We’ve all seen—or most likely been—that girl with two inches of grown-out roots shining like a beacon of light from her scalp. It kind of feels like everyone is silently judging your hair (they aren’t; nobody really cares). And while we’re not saying you even have to bother dying your hair at all, we know what it’s like to want to run from gray hair as long as possible—but unless you have an unlimited supply of cash and free time to trek to the salon every month, your options are kind of limited.

Sure, you can try a root touch-up dye—though, good luck finding a shade that perfectly matches the rest of your hair and won’t stain your scalp—or dust your roots with a cover-up powder (which will inevitably get all over your forehead and fingers by noon), but realistically, the only sure-fire disguise is a hat. At least, that was the case before hairstylist Anh Co Tran got involved and created a solution.

If you’re not familiar with Anh Co Tran (which you totally are, because he, along with colorist Johnny Ramirez of Ramirez Tran Salon, has created all of the sun-kissed, beachy, textured waves re-pinned a billion times on Pinterest), he’s basically a hair god. I could keep waxing poetic about Ramirez-Tran creations, but their recent transformation speaks for itself:

Yeah, we told you. Perfection. And because Co Tran spends much of his days staring at the before half of a before-and-after, he knows his way around grown-out roots—and the products that supposedly help disguise them. “When I’m on set and a model or celebrity has visible roots, I need something that can hide them really well and really quickly,” says Co Tran, who used to keep dark eyeshadows in his kit to brush over their roots as a last resort. “I know there are a ton of root touch-up powders out there already, but most of them have this big nozzle that sprays the colored powder everywhere,” he says, “and if the powder gets on a girl’s face, the makeup artist will kill you.”

So Co Tran worked with L’Oréal Professionnel (he and Ramirez are ambassadors for the brand) to develop a product that would stick to your roots and nothing else. The result: L’Oréal Professionnel Hair Touch Up, a silicone-based spray with the tiniest, skinniest of nozzles—as small as the nozzles on compressed air that you would use on keyboards—so the powder stays concentrated on the roots, rather than the rest of the hair. And, because the pigments in the formula are so finely milled, they attach themselves to each strand of hair, rather than sitting on top of your roots like a weird mask. 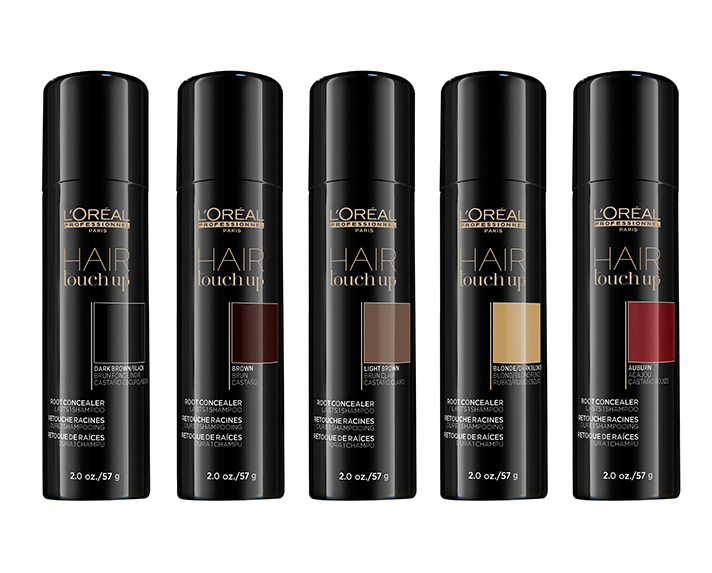 And root sprays aren’t just for covering gray hair. “On a recent photoshoot, I did boxer braids on a girl with dark, brunette hair, and you could see her scalp between the sections of braids,” says Co Tran. “The contrast between her dark hair and white scalp made the braids look thin and weird, like she had no hair, so I toned down the brightness by spraying just a bit of the powder on each side of the braid to give the illusion of fuller hair, and then sprayed it around her forehead and baby hairs to make her hairline look thicker and her forehead look smaller.” Other than being an excellent trick, this is also a great reminder that everything you see in pictures is fake.

MORE: 25 Insane Braids That Are Fully Unattainable (But Still Fun to Look At)

And no, we’re not just spewing out a rave review: We tried out this hack on an editor with tight French braids and pretty steep widow’s peak, spraying it along the roots and around the forehead. The results were actually kind of crazy; her hair did look significantly thicker, and you couldn’t tell that there was powder covering her scalp. But as soon as we went overboard and sprayed a little too much, her hair looked powdery, so take the less-is-more approach when using a touch-up spray.

Next, we had another editor—a proclaimed connoisseur of root sprays—try it on the gray hairs scattered along her thick curls. “The coverage is actually really great,” she said, noting that the spray had zero problems hiding her grays, “and as someone who is constantly playing with her hair, I can say that it doesn’t rub off on your hands like a lot of other products do. To be honest, it didn’t feel like I had anything on my hair at all, which was clutch.”

Though the testers didn’t get stuck in any thunderstorms—meaning they can’t for sure say how well the powder will hold up in torrential downpour—they both agreed that it stayed latched on to their hair until they showered. And of course, this isn’t meant to be a permanent fix—each bottle will last you two-to-four weeks, so sooner or later, you’re going to have to make that salon appointment. But, hey, if a $25 bottle of powder can help us and our wallets skip a month of coloring, then we’re all about it. The only downside is that it’s currently only available in salons (so, yes, you’re going to have to physically go to a salon to stock up, or buy a bunch during your next hair appointment to hold you over for a few months), so check out the locator to find a L’Oréal Professionnel salon near you. And until then, maybe invest in a really fashionable hat to hide those roots, or just yell to the world, IDGAF. Either or.