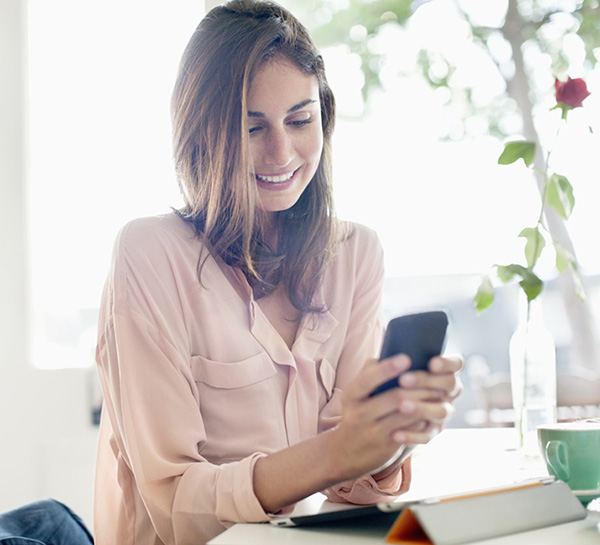 We all want to look our best in photos, but terrible photographs are not unheard of. Whether we’re bloated, wearing the wrong outfit, or just get caught on a bad day, unflattering photos can plague us (and our self-esteem) long after the day they were taken. We won’t always look flawless in front of the camera’s lense, but these tips will certainly help us to appear better … and maybe even a little thinner, too.

Consider the “visage.”
Imagine a line that starts at the right tip of the eyebrow and encircles the face, hitting the tip of the chin, the edge of the left brow, and across the brow at the hair line. “One of my early cinematography professors referred to this as the ‘visage,’ and is the part of the face that works in the photographic image,” says Monique Anair, Assistant Professor of Film Production and Media Studies, Santa Fe Community College. “Place the camera slightly above you and place your chin down and look up with your eyes. See where the visage now resides in the frame.” When taking photos, use soft light that highlights the “visage” and gives you a “catch light,” which is that quintessential sparkle in your eyes.

Create gaps.
Put your forehand—the one closer to camera—on your side to make a triangular gap between your arm and your body. When those two are close, it makes your body appear bigger, says Aiden Rhaa, a wedding and portrait photographer based out of Boston. Put your toes together and heels apart—it creates a gap between the legs, making them appear thinner. You can also try crossing your legs, which lessens surface area seen by the camera, Rhaa says.

Consider positioning.
Turn your body sideways toward the camera. Less overall surface area seen by the camera equals a slimmer you in the picture, says Rhaa.

Check your posture.
Keep your back straight—slouching can make it look like you have a few more pounds around your belly area, Rhaa says.

Find the right light.
If you have control over the lighting of your photograph, be sure to choose natural light. Be photographed in natural light, if at all possible. “If nothing else, kill fluorescent and other harsh lighting and use natural light from a window, though you want to avoid glaring light,” says Drew Plant, an Atlanta-based PR strategist, who has to take photos of clients regularly. Avoid harsh direct light: “That can mean anything from a can light directly over your head to the high, harsh overhead sun midday or a bright lamp next to your computer,” Plant says. If you can capture the photo without using your flash, that’s great, though you also can manipulate the flash to “knock out” shadows, wrinkles, sagging, and other unflattering facets that make us all look heavier and older.

Don’t overuse filters.
Filters and other technological “enhancements” are common and easily accessible, but it’s easy to over do it, says Plant. “I had a client who digitally enhanced her own photo so much that she was unrecognizable!,” he says. There is no “win” in doing so if other folks will eventually see the real you rather than the filtered Instagram version.

Eat right.
Avoid bloating foods in the day or days leading up to events where you know photos will be taken, says Plant. Lay off the booze and sodium-filled foods and opt for water and “clean” eating. Among other things, this will help reduce eye puffiness, which can telegraph weight in the face.

Dress smart.
You can use simple wardrobe styling techniques to appear thinner in photos. “First and foremost is fit. Wearing the proper fit of wardrobe will instantly show slimness in your look,” says Laurie Brucker, a certified image consultant and speaker. Brucker explains clothes should be slim to the body frame, tailored and in the proper proportion. Items like a structured and waist defined blazer over a blouse will create slimness, and vertical lines help lengthen your look. “A simple trick is to wear a blouse and pant in the same color tone, such as a navy blouse and dark denim,” Brucker says, then wear a boldly colored or contrasting blazer over top. “The open jacket edges will create vertical lines for you down the center of your body, which in turn will help you appear slimmer,” says Brucker.

Get some sleep.
It should go without saying: Get some sleep! If you look rested, you’ll look better, younger, and thinner, both in photos and in your day to day life.