Let’s get this out of the way: Save for a touch of highlighter or the addition of a new brow pencil, I’ve had the same makeup routine for the better part of the last decade. Sure, I’ll swipe on an extra coat of mascara if I’m headed to a wedding, or I’ll throw a tube of lipstick in my bag if I’m truly feeling ambitious, but other than that, it’s the same six-minute routine every single morning: mist, serum, moisturizer, sunscreen, primer, BB cream, concealer, highlighter, brow pencil, and done.

To the untrained eye, nine steps seems like seven steps too many for someone who refers to themselves as low-maintenance, but still: I don’t fuss with eyeshadow palette, I’ve never walked outside with a smokey eye, and I couldn’t imagine fiddling with lipliner or worse, liquid liner at 8 in the morning. I mostly can’t be bothered with concealing my under-eye bags, and if my skin looks truly tired, I’d rather go without makeup than piling it on in an attempt to disguise. This generally results in me looking some version of the same, save for the days I’m really tired. Those days, I look not good. I’ve learned to live with it.

MORE: The 13 Best Lip Glosses That Look Nothing Like Their ’90s Counterparts

So imagine my delight when I discovered a way to make myself look more awake as I’m literally walking out the door—no mirror needed. It started a few weeks ago when I realized I had to run out to a meeting in the middle of the work day—I was already late so I didn’t have time to freshen up, and all I had on me was my Glossier Balm Dot Com in Cherry. As I was in the elevator, I dabbed some on my lips, and then my cheeks, and then my eyelids. I’m not totally sure what compelled me to do the latter—especially considering I don’t wear eyeshadow—but when I got to the meeting, the PR rep swiftly complimented my look: She told me, the palest olive-skinned woman alive, that I looked well-rested and sun-kissed which I laughed off because I cower in fear of the sun.

But when I caught a glimpse of myself, I had to agree: The all-over hint of color left me looking cohesive and put-together in a modern way, rather than the clownish nightmare I’d imagined. And sure, lipgloss on the lids isn’t a new idea, but for regular folk like myself (see: not an editorial model), it always seemed like one of those things that was better in theory. Not so, reader. Not so. 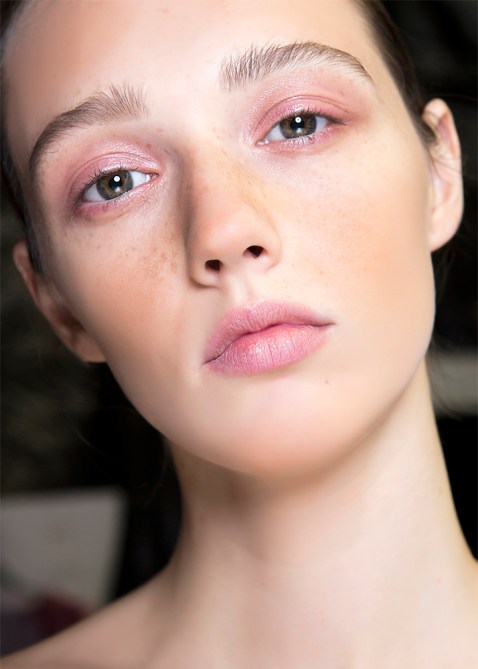 The best part of the look is that it works well for everyday wear, especially if you keep the color concentrated on the center of the lid, extending just above the crease. I’ve since played around with it a bit and found that a touch of highlighter, then red lip balm (I’ve used both Glossier’s iteration and Rosebud Salve), and then NYX’s Lid Laquer makes it look both intentional and downright pretty.

In fact, during a recent date night for Valentine’s Day, I got extra-ambitious and applied the lip balm around my eye a la Au Jour le Jour’s spring 2017 show (as seen above), and though it looks unbearably sticky, it feels pretty similar to having a thin face mask on. My boyfriend didn’t even mention the new look throughout the date, but when we went out again this weekend, he looked at me and said, “You look great babe, but aren’t you gonna do that eye thing again tonight?”