It’s been a while since we had some Lindsay Lohan news and I’m pleased to inform you, she’s here and she’s not going anywhere. Although her show Lindsay Lohan’s Beach Club has reportedly been canceled and her Mykonos beach club closed (though some say it moved to Athens), she’s apparently up to something interesting. At least if you’re anything like me and you think Lohan’s big haircut means things are on the horizon. But what could it be?

Lohan and her hairstylist Jhonatan Rendon both shared a shot of them on Instagram. Rendon tagged it #shorthair and #hairbyjhonatan so it would be fair to say he’s responsible for her shoulder-grazing lob. He also tagged R+Co haircare and Obliphica Professional so it would seem he used both of those healthy-hair brands on LiLo. We can’t tell if there’s a color change in the black-and-white photo but it looks like there could be some lighter highlights. “LLOHAN IS MYKONOS,” Lohan captioned hers. It’s a big change for Lohan, especially considering she’s been wearing her mane all the way down to her waist as of late.

While a ’90s-style lob is trending like crazy (just look at Kendall Jenner, Hailey Bieber and Margot Robbie, for example), Lohan’s cut feels like a major #TBT to her childhood. It gives us serious Parent Trap vibes. In case you’ve been living under a rock, the iconic 1998 film starred Lohan as identical twins Annie and Hallie. Lohan’s characters had all sorts of late-’90s hairstyles, including the layered lob that flips out a bit on the ends. 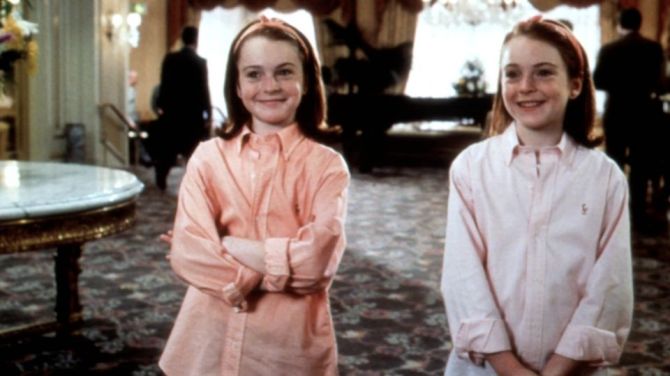 Now all Lohan needs is a headband and an oversized collared shirt and she’s good to go.