You know the feeling when your coveted Kylie Lip Kit finally arrives in the mail and you can’t wait to open it? Imagine that feeling being ruined by dozens of live, crawling ants—yes, you read that right—scattered throughout the package. This is exactly what happened to buyer Em Venditte, a.k.a. emilyempress on Reddit, August 21 when she opened her makeup kit.

Venditte posted on Reddit Makeup Addiction that she “noticed a bunch of ants inside and outside the package with weird food particles inside.” Truly, we ask, what the fuck? Take a look for yourself, and make sure to scroll, to see how many ants are inside this package (warning: it is disgusting):

MORE: 7 Liquid Lipsticks That Will Revolutionize Your Makeup Bag

The worst part, though, is Kylie Cosmetics’ lack of action in response. This is a major blow to a brand that has already been struggling to match up against Fenty Beauty and their diverse foundation shade range while also facing backlash from Kylie customers about the spike in prices for her new “Birthday” collection, whose products ring in at $325 apiece—nearly double the $125 that similar products cost last year.

Venditte had to reach out to the company three times before getting any sort of real response. She emailed the company the day of receiving the package with her complaint and received a reply the next day, stating that Kylie Cosmetics would ship her a new package in 7-10 days. Yet, 20 days later (excuse me, what?!) she still had nothing. Venditte ultimately took to social media in hopes of garnering some sort of apology from the company, “My third time reaching out is now through social media trying to get the attention of the company and share my story with reluctant customers.”

MORE: Kylie Jenner Opens Up About the Real Reason She Got Lip Injections

The post on Reddit that went live on Wednesday exploded with over 288 comments, most of them detailing something along these lines: “Unacceptable and completely horrifying!!!” Honestly, we’re having the same reaction. However, some people wondered whether the ant mishap happened during the shipping part of the process. But Reddit user alittlebitlittle says, “Even if it happened during shipping, any company with halfway decent customer service would replace this item or at least not wait 20+ days to contact the customer, even if only to avoid bad publicity!”

Well, it looks like Kylie Cosmetics was a little too late in avoiding the bad publicity when customer service manager, Amelia, sent Venditte this email on September 12, which Venditte posted here: 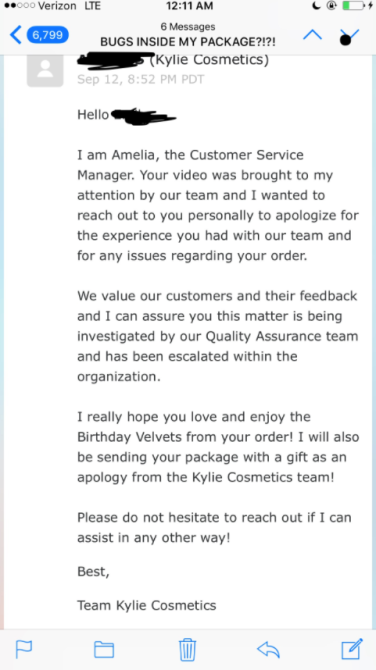 Venditte is getting a new lip kit, but at what cost for the company? As of now, they still stand strong as evidenced by the success of the lip kit sales, but we can only hope they improve in the future. Small grievances—and this horrifying, gross one— add up. And with the makeup industry booming with new lines and choices, Kylie and her team better step up to show they are here for the customer.