After a telling hint on “Keeping Up with the Kardashians,” Kourtney Kardashian confirmed an upcoming makeup collaboration with her younger sister, Kylie Jenner, and her beauty company, Kylie Cosmetics. The 38-year-old reality star revealed the big news on her Instagram stories with a snap of her brain storming logo ideas.

Though it’s fair to assume that Kourt x Kylie will include lip products (an eagle-eyed fan spotted a clear lip gloss in a “KUWTK” episode), the collaboration could feature anything. Now to wait for Kylie to chime in on the news. 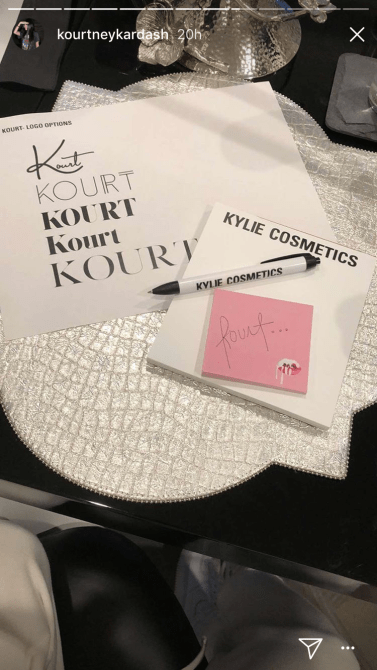 So far, Kylie Jenner has collaborated with three of her four sisters (a lip kit with Kim, a makeup collection with Khloé, fashion lines with Kendall), and soon, she might make it four for four. The 20-year-old Kylie Cosmetics founder’s next business venture might be with her eldest sister, Kourtney Kardashian—at least, according to this very telling clue on “Keeping Up with the Kardashians.”

On Sunday’s episode of “KUWTK,” Kylie might have teased some huge news. (And no, it’s not about her rumored pregnancy.) Instead, it was a mysterious beauty product, which many believe to be a part of a future collaboration with her 38-year-old older sister.

In one scene, screen-shotted by an eagle-eyed “KUWTK” fan, five Kylie Cosmetics products can be seen lying on a table. Four of the products were easily identifiable as lip glosses from Kylie’s signature lip kits, while one product—a clear and slightly larger tube with the word “KOURTNEY” on the side—stood out and raised a few eyebrows.

Because of the clear Kourtney-themed marketing, fans were quick to assume that the product (likely a clear lip gloss) is part of a yet-to-be-announced collaboration with Kourtney.

Of course, like the many rumors swirling around her pregnancy, Kylie hasn’t confirmed the news. Though with the speed of how much Kylie Cosmetics is expanding (concealers, lipsticks, brushes), we wouldn’t doubt that a Kylie x Kourtney collaboration is on the way. Guess we’ll just have to stay tuned to her Instagram to find out.