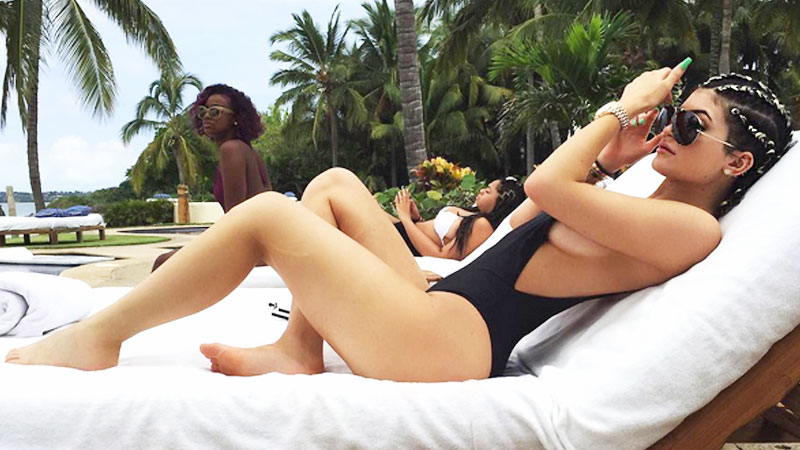 I’ve been wearing the legendary cornrow hairstyle since my days in elementary school, but I officially fell in love with them during my high school years. As an athlete, they were both functional and a way to look incredibly badass. Mine were always grazing my waist—in a sea full of halter tops, skin-tight 7 For All Mankind jeans, and just-released Nikes, a girl had to stand out, you know?

My love for the ‘do hasn’t waned over the years, and I leaned on cornrows several times this (especially humid) summer. I’m clearly not the only one aware of the magic that emanates from braids, as famed sister duo Kendall and Kylie Jenner have recently been spotted wearing cornrows on Instagram and during vacations in Mexico and St. Barths. This isn’t the first time the girls have been seen with cornrows, or have even made news because of them (Kendall was actually anointed the veritable “Bold Braid Princess” back in April 2014 by Marie Claire to much outrage.)

Last month though, frustration with the Jenner’s choice of coiffure reached a fever pitch thanks to “Hunger Games” actress and activist Amandla Stenberg. When Kylie posted a pic on Insta with her hair in cornrows and the caption, “I woke up like disss.” Stenberg took her to task. “When u appropriate black features and culture but fail to use ur position of power to help black Americans by directing attention towards ur wigs instead of police brutality or racism #whitegirlsdoitbetter,” she commented.

The 16-year-old had a point– and a poignant one at that.

Our country is a hotbed for racism and bigotry and has been since its inception. The recent events in Charleston, Ferguson, Baltimore, and a slew of other cities only show that we have a long way to go when it comes to truly eradicating the States’ racial fault lines—or even acknowledging that they exist. And what does a simple hairstyle have to do with this? Well in fact, a lot.

To be clear, African-Americans do not own braids, but cornrows indubitably harken back to ancient Africa, BC. For certain tribes, they denote societal status, age, and so much more. In 2015, perhaps a topknot means you’re having a bad hair day or an asymmetrical cut means you’re experimenting with something edgy, but for Africans, the meaning of cornrows runs incredibly deep. They’re also a cultural event of sorts: anyone who’s visited a hair-braiding salon can attest to that.

And when we were brought here after the horrendous Middle Passage, many slaves had their heads shaved; meaning a part of their heritage was lost. Slaves who worked in the house were often allowed to wear cornrows of a certain ilk, but I’m sure you don’t need a history lesson on that division.

Yes, the Kardashians and Jenners have a wealth of very real black friends, boyfriends, and ex-husbands, but for some reason, most of us just can’t shake that prickly feeling of appropriation from time to time. And perhaps this is in part due to fashion—an industry to which the family is now inextricably linked.

Of late, we’ve seen cornrows, face piercings, and Maasai warriors traipsing down the runways without a single tie-back to the cultures from which they originated. This in turn presents them as trends, instead of what they really are: societal emblems of communities far removed from us in more ways than just geography.

What’s missing for me in the Cornrows + Jenners equation is a proven acknowledgment of the situation. A post of one of the countless black celebrities who’ve worn cornrows beautifully throughout history with the simple caption “Inspired” would show that the sisters—who have a combined total of 68.5 million Instagram followers—actually get it.

I’m not holding my breath for the teens to make that happen anytime soon, so for now, I have no gut-wrenching issue with them continuing to wear their hair as they please. Cornrows are cute (we figured that out a long time ago) and very versatile. A small show of recognition would only gain them additional respect, but maybe—hopefully—that’ll come with age.