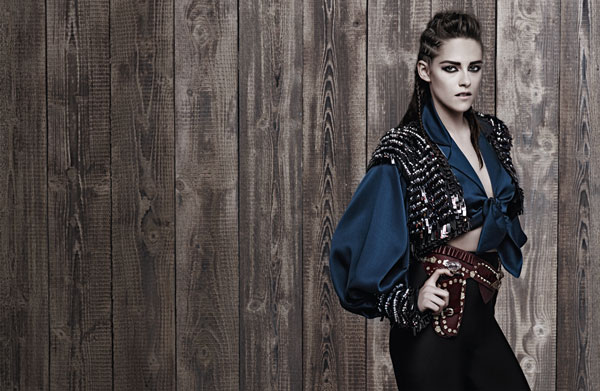 For an actress who typically goes sans makeup (or shampoo, for that matter), Kristen Stewart sure looks like she knows how to wear the latest beauty trends in her new Chanel campaign. No newcomer to being the face of a brand — who could forget those topless Balenciaga campaigns? — Stewart’s Chanel gig was announced back in December. Karl Lagerfeld chose the actress to star in the brand’s Paris Dallas collection campaign, and now that we see the shots, it’s clear to see Stewart was the right choice.

Donning some serious graphic eyeliner, bold brows, and cornrows that make us want to immediately DIY the hairstyle, Stewart manages to make wearing the latest beauty trends look effortless. At first, we were a bit skeptical of Lagerfeld’s choice, considering Stewart’s penchant for a bare face and a pair of Converse sneakers, and it seems we weren’t the only ones. In an exclusive interview with Grazia Daily, Stewart said, “Typically I wouldn’t see myself as being the quintessential face of Chanel with the pearls and the classics but I liked stepping into that role and this suits me a little bit more than past collections because it is very American. I can’t use the word bad-ass but there is something about it that is fun… fierce.” Whatever apprehensions we had about Stewart as the face of Chanel have completely melted away after seeing these shots, which make it completely evident that the girl deserved the campaign.

Head over to GraziaDaily.com for all of the behind-the-scenes shots from the campaign!