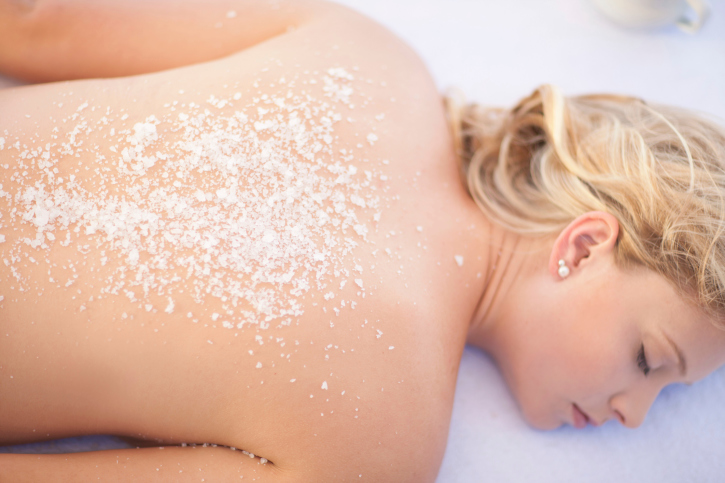 One doesn’t often think of spas in terms of survival and harrowing experiences (well, outside of the waxing room perhaps). Nor did I, upon accepting an invitation to a “girls night” get-together for a good exfoliation session at a Korean spa after work. I’ve always been regimented about exfoliating my face, but save for the occasional scented body scrub (which are usually more nicely scented oils than scrubby bits) I never really minded the parts of my body below the neck. My skin is generally pretty problem-free in terms of texture issues, so if it’s not broke, don’t fix it, right?

I would soon learn that there was much material to fix—or remove, rather. Korean spas are known for their immaculately thorough body scrubbing treatments, among other things, so best to go to the best for the ultimate body exfoliation, right? My friend organizing our evening spa plans chose Juvenex Spa in K-town. We all signed up for the Purification Package which included an “Invigorating Korean Style Salt Glow Scrub.” The road to invigoration is not for the squeamish however. Not unlike the Russian and Turkish bathhouses we have in the East Village in NYC, this treatment errs towards the end result more so than a relaxing journey getting there.

MORE: All Your Spa Questions Answered

Check your modesty at the door. For starters, you’re completely naked. If you’re not comfortable with that, this probably isn’t for you. Lying on a cushioned (yet waterproof) table, my exfoliation technician (for lack of better term) had a large colorful five-gallon bucket (it looked a bit like the ones that children store their toys in) full of warm water on the floor at the head of where I lay. She used a plastic bowl to scoop water over my body repeatedly. I felt a bit like a beached dolphin in that respect. Warm water feels nice though, raining down in the shower or even when it’s being splashed all over your naked body by a stranger. This, I’m told, is to get the outer dead skin layer nice and soft in preparation to loosen itself from my body.

Brace yourself and hold onto your hide. And now for the actual scrubbing. Using scrubby mitts (their official name, as far as I am concerned) she went to town using long firm strokes on my arms, legs, torso, neck… and all of the crevices. Anyone going into this should know that this is INTIMATE. There’s no warm white towel nicely draped over your private bits, like when getting a couples massage. You will be naked under fluorescent lighting, POSSIBLY with a stranger (or a friend, if you bring them, like I did) getting the same treatment on the table next to you. Not all spas have private rooms, this just happened to be one of them.

Scrubbing was interspersed with more warm water being thrown over my body to rinse away the dead skin that was pilling off my body like eraser dust. At one point when I was on my belly and my scrubby-mitted aesthetician was going Round II on my arm, she chuckled, “This your first time with scrub?” Yes, I replied meekly. She tapped my forearm, indicating for me to look. “Ya, I see.”

What’s seen cannot be unseen. This is where it gets real. I had kept my eyes limply shut most of the time so as not to get splashed in the face and because part of me feels that it’s less awkward that way. Once I had peered at my arm mid-scrub what I saw were gray rolls of dead skin the length and girth of earth worms. It was like a Fear Factor episode where the contestants were covered in worms and snakes, but it was my own body shedding approximately twenty-something years of excess skin cells. The lady chuckled again at my expression and mercifully, threw some more water over me, rinsing my dead skin rolls to the floor.

Rejoice your freedom from a chrysalis of dead skin. The whole scrub session lasted about a half hour with two and sometimes three passes over the same area—basically, until no more dead skin rolled off. After a few more rinses, a nicely scented almond oil was applied to my extremities to hydrate my tender and probably shocked skin, and I was sent off to the sauna to dry off.

I’m no wimp when it comes to uncomfortable beauty treatments. I can wax without wincing and have no issues with any body parts. When my own secret grime was essentially unearthed, much to my disgusted fascination, losing my Korean spa virginity was most definitely a notable beauty experience—and yes, I was very much so invigorated and perhaps to my surprise (and to my skin’s) will be back for more.