It’s 2020 and I think we all know that social media isn’t real life. It can be hard to remember sometimes but it’s still literally a filtered view of people’s skin, body and life altogether. That’s why, when we see something that looks real, it can make us feel pretty great. A photo of Kim Kardashian’s skin recently went viral on Reddit because of this exact thing. People found a photo of her in which they think she looks refreshingly normal. She has pores! What a concept.

“Her pores… her skin looks legit almost like mine. It’s hard to believe how fake the standards are,” reads the first comment on the Reddit thread. “Same! I always thought my pores were humongous, but they’re very similar to how hers look. Her skin texture is also similar to mine. This is crazy,” one fan commented.

What’s really crazy is how we’ve come to think the airbrushed images are real. When I saw this photo of Kardashian, I didn’t think much of it. I saw a really pretty woman with fierce brows and full lashes. I wondered what mascara she uses. (Is it KKW Beauty?) But I wasn’t surprised she has somewhat noticeable pores because of course she does. She’s human. 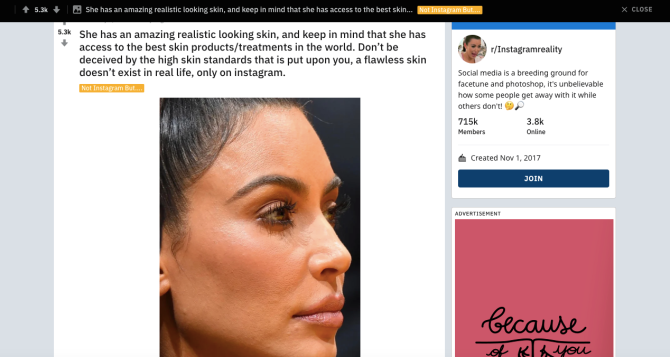 I don’t blame people for forgetting though. The Kardashian-Jenners, and numerous other celebs and influencers, use social media filters on the daily—even when showing a beauty product we need to actually need to see on skin. Even if they’re not using the newer filters that actually change your face shape, they’re at least using the skin-smoothing Paris filter.

Luckily, things are starting to change. Companies including CVS, Target and American Eagle regularly feature beauty and lingerie ads without Photoshop. There are influencers and even some celebs posting #nomakeup photos sans filters to show what real people look like. It’s a small step in the right direction.

Now, if you want to have fun with filters, there’s nothing wrong with that. We’re all about choice, here. But when we’re all Facetuning so much that we forget what skin looks like? Well, that’s a little scary.