If there’s a family (or person) that can speak a trend into fruition, it’s definitely the Kardashian-Jenner clan. Whether you follow the famous sisters religiously or not, it’s no secret that these sisters have major power in the fashion and beauty space and have no shame in proving it. So when we saw Kim Kardashian’s nails have French tips, we had to take a pause. French manicures have long been considered passé, but are they poised for a 2019 comeback?

When you think of old-school nail designs, the white-tipped, classic French manicure is likely one to top your list. It was majorly trending in the late 1990’s and early 2000’s, but since then hasn’t been spotted much in recent years in its original iteration. Neon and colored editions have been seen on the runway, but those definitely have a more modern effect. In her typical fashion, Kim K. took to Instagram to show off her freshly-painted French manicured tips, and now we wouldn’t be surprised if this clean nail look came back in a major way. 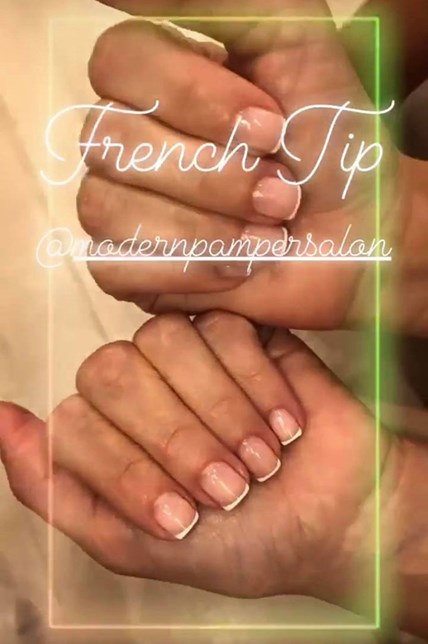 While we must admit to being surprised by Kardashian’s minimalist mani-choice, we aren’t mad at the outcome. The reality star usually sports a nude hue, but she’s rarely caught without her square shape (which she’s previously shared she files herself, even before salon visits). But for a woman that can choose practically any nail art she desires at any moment, this look might just be the last we’d think she’d pick. But therein lies the genius: TBH, I want to take this picture to the nail salon and have it recreated, now.

The detail we noticed most about Kardashian’s French tip mani is her choice to keep the nail bed practically clear. The old-school version often required a pinkish and rather thick nail color to cover the base of the nail, and we have to admit the clear-coat-only version feels fresh.

Whether she’s reincarnating the old school nail design because #fashun, or it’s simply the easiest to maintain when juggling a career, married life and multiple kiddos, don’t be shocked if this becomes the first major nail trend of 2019.