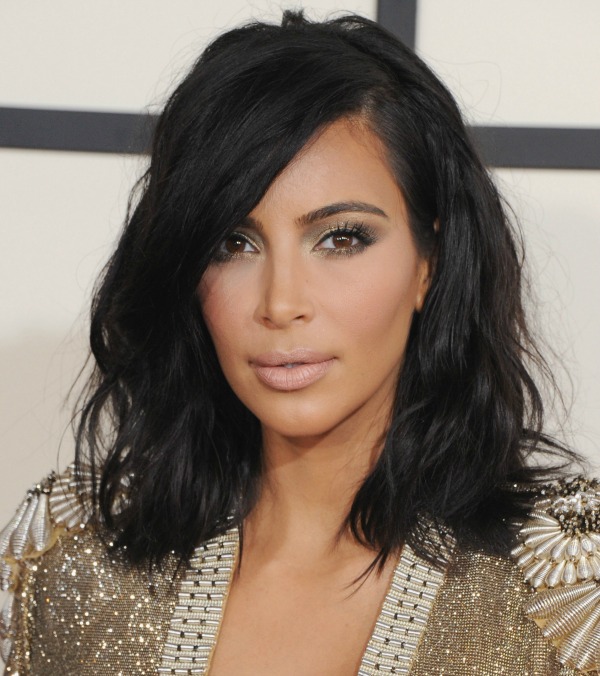 Some may tell you not to make a drastic hair change before a big event, but Kim Kardashian doesn’t play by those rules. The star shockingly debuted her freshly-chopped lob on Instagram only two days before she attended the Grammys on the arm of her husband Kanye West and shortly after the launch of the much anticipated Kardashian Beauty hair care line—one that’s complete with product and hair tools. Talk about impeccable timing.

MORE: The Best Beauty Looks at the Grammys

For her first short-hair red carpet appearance, Kim put aside those Old Hollywood waves we see her wearing so often for tousled, beachy waves and a side-swept bang created by celebrity hairstylist Michael Silva. “Our inspiration was a reference I pulled of an editorial image of the eternally cool Kate Moss,” he explained. This goes as no surprise, as Kim has mentioned before that Kate Moss is one of her personal style icons.

To get the look, Michael layered Shu Uemura Ample Angora Volumizing Mousse and Bumble and bumble Surf Spray in Kim’s hair, applying Kerastase Touché Finale Serum only at the bottom. “I rough dried the hair then set it in an S-wave. I used a little flat iron and finished with the Kardashian Pure Glitz Hairspray,” he explained.

The metallic smokey eye makeup that Kim wore was inspired by the neck-plunging Jean Paul Gaultier metallic gold dress she walked the red carpet in. “The dress was a champagne color vintage Gaultier, so I went with green and golden metallics on her eyes,” said celebrity makeup artist Mario Dedivanovic, who completed the flawless look.

Mario layered in three different shades of Anastasia Beverly Hills Single Eyeshadows to create the color of her lids. “Soft gold all over as a base and more on the inner corners, Emerald along the crease and outer corners, and Moss swept along the lower lash line together with the soft gold shade,” he said.

He continued by applying a few Kardashian Beauty Individual Lashes on the outer corners of Kim’s eyes and then layered a coat of L’Oreal Voluminous Mascara in Carbon Black on top. “I used NARS Blush in Orgasm on the cheeks and Eye M Glam Highlighter on the cheek bones and bridge of the nose to highlight,” he explains. Kim also wore Charlotte Tilbury’s Supermodel Body shimmer lotion on her body.

While the hair was a bit unexpected, the lip hue Kim chose to wear was anything but that, as a nude lip is a Kardashian (and Jenner, for that matter) specialty. To finish off the look, Mario used Tom Ford Ultra Shine Lip Gloss in Naked. Guess lip gloss is still rockin’ after all!

MORE: Sia’s Wig at the Grammys Wins for Craziest of the Night