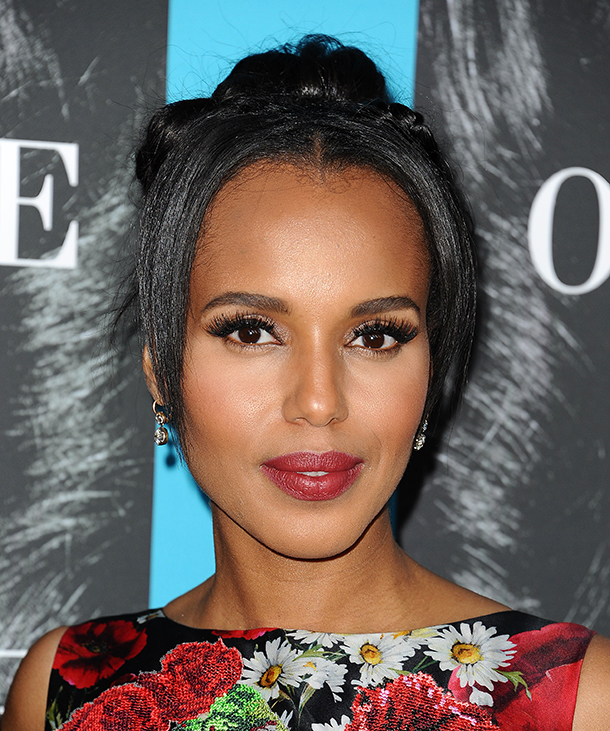 Tonight is an exciting night for Kerry Washington fans, as HBO’s Confirmation premieres with the actress portraying Anita Hill. The film is based on the infamous 1991 Supreme Court hearing, and as such, Washington’s look will be a departure from her signature modern-glam aesthetic. Earlier this week we spoke with Confirmation makeup artist Anita Gibson, who has worked with Washington since 2004. Our conversation touched on everything from Gibson’s behind-the-scenes techniques to the contents of her makeup bag. Here are a few highlights.

The hearing that Confirmation is based on took place over 20 years ago. What was your approach to creating Washington’s look using modern products?
Anita Gibson: Makeup has come so far since the early ’90s, so we had to be very careful about what and how much we used; it needed to look authentic. Instead of stick or bottle foundation, we did an airbrush application on Kerry’s skin and kept the makeup tonal. The eyes were pretty natural—we did mascara, a little black liner, and a taupe eyeshadow. The most important thing, which is something a lot of people think of when they think of Anita Hill, was the berry lips. We found her Revlon shade on Amazon.

Is there anything you do as a makeup artist on set for a film that people shouldn’t be doing at home?
I wish that people would stop over contouring and highlighting—it’s getting ridiculous now. We contour and highlight because if there isn’t proper lighting on set, you need the makeup to compensate for that. So we’ll highlight under the eyes and give the T-zone a highlight, and we’ll contour to give the face a bit of structure, but even that is done with a gentle hand. For film you need to do that, but it’s not necessary for everyday wear.

If you were doing Washington’s makeup for the red carpet, what look would you put together?
I’d give her a fresh face and strong lashes and line her eyes with a black or charcoal pencil. And I’d probably do some blush on the cheeks and a strong lip—either a bright pink, a red or a deep burgundy.

What are your favorite products right now?
I love the Tom Ford Stick Foundation ($80, nordstrom.com)—I think it’s the best foundation out right now; the coverage is incredible. My favorite liner is the L’Oréal Voluminous Smoldering Eye Liner ($10, ulta.com). It’s so soft; you can really get inside the waterline with it and create a strong, bold eye. As far as blush, I’m currently stuck on L’Oréal Visible Lift Blur Blush ($13, ulta.com). It looks so natural and adds just enough color to the cheeks. Huda Beauty has the best lashes out there in my opinion, and for lip color, I’m all about Anastasia Beverly Hills Liquid Lipstick ($20, anastasiabeverlyhills.com).

More from Daily Makeover: Amazing Beauty Inspo from the “Game of Thrones” Cast