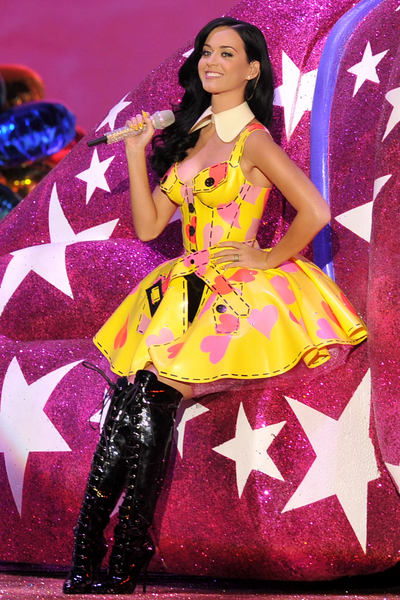 The “California Gurls” singer–freshly back from her honeymoon with new husband Russell Brand–looked stunning as she poured her curves into a Todd Thomas low-cut purple bustier, while she belted out a medley of her hits. Katy also wore a yellow PVC dress covered in pink hearts and thigh-high black boots, much to the delight of the crowd.

Model Adriana Lima opened the New York show in a giant set of wings and marked her return to the catwalk for the first time since giving birth to daughter Valentina last year. The 29-year-old beauty admitted she worked hard so she was in top shape, saying, “To be back in shape for the fashion show, it wasn’t easy for me. I really worked very hard.”

In addition to Katy performing at the Victoria’s Secret show, singer Akon also
performed, singing his new song “Angel.” Speaking about the models, Akon said, “You see them in person, it’s like a whole other thing. They’re amazing, they’re beautiful.”

The 2010 Victoria’s Secret Fashion Show will air on Novemeber 30 on CBS.

Try on Katy Perry’s hairstyles in the Makeover Studio!