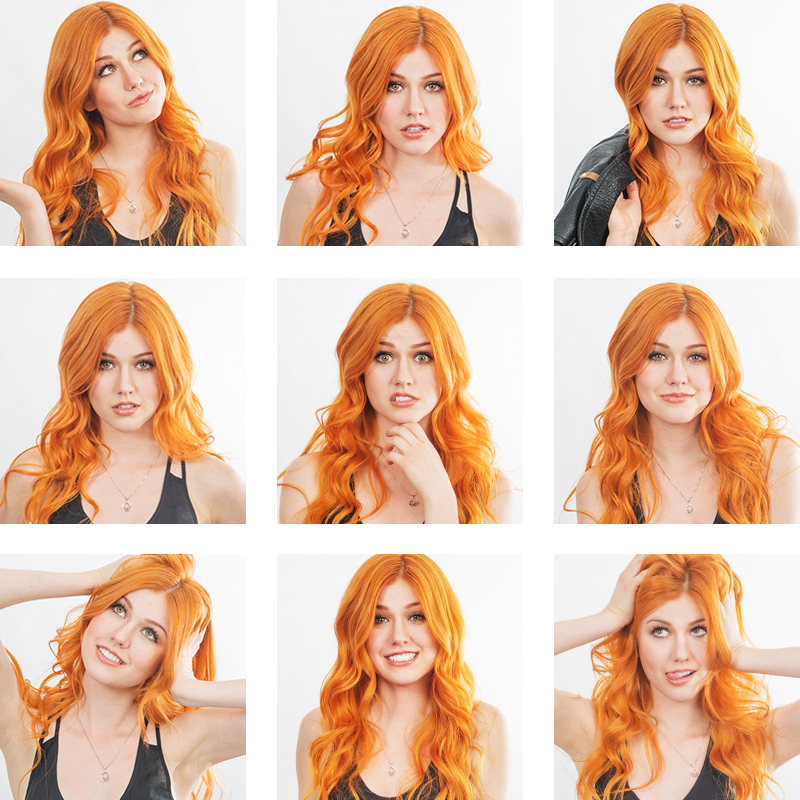 Around here, we’re quick to warm up to anyone who can flawlessly pull off both bright-blonde hair and siren-red locks within just a few short months, but when Katherine McNamara (of ABC Family’s upcoming “Shadowhunters” and the star of new sci-fi thrilled “Maze Runner: The Scorch Trials”) tells us she also does her own fight scenes and is obsessed with Sephora, it’s love.

The energetic 19-year-old made a quick stop at our studio recently, where she got candid about her go-to beauty tricks, hair habits, and love of baking. Read on to get to know this rising star!

You change your hair color a lot. You were strawberry blonde, you’ve had blonde hair, now you’re bright red. What color are you dying to try next?
I’ve always wanted to do something crazy. I kind of want to maybe add teal highlights, or blue ends or do something absolutely wacky. I actually did another job where I had to dye my hair like a really, really dark brown—almost maroon and I didn’t know if I could do it with my hair, but they actually ended up wigging me instead and it was kind of perfect. And also, my hair didn’t have to look nice for a whole month—it was amazing.

SO excited to finally reveal my new look and character for #MONSTERVILLE! Meet Lilith… xx

What are your go-to hair products?
Oribe is my favorite thing, I adore it. I call it a miracle product, it’s called Oribe Supershine Light Moisturizing Cream and I put it in my hair and it will keep the curl for hours and hours and if I let it just sit for like a day it’ll help it fall and kind of guide it into this nice, loose beachy-ness. And it smells so good, all of Oribe’s products smell amazing. I just wanna bathe in it! I actually use a lot of Oribe products on set as well because they’re so fantastic.

Okay, so you’ve been on sets quite a bit. What have you learned from makeup artists or hairstylists?
So much! Basically, I had no idea what makeup was really when I started working in television. Makeup artists always call me a peeker because they’ll be doing my eyes and my other eye will be open watching them because I want to learn! I’m constantly taking pictures of the products they use or the box and buying them later and really learning the techniques and different ways in which they apply things.

One thing I learned from a makeup artist on “Maze Runner” is that, you know those Clinique Chubby Sticks? They can be used as blush as well. But that’s what they did with us because we wore very, very minimal makeup. We had BB Cream and the tiniest bit of eyeliner, and they did our brows—that was the most important thing. But we used the Chubby Stick as a blush and the lip just so it would pick up on camera and look like we had some life to us, but it wouldn’t look like we had makeup. And that’s the trick I still use.

Let’s talk “Shadowhunter”—give me a little bit of background, and what we can expect.
It’s based on the “The Mortal Instruments” series by Cassandra Clare. And the basis for that world is every mythical creature, every legend, every story, every myth that you’ve heard is true. Vampires, werewolves, demons, fairies, angels, warlocks, they’re all real. And they all exist in our world, [but] humans can’t see them. They call us Mundanes. And shadowhunters are a race of half-humans, half-angels and their task is to fight demons and protect humans from this crazy world that exists around them.

Clary Fray, the character that I play, is this normal 18-year old girl growing up in Brooklyn. She’s an art student living with her best friend and her mom and suddenly on her 18th birthday, weird things start to happen. She meets a mysterious stranger and suddenly her world changes. She learns she’s a shadowhunter and her mother has hidden this from her. We’ve shot six episodes so far, it’s been a crazy ride. But it’s such a fun world to live in because anything’s possible. It’s a very dark, very edgy, very sexy, very violent show and it kind of opens the door to [an] older audience in a very interesting and cool way.

You’re also starring in the upcoming “Maze Runner” film, “Scorch Trials.”
So, the first film, it’s a group of all guys and one girl that are stuck in this maze. And all these things start happening and they have to find their way out of the maze. At the end of the film, they get out and you think they’re safe. Well, in the second film, “Scorch Trials,” you find out that the maze was only the first phase.

How many fight scenes are you physically doing?
The majority. There’s a few things for insurance purposes that they won’t let me do. I have an amazing stunt double. I’ve actually learned a lot from her as far as fighting goes, but they do let me do the majority of my stuff.

Alec vs. Clary… Who do you think will win? ➰ @matthewdaddario @shadowhunterstv @abcfamily #regram @lucescu

What do you do to get in shape to do stunts?
We have a personal trainer who works with us on the weekends and during the week when we have time off. It’s funny because we walk by the craft table and there’s all these sweets and candy and good food and we all like smack each other’s hands and go for the fruit and veggies instead.

Your Instagram Bio says you’re a baker. What’s your go-to recipe?
There’s a few. My grandmother taught me to bake my great-grandmother’s recipes. One of my favorites [is] “Death By Chocolate Cake.” It’s a super dense chocolate sheet cake with a chocolate fudge icing, and I mean this icing is fudge. I’ve literally just made the icing and refrigerated it and it becomes fudge.

You actually also write a bit online too. Is that a separate interest of yours?
I’ve always loved writing and [young women’s website] HelloGiggles approached me and said “Hey, do you want to guest blog for us?” and I thought it was a really interesting opportunity to talk about things that nobody really likes to talk about. And talk about them in a way that’s real and candid and very relatable. Because a lot of things are either geared younger or older and there’s nothing really in between for girls aged 17 to 22. It’s kind of been a freeing experience and I’ve learned a lot about myself and learned a lot about my own opinions in writing those [posts].

You were talking recently about using makeup just to enhance, instead of going too crazy with it. Why do you think that’s an important lesson for girls to learn?
If you love makeup and you love how makeup looks on you, by all means wear it. Pull a red lip, do a cat-eye, whatever you want. Make yourself feel beautiful. But don’t feel like you have to wear makeup to be beautiful. Because makeup, like I said, should be used to enhance, not to hide. All that’s important is feeling comfortable in your own skin.

What do you typically reach for to enhance your own features?
I’m addicted to mascara. I adore mascara. I’ve learned to use mascara to coax my lashes and guide them the way I want them. Blush is a mystery to me, lips are a world of wonder that I have yet to explore, but I would love to learn more … When I go into Sephora I have to physically restrain myself. I have to have a list and a game plan, go in, and get out and not get distracted otherwise I’ll spend five hours in there and buy [the whole] store.