With a beauty budget of $37,728 a year, according to Yahoo, Kate Middleton‘s cosmetics arsenal is likely filled with the highest-end products to keep her photograph-ready at all times. But did you ever notice that despite her ever-flouncy hair and perpetually glowing skin, the 35-year-old Duchess consistently avoids wearing colored nail polish?

According to sources for OK! magazine, royal family members are prohibited from wearing non-natural-looking nail polish, per the official royal family dress code—which might be the reason Middleton and her grandmother-in-law, Queen Elizabeth, are always photographed sporting the same $9 Essie nude nail polishes. (According to Refinery29, The Queen’s go-to shade is Ballet Slippers, while Middleton sticks with the slightly lighter, Allure.) 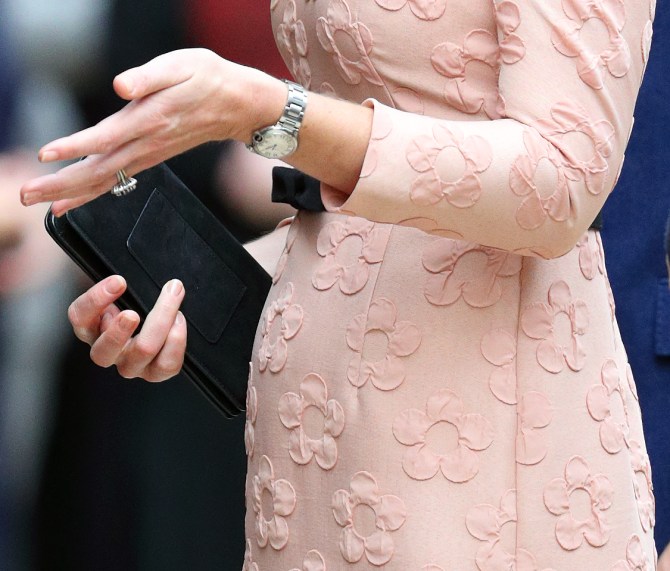 As you might expect, nude nails isn’t the only grooming rule the royal family has to abide to. According to a report by The Sun, there’s a royal reason behind many of the family’s outfit choices—from Prince George‘s preference for shorts (per tradition, shorts are supposedly viewed in a higher class than “suburban” trousers, which we can’t help but giggle a little at) to The Queen’s fondness for long gloves. (She shakes a lot of hands, so it protects her from germs—fair enough.)

Prince Harry’s girlfriend, Meghan Markle, might also be prepping for the royal family dress code. In September, Markle was photographed with her beau at a sporting event, and though the actress took a lot of heat for wearing ripped jeans, she also sported nails with a nude sheen. So, either Markle’s taking beauty tips from her boyfriend’s family members, or her nails are subtle hint to her imminent inauguration into the royal family. Only time will tell.