You might think the curtain bang resurgence came from TikTok, as many on the app swear other creators inspired them (and they probably did!) but we really think the throwback trend came from The Flight Attendant. Kaley Cuoco’s hair was just as much the talk of the show as who killed Alex. The HBO Max show did an incredible job of giving Cuoco’s character perfect curtain bangs at the beginning of the show and a more grown-out messy style as her life devolves into chaos.

Post season one, Cuoco let her hair grow out a bit as she gave the bangs a rest. That’s probably because they screamed Cassie Bowden (Cuoco’s character). But a new role has her making a big chop—again. Cuoco was seen on the set of Meet Cute. The rom-com stars Cuoco and Pete Davidson so we know it’s going to be good. According to Deadline, the movie is “built around the question: What would you do if you could travel to your loved ones’ past, heal their traumas, fix their problems and change them into the perfect partner?” 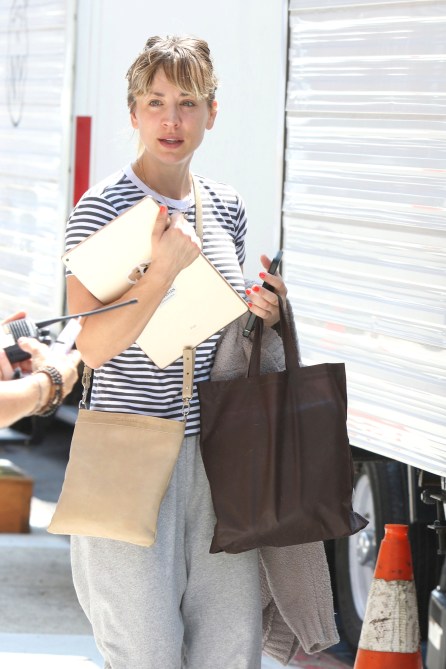 The BTS images from the set in NYC show Cuoco with cute blunt bangs, a far departure (see what I did there?) from her glam Flight Attendant curtain bangs. In some photos, she’s seen looking a lot like Cassie’s hot mess journey though, with unkempt hair during what looks like a car accident. Eek. Otherwise, the bangs look great on her.

They’re long enough to pull back with a cute clip when you’re not feeling them anymore, and short enough to be a look—even in a ponytail. We can’t wait to see what other ways Cuoco plays with the fringe throughout the movie, of which doesn’t have a release date just yet.