I have an important question: since when is Kanye a makeup artist? I must have missed the memo but according to his girlfriend, Julia Fox, he’s her “fave makeup artist.” Fox’s makeup got progressively more dramatic at Paris Fashion Week and it had fans wondering who was behind the dark, heavy cat-eyes. It’s a big departure from her usual looks — well, before she met Kanye. Fox shared a snap of the rapper doing her makeup, so we know he at least had a hand in doing a look or two. But he’s not the only one.

While Kanye might have been playing around with his girlfriend’s heavy look, makeup artist Daniel Kolaric is behind the eye-catching look — at least most of the time. He used all Pat McGrath Labs makeup and the brand revealed exactly what he used in case you want to recreate the look — or a more wearable version of the look! — at home. 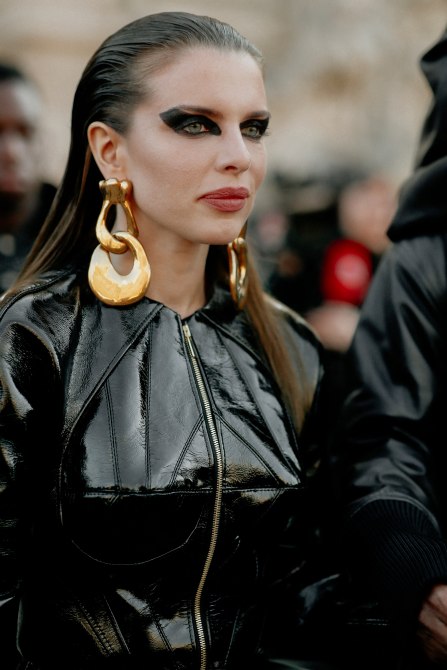 For the Schiaparelli Haute Couture FW22 show in Paris, Kolaric used Pat McGrath Labs Sublime Perfection complexion products, including Foundation ($68 at Sephora) and Concealer ($32 at Sephora) to even Fox’s skintone. He contoured her face with Mothership I: Subliminal Palette in shade Ultimate Taupe ($125 at Pat McGrath Labs) and highlighted with Skin Fetish Highlighter & Balm Duo in Nude ($48 at Sephora).

Now, let’s get to those eyes! He used the same Mothership I: Subliminal Palette but in shade Xtreme Black, as well as PERMA PRECISION Liquid Eyeliner ($32 at Sephora) and FetishEyes Lengthening Mascara ($30 at Sephora). He also used a top secret product on the eyes that the brand will reveal soon. What could it be?!

Kolaric finished the look by lining Fox’s lips with Permagel Ultra Lip Pencil in Bare Rose ($28 at Sephora) and applying MatteTrance Lipstick in Beautiful Stranger ($38 at Sephora). The result? An edgy look that drew all the attention which, we think, is the point.