What do you know about starting a business? That was the question posed to Jessica Alba as she tirelessly pitched the idea for what’s now a billion-dollar empire. “I had a lot of people telling me for like three years that I was cuckoo bananas,” said the 37-year-old actress while discussing her entrepreneurial journey at the BlogHer18 Creator’s Summit in New York on Thursday, Aug 9.

It’s been over 11 years since Alba launched Honest Beauty, yet her hunger for turning passion and purpose into profit remains. As most of us know, Alba didn’t grow up dreaming of selling personal care products. Instead, we watched her climb the Hollywood ladder and make a name for herself in a slew of films (Sin City, Honey) and the TV show, Dark Angel.

But after suffering an allergic reaction from laundry detergent during her first pregnancy, the beauty boss quickly realized the only way to get what she wanted—safe yet stylish products—was to create them herself. Reflecting on her quest to fulfill the basic needs of her family without jeopardizing their health, Alba says that most of what she discovered in “alternative” stores was crazy-expensive, hard to sort through and fell into three color categories: cream, beige or hemp.

MORE: How Gabrielle Union Reacted to a Headline Calling Her ‘Old & Ugly’

Worse, the ingredients in the products Alba saw were dangerous compared to what was used by brands sold outside the U.S. For instance, around the time she started to develop Honest Beauty, “there were about 11 chemicals that were banned in personal care in the United States, while there were over 1,100 banned in Europe.”

So she did something about it. And contrary to what the uninformed might imagine, those beginnings were very humble, to say the least. Writing fancy business plans and crunching numbers were never Alba’s forte, so instead, she started the only way she knew how: by getting it all down on paper. What started as a simple desire in her head turned into countless inspiration collages (think Pinterest, but IRL) piled into binders upon binders. 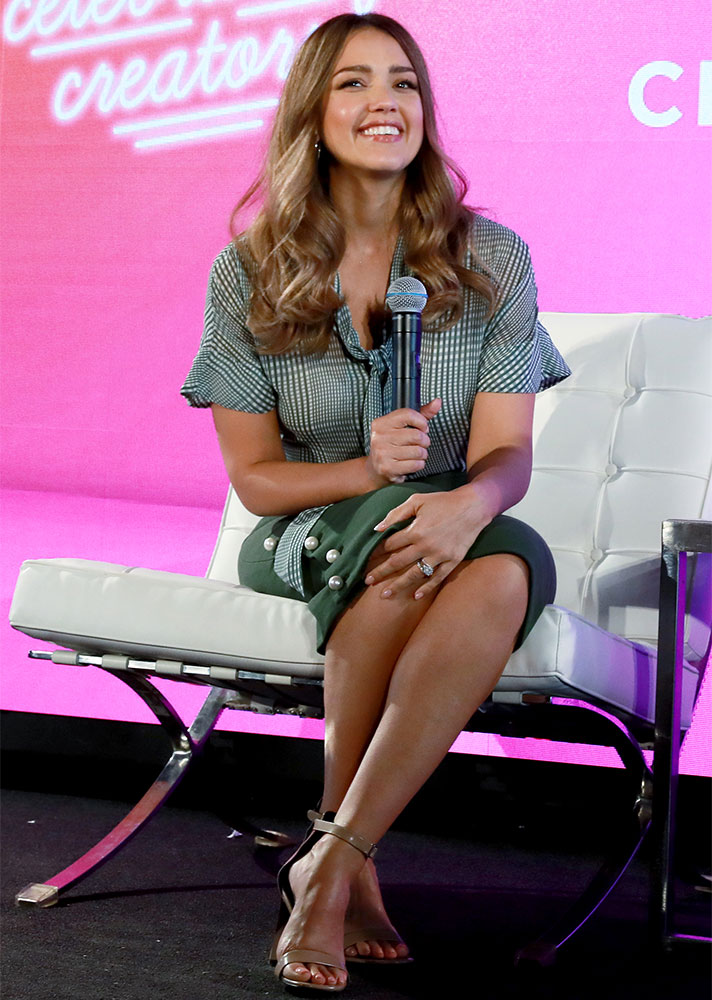 From there, and with the encouragement of hubby, 39-year-old film producer Cash Warren, Alba researched to find a partner who would be able to take her ideas and turn them into a business plan worthy of execution, and also help fill any gaps in her own experience and skill-set. Alba then took her mission a step further by expanding into policy and making regular trips to Capitol Hill, where she lobbies for chemical reform.

While we could wax poetic about all that Honest Beauty has accomplished in store aisles, what Alba is proudest of is creating a community that values transparency, as well as the well-being of women. For example, one of the standout benefits of working at Honest Beauty is a generous maternity leave that affords women 16 weeks of paid time off and men eight.

“And as they ease back into work, maybe it doesn’t start full time. Maybe it’s three days a week until they get their child care together or they feel more comfortable. We work with them on that,” said Alba. “I also built a really beautiful nursing space in our office with pumps and refrigerators and couches. So they can do it all with dignity. [Breastfeeding] is something that should be celebrated, not shameful.”

She went on to talk about her own experience transitioning into motherhood. “I felt so alone when I was pregnant with my first daughter. I was 27, it wasn’t planned and it happened,” she said. “It was the best thing that happened, but I was very overwhelmed. I feel that having a community, especially around that time in your life, is important.”

Above all, running a business from the ground up has taught Alba how important it is not only to do the work, but do it in a way that inspires others to take that first step—however big or small it may be.

“I didn’t realize until about three years ago how important it is for women to see someone like me. My parents were teenagers when they got pregnant. They had three jobs each my whole life,” said Alba. “But I had the capacity to dream and think that I could eventually be a leading lady, and that people like me would want to be represented on the big screen. Listen, I didn’t have agencies lining up to work with me—I had everyone telling me no way. I just pushed through and I made it happen. And I think that representation now as a business leader is just as important.”

Well, if that’s not damn inspiring, we don’t know what is. Alba’s living proof that no matter what your goal is, remember four important things: remain patient, stay humble, know what you’re good at and what you’re bad at, too. It’ll make or break your next big idea.