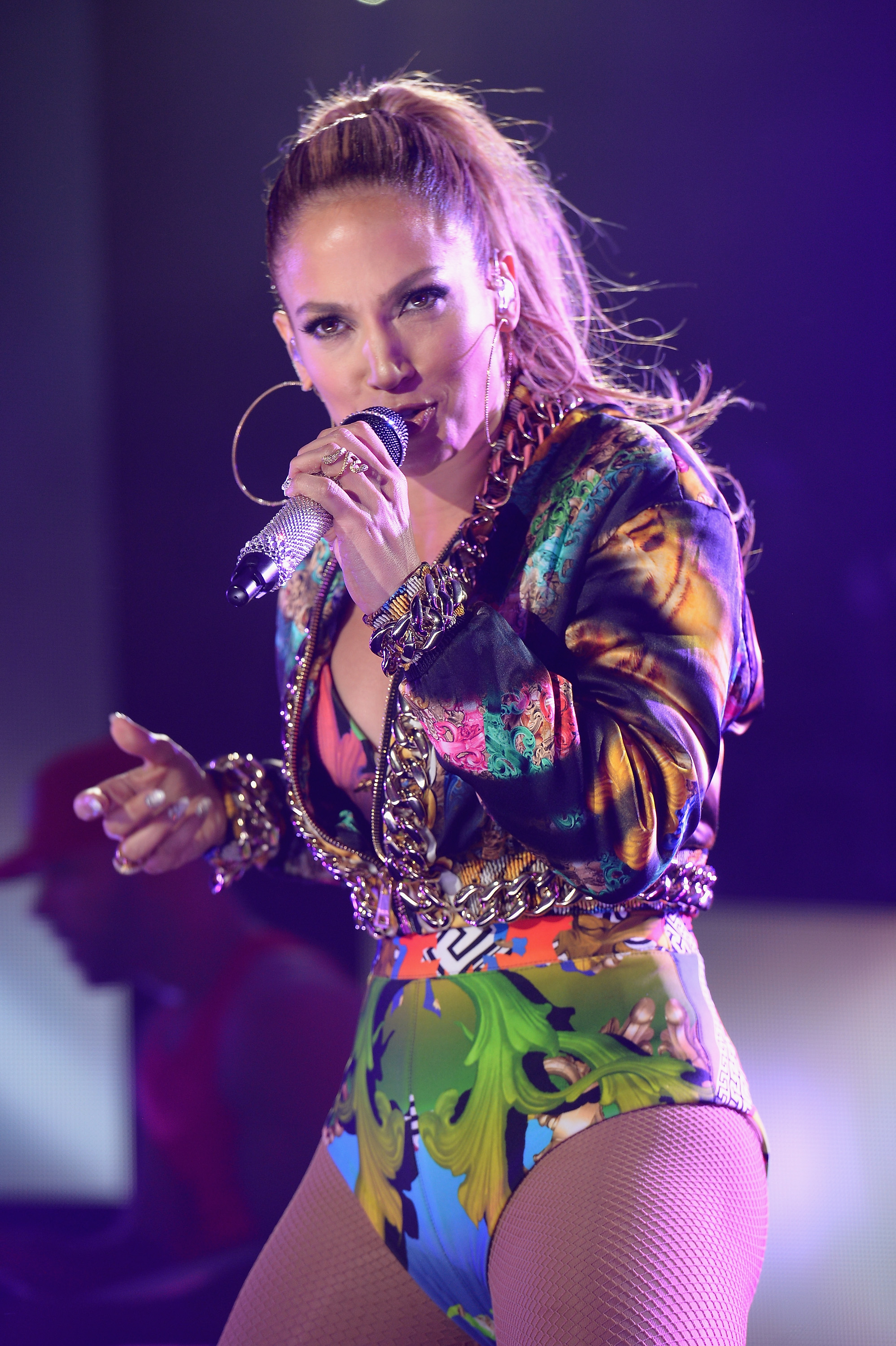 Jennifer Lopez may have come from humble beginnings in the Bronx, but she’s certainly come a long way and she isn’t stopping any time soon. Besides being a fashion designer, a judge on “American Idol,” and an actress with three movies set to come out in 2015, she’s topping charts everywhere with her newest album. The record, “A.K.A.,” was released earlier this month, and features her singles “First Love” and “I Luh Ya Papi.”

This past weekend, we stopped by the iHeartRadio Ultimate Pool Party with Caress Body Wash, where J.Lo closed out a star-studded concert with Iggy Azalea, Ariana Grande, Neon Trees, and more. Lopez gave an energetic show, and at one point during the performance, she did a knee-drop dance move that left her with a huge gash in her leg that didn’t even slow her down (she later Instagrammed the injury with the hashtags #AnotherDayAtTheOffice and #TheresNoCryingInBaseball), proving she’s totally committed to putting on the best performance no matter what.

After the show, we got to catch up with J.Lo and talk about her album, the possibility of a makeup line, and what she thinks about Selena Gomez. Read on below!

On whether she’ll do a makeup line:
Jennifer Lopez: “It’s been talked about a lot, doing a skin care and makeup line, and maybe. You know, I’m always looking for great opportunities to help make women’s lives better, and where I can share my secrets of the things that I’ve learned over the years. I always like when someone gives me a good inside tip, so I’d love to share that with other women.”

On what makes her new album so different:
“I think I’ve just grown up. My first eight or nine albums were just about love in a certain way. Kind of like, ‘I’m in love! I want to be in love! Where’s true love?’ and all that stuff. All of a sudden, because of the things I’ve been through in the past, and then my last album in 2010 was called ‘Love?’ I was questioning love, and I think it’s because of the birth of my children that I really started seeing love in a different way. I had to start looking at myself, as well, and what I wanted to teach them, and I think I’ve just gotten stronger. That’s reflected on this album in so many different ways, musically, lyrically, and emotionally.”

On being a curvy woman in the entertainment industry:
“When I first started out, it was a big deal and I had a manager who told me, ‘You have to lose weight! You’re too big! Your butt’s too big!’ and so it’s funny now that I have a song called ‘Booty,’ and that it’s so celebrated now the world over. I think it’s a big deal for women. You should be proud of who you are and not conform to what everybody else thinks is perfect. There is no perfect. None of us are perfect, we’re all beautiful.” For more on this, head over to Rhapsodani.com!

On the movie of her life:
“It’s funny because they asked me, ‘Who would you want to play you in your movie?’ and I didn’t know, I really didn’t. So they were like, ‘What about Selena Gomez?’ and I was like, ‘She’s cute. Yeah, whatever.’ But there’s no movie. There’s no story of my life happening yet. I’m just not even half way done.”