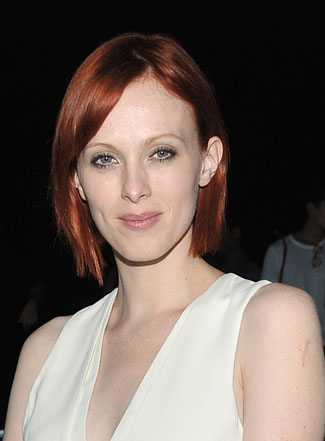 If three’s a trend, this must be an avalanche. Everyone in the fashion crowd seems to be shearing their long hair into chin-length crops this season, including Karen Elson, Margherita Missoni and designer Olivier Theyskens, who sent a pack of bewigged doppelgänger models down the Theyskens’ Theory runway this week.  — via Vogue.com

We know rainbow hues are huge on the runway, but is a drastic color change in the cards for Hailee Steinfeld, who was spotted at pink-haired designer Chris Benz‘s spring presentation? “As much as I want to, I don’t know that I could pull that off,” the 15-year-old actress said. “But if I could it would totally be that bubblegum pink.” — via Styleite

Think the clothes were impressive? The 30 sets of woven plaid faux nails worn at Rodarte‘s spring show took CND manicurist Michelle Huynh and her team over 200 hours to create. — via The Cut