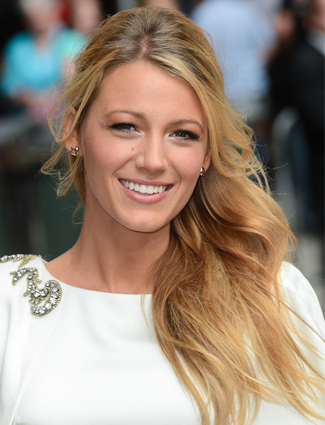 Talia Castellano, the 13-year-old battling cancer whose inspirational makeup tutorials have made her a worldwide YouTube star, was just named an honorary CoverGirl. She appeared on the Ellen DeGeneres show on Thursday to receive the honor as well as a makeup table and $20,000. —via People Style Watch

In her cover story for Allure, Blake Lively reveals her fitness routine, or lack thereof. “I wish I could lie and say that I do something, but…I obviously have plenty of imperfections on my body, but I’d rather have a little bit of cellulite and go do a food trip and try every ice cream place in the South.” —via Allure.com

We’re fascinated by this interview with Louie Zakarian from Saturday Night Live, who transforms the players into iconic American figures on a weekly basis. “I build all the pieces, make all the molds, start running all the silicone appliances, so it takes two days to fabricate everything and that’s only one character…” How does he do it? —via Fashion Etc.

A Japanese fashion designer with the world’s tallest Mohawk—3 feet, 8.6 inches, to be exact—visited New York City yesterday to promote the newest version of the Guinness Book of World Records. —via New York Post

Would you glue your toe nails back on if they broke off? Heidi Klum confessed this to Katie Couric on her new show. What women do for a perfect pedi. —via Hollywood Life