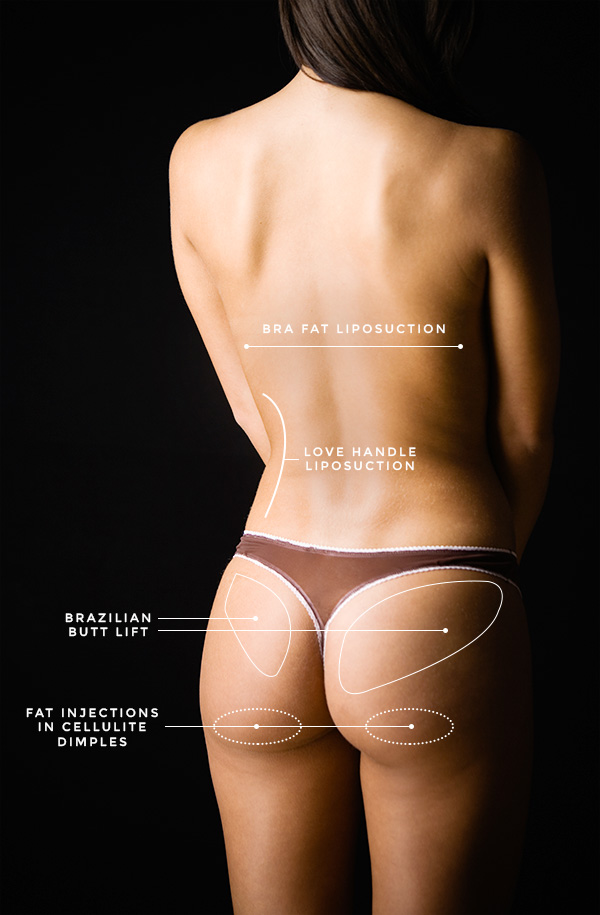 For most of my life, I’ve never really given much thought to my butt. My weight, yes. The bump on my nose that’s pretty much haunted me my whole life, sure. But my butt? Not so much. I’m well aware that other people are forced to look at it, but it’s hard to be bothered by something that I have to stand in front of a mirror at an awkward angle to appreciate.

But, like most people, I haven’t been immune to the recent butt fever that’s sweeping Hollywood and social media. It’s hard to ignore the fact that we live in time when Kim Kardashian’s ass is essentially a national treasure, and someone like Jen Selter is able to become an Insta-celebrity solely because of the shape of her backside.

MORE: Men Are Obsessed With My Butt: One Woman’s Story

This got me wondering about what could be done to my own not-too-big but not-too-perky pancake-shaped butt if I had a little professional help, so I booked a blind consultation with New York City-based plastic surgeon Dr. Matthew Schulman, who happens to be known as a “butt lift genius” (at least according to cosmetic procedure message boards.)

I filled out some basic paperwork in his Park Avenue office, and stepped into a white cotton spa robe to await the fate of my ass. I’ve heard the horror stories of plastic surgeons shaming women with a million unsolicited suggestions about things they should do to fix themselves with plastic surgery’s help, and candidly, I was prepared to hear that and then some.

When Dr. Schulman arrived in the examining room, he first asked me the end result I’d like to achieve. “I’ve always hated my pancake ass,” I told him. He nodded, understanding my request. I undid my robe (I was wearing my bra and an unfortunate pair of beige cotton granny panties, FYI) and Dr. Schulman pinched my stomach and love handles to see how much fat he had to work with.

“Relax,” he told me (translation: Stop sucking in). He examined my butt for what seemed like a solid minute, looking at its shape like a sculptor about to go to work on a hunk of clay.

I then took my place in front of a full-length mirror, with Dr. Schulman behind me, and he pointed out three areas of my body he could take fat from—my stomach, sides, and my mid-back—and insert it into my behind, otherwise known as a Brazilian Butt Lift.

He didn’t mark my body with a marker like you often see surgeons do in movies, but the assessment of my body’s problems areas left me acutely aware of all of the spots that could be fine-tuned if I really wanted them to be, and also left me wondering where I would ultimately draw the line if I started down the surgery path.

The result, he said, wouldn’t be crazy, but would definitely give me a little more volume back there, and help me fill out a pair of pants better. The surgery would also help me achieve that “slope” look that many women are after between the back and the butt.

Then came time to talk about side effects. The doctor told me that at first, after the surgery, most people think their butt is too big. “The swelling has to go down” he said. I’d have to be out of work for about two weeks, though after a week he did tell me I’d start to feel better.

Recovery also includes eight weeks of wearing a compression garment, and during that time I’d have to learn to sit slightly differently—on the edge of my seat and with good posture in order to help the fat “stick.”

“You’ll figure it out,” he said, though it was hard to imagine two months of sitting at my computer in an entirely new position.

After the consult, his assistant took me through a whole roster of before and after photos of people who had done the surgery. Some go for volume she told me, while others want to fix cellulite dimples with fat injections. People also apparently bring in butt inspiration photos and the doctor pins them to the wall of the operating room while in surgery.

Looking at the doctor’s work, it was evident that there isn’t one type of woman getting this surgery—some were tall, others petite, some curvy, others slender, and the ethnicities varied tremendously. Bottom line: Butt augmentations have mainstream appeal.

You’re probably wondering what my fabulous new booty will cost, right? All in, the procedure would run me $13,500, which includes the liposuction. If that sounds high, keep in mind this is a New York City doctor, and this surgery is cheaper in other parts of the country, where the average is around $6,500.

Judging by recent stats, it’s clear I’m not alone in contemplating a butt augmentation: Around 10,000 procedures were performed in 2013—a 16 percent increase from 2012—and all evidence suggests that that number has only gone up.

That women are now actively seeking to make their butts bigger is a relatively new phenomenon. Butt augmentations first began appearing in medical journals around 1969 (almost 80 years after breast implants did). At first, doctors were using synthetic implants that were pretty similar to breast implants to enhance the size of people’s butts, but there were complications.

Patients complained that they could actually move their implants around in their own bodies (yikes is right). By the 2000s, these procedures had evolved with doctors focusing on subfascial implants—implants closer to the surface—which were more stable than earlier variations.

Now, for the most part, implants are out of vogue—most people can’t tolerate them because it’s a part of the body that is too important for movement and weight distribution—and the Brazilian Butt Lift, which involves taking fat from unwanted parts of your body and implanting it into your backside is the plastic surgery du jour. Many compare the procedure to filling up a balloon (your butt) with all-natural fat.

MORE: The 25 Best Songs About Butts: A Ranked Guide

For plastic surgeons, the posterior business is booming. New York City-based Dr. Douglas Taranow, also known for being a butt augmentation go-to, shared that these surgeries are his second most-popular procedure, right behind liposuctions (interestingly, it wasn’t long ago that breast augmentations held that second spot.) Dr. Taranow now performs about two to three butt enhancements a week, sometimes more during tax-refund season.

As for who average women are looking to for inspiration, it’s the usual suspects, but we’re also apparently pretty taken with social media stars. “Yes it’s J.Lo and the Kardashians, but it’s also a lot of unknowns on Instagram with a lot of followers who take selfies [and] have super tiny waists and big butts,” Taranow said.

A few points I took away from my consultation: A Brazilian Butt Lift does seem like a plastic surgery procedure that gives you bang for your buck, but it definitely involves a time commitment: Two weeks out of work, and eight weeks of recovery. That said, I was pleasantly surprised to discover that the surgery has evolved to a point where doctors are able to offer a variety of results suited to different body shapes—it’s not about producing a bunch of women with the same butt, and that’s a good thing.

Still, I think I’ll stick with my au natural booty for now, but I definitely gained an appreciation for why women want to put themselves through this. And from now on, whenever I manage to catch a glimpse of my posterior, I’ll probably be thinking of the butt I could have had.