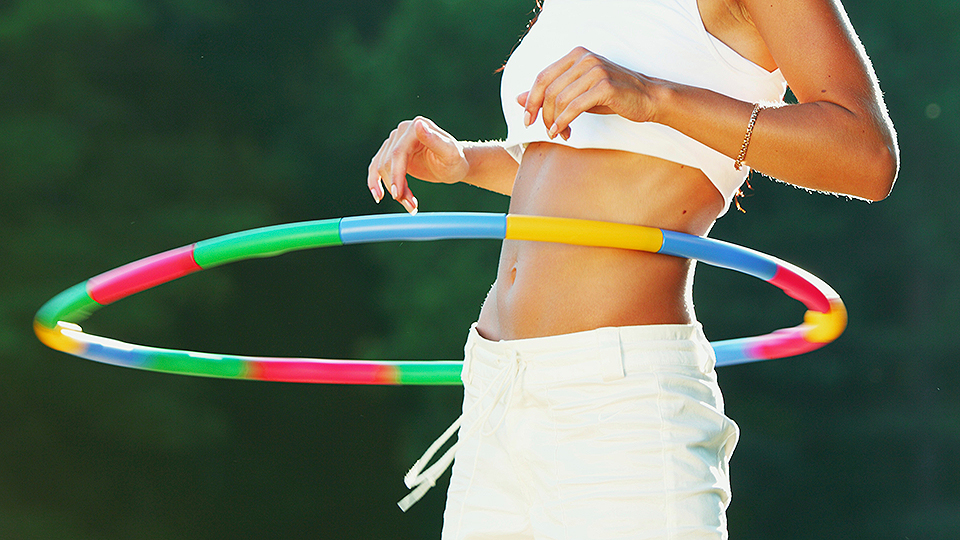 As you may have already heard, working out is not my thing. I struggle with every aspect of it, from finding the motivation to exercise to actually getting to the gym or the Spin class or whatever—which, come to think of it, is pretty much all there is to it. So simple in theory, so much more complicated in practice.

The (somewhat) obvious solution, one might say, would be to try working out at home. People do it all the time—they swear by Kayla Itsines’s routine, or some Pilates videos they can do on a yoga mat on their living room floor. I see commercials for Daily Burn every time I watch Hulu, which is often. But for one reason or another this has never appealed to me any more than the gym does. It’s all the same, just with a change of scenery.

However, with that said, I have changed my tune ever so slightly. Because, as of, like, two weeks ago, I’m kind of into Hula-Hooping. I didn’t even mean for it to happen!

What did happen, regardless of whether or not I meant for it to, is this: A far more fitness-minded coworker donated an Empower Cardio Core & More Customizable Weighted Hoop she’d received to my cause. It sat untouched next to my desk for a few days before I remembered that it was there and carted it home via subway. Upon arrival, I arranged for my boyfriend to assemble the hoop for me, on the grounds that I was “too beleaguered,” which he did. Then, on the wings of a second wind, I got to hooping. And I haven’t stopped since.

JK, of course I have, because I only do it for probably 10 minutes a day, in front of the TV, and only while I’m home alone because I’m too embarrassed to be seen. Also, it’s hard: An out-of-shape person like myself cannot simply pick up a Hula-Hoop and start going at it for two hours. I’m not some kind of savant, you know. But even so, I’m convinced that Hula-Hooping for exercise is the way of the future. It’s low (or no) impact, it’s fun, it helps improve your balance, it burns calories, you can do it while watching TV, it strengthens your core, you can do it while watching TV, and so on and so forth—and you will, in fact, actually sweat.

The kind of hilarious, kind of horrifying downside is that the hoop gave me bruises at first on my stomach and hips, which according to Internet reviews is very common. But I didn’t let it deter me, and within a few days of regular hoopin’ the bruising situation subsided.

Should you ditch your regular fitness routine in favor of all hooping, all the time? Eh, probably not. But for People Like Me, who really have a hard time putting forth the effort to do any kind of exercise, it’s a great, (relatively) painless way to burn some calories and remind yourself that you can, indeed, move your body if only you try just a little. For me, that’s a big coup: Hula-Hooping may not be the most involved way to work out, but it’s encouraging to remember that I’m not a lost cause just because I’ve dry-heaved in every SoulCycle class I’ve ever spent $35 on. Highly recommended!