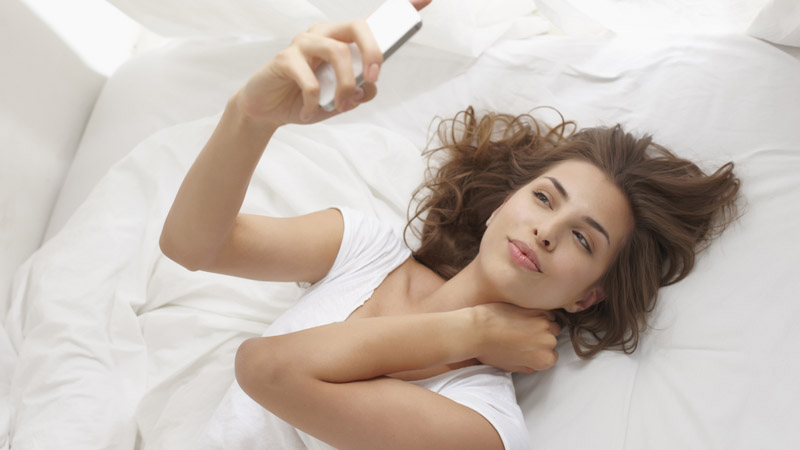 If you’ve engaged in some naughty texting, you’re not alone. Earlier this month, the sex toy company Adam and Eve surveyed more than 1,000 adults and found that 32 percent of men and 38 percent of women sext. That’s a lot of X-rated content flying around the digital world!

Whether you want to experiment more with sexting or you’re a seasoned vet who wants to step up her game, we talked to several sexperts to get their tips and tricks for giving—and getting—seriously hot sext.

1. Start Out Slow
“Building sexual tension can make the interaction and anticipation even hotter,” says sex and relationship expert Rachel Needle, Psy.D. She offers these opening lines as an example:

2. Be a Little Bit of a Tease
“You want them to have something to look forward to, so try to create some ambiguity and mystery,” says Needle. “They should have to use their imagination to fill in some blanks.” Some examples:

3. Then, Fire Up His Lust
Once you’ve got him worked up, Needle gives these examples for how you can really heat things up:

4. Jog His Memory
“Tell him what got you totally turned on the last time you were together,” suggests Amy Levine, sex coach and founder of Ignite Your Pleasure. “Maybe it was the way he sensuously ran his hands through your hair. Or the way he swirled his tongue on your clitoris when he went down on you…”

5. Leave Him Hanging—Just a Little
“Messages that beg to be responded to will keep the game escalating,” says Michele Lisenbury Christensen, the founder of HotLoveRevolution.com. Like this:

6. Give Plenty of Feedback
“Like what your partner is saying? Something stop you in your tracks? Tell them!” says Andy Duran of the Good Vibrations education department. “Your partner on the other end can’t see you and wants to know you’re into what they’re saying.” Positive reinforcement can be just the encouragement your sexting partner needs to keep it coming. (Pun intended!)

7. Do a Sext Strip Tease
Throughout the day, text your partner what you want to do to him—or, what you want him to do to you later that night, suggests Levine. “At times, include a suggestive photo. The anticipation of getting it on can be as exciting as doing the deed.”

8. Remember, a Picture’s Worth a Thousand Words
“Though some might go for full-on crotch shots when it comes to sexting pics, never underestimate the seductive power of a suggestive photo,” says Duran. “A shot of the underwear you’re planning on wearing for your date or of you wrapped in a towel after the shower can be enough to tempt and tease your mate.”

When it comes to “don’t”s, there really aren’t that many, but these two are pretty big ones:

9. Don’t Send Pictures That Include Your Face
Remember, you can send really hot photos that don’t include any identifying characteristics, says Levine. You don’t want to be one of those scary stories about leaked photos.

10. Don’t Sext Too Soon
“If you just met someone, you don’t want to turn it sexual too soon because then it becomes all about sex,” says Needle. “Give them something to look forward to—tame it down a bit if your relationship is new. You can talk naughty and flirty, but don’t get too dirty too soon.”

The 9 Most Ridiculous Lies We’ve Ever Told While Sexting

You Have To See This Sexting-Ad

The Best Response To An Un-Solicited Sext