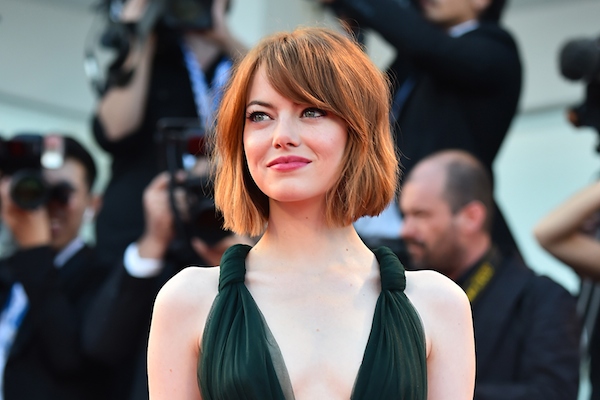 Bobs continue to make their debut on multiple celebrities from Jourdan Dunn’s blunt bob at the VMA’s to Lily Collins’ July cut. While it may seem like a straightforward short haircut, it’s definitely not. There are multiple ways to cut a bob, from layered to choppy to varying lengths. If these celebrity cuts have inspired you and your ready to make a chop, it’s key to choosing the best one according to your features. We talked to celebrity hairstylist Charles Dujic, who’s worked with stars from Brooklyn Decker to Lily Aldridge, to help find the best bob for you.

A lob works great for girls with rounder faces. Dujic recommends cutting it at least an inch below the chin or longer. To add asymmetry to otherwise soft features, he suggests to try a side-swept face framing cut.

Lobs are one of those cuts that look great styled wavy or straight. If you want waves, Dujic suggests using a 1″ or 1 1/4 curling iron and bend to the mid-lengths. “Leave the ends slightly turned out, but not necessarily curled.” For a straight style, he warns not to use a flatiron, “It should have some fullness to it.”

A chin length is a great length for blunt bobs or oval shaped faces. When styling, Dujic says not to turn out or under when blowing dry. He also suggests applying Living Proof Primer in damp hair for lasting results.

A choppy bob can soften a square-shaped face, especially if you cut some sort of face-framing bang. Dujic recommends accentuating the choppiness by flipping the end randomly inward and outward when blowing out. Or, you can create the same effect using a flat iron after blowing the hair out.

“A blunt bob with bangs on a heart shaped face looks great,” claims Dujic. He explains how it draws attention to the eyes and cheekbones. To emphasize the bluntness of the bob, it should be styled smooth and straight. Dujic recommends using a paddle brush like Mason Pearson Junior to achieve sleekness from roots to end.

MORE: Fall Hairstyles 2014: The Trends You Can Pull Off at Home

An angular face calls for an angular bob. Dujic tells us that it’s all about the geometric lines for angular bobs, particularly an A-lined bob. “Think 1960’s Vidal Sassoon.” To achieve the best style, Dujic preaches these three S’: smooth, straight, and shine. He suggests using a small amount of Bumble and Bumble Invisible oil to boost the shine power on your hair.

A similar type of cut, choppy and layered bobs also work well with square shaped faces. Dujic explains that the layers will soften the squareness. Similar to a choppy bob, when styling a layered bob it’s important to accentuate the present layers. Dujic suggests first blowing out for volume, then after, go in and create texture with a curling iron or wand. When finished, flip your head over and spray in some Oribe Dry texturing spray near the roots of the hair to give hair extra body and fullness.

There was no mention for girls with oval shaped faces above, and that’s because you’re one of the lucky ones who can wear any bob. Dujic informs us that an oval face can carry any and all bob cuts or styles. “Center or side part; wavy or straight; with or without bangs; cheekbone length to lob.” Lucky you!