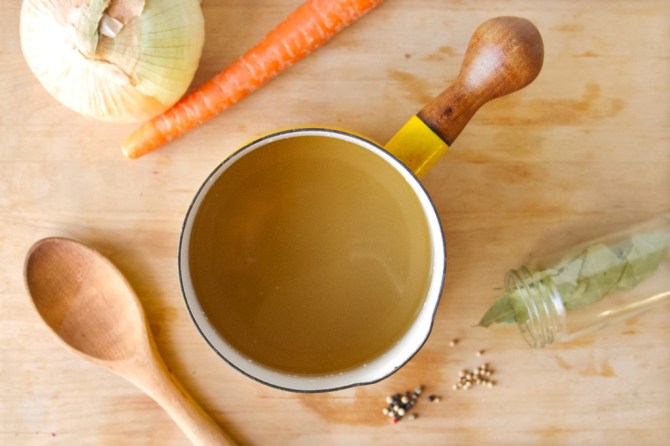 You don’t have to be a huge foodie or health nut to have heard something about bone broth. Right now, everyone from wellness bloggers to mainstream media outlets are predicting this concoction is set to become a major health food of 2015.

Fans of the superfood elixir claim it can fix gut issues, protect your joints, help you sleep, promote immune function, and even fight aging. Plus, it’s super budget-friendly.

While the name “bone broth” doesn’t do much to sell this nutrient-packed food, anyone who enjoys a chicken or beef soup will probably love the flavor. This recipe uses chicken, but beef bones are just as popular.

MORE: 11 Health and Fitness Trends That Will Be Huge in 2015

I’ve made bone broth a couple of times in the past, and to DIY you’ll need to start long before you’re actually hungry (cooking time can be up to 13 hours.) If drinking straight broth doesn’t sound appealing, try using the mixture as the base for other soups instead of store-bought chicken stock.

1. Place chicken parts in a slow cooker or large pot with water and cook on high for three hours. Remove the chicken, pull the meat from the bones, and set aside. Return the bones to the slow cooker.

3. Set the slow cooker to a low setting and cook for 10 hours. If you don’t have that much time spare, turn the heat up high and cook for six hours. You might have to replenish the water if too much evaporates while cooking.

4. Turn off the pot, and strain the broth through a fine-mesh sieve.

5. Serve in portions in the freezer or fridge.

6. Scoop off any solidified fat before serving. You can drink the broth straight and serve with a sprinkle of fresh parsley, or use it to replace stock in soup recipes. Mmmm, tastes just like chicken.

MORE: 13 Healthy Lunch Ideas That Are Realistic for Working People