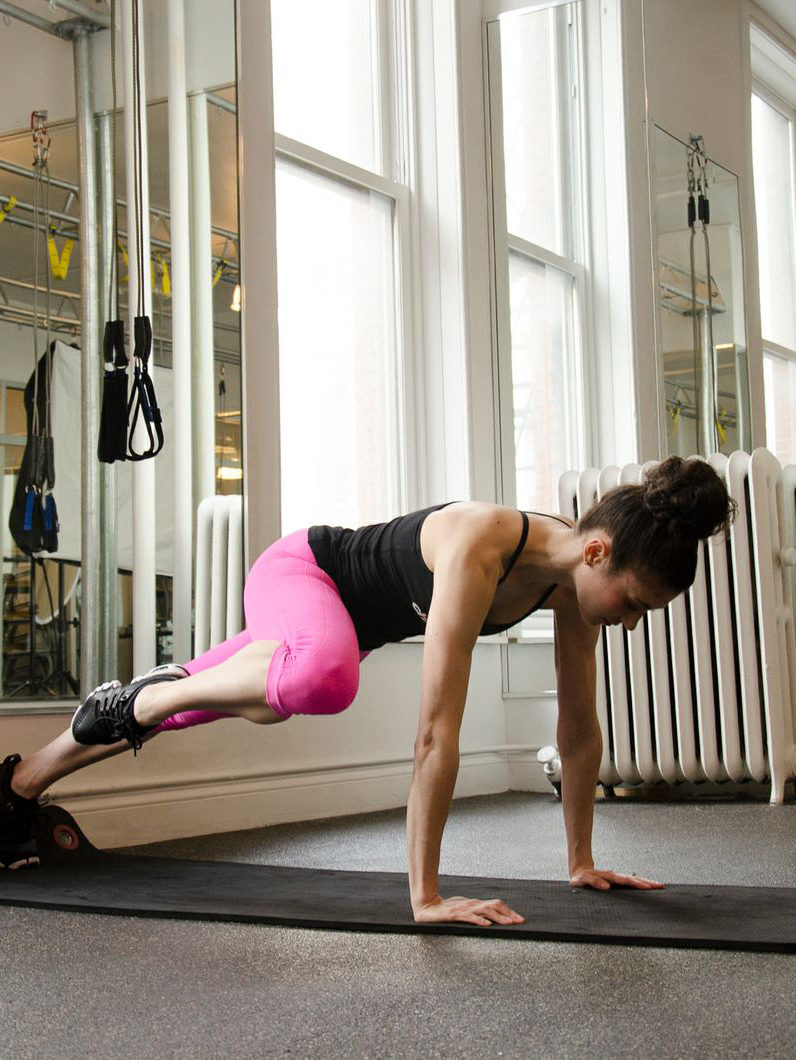 Whether the concentration is focused on getting a six-pack, lean legs, or sculpted biceps, muscle tone is a common goal in the world of fitness. Since we know this takes time and a whole lot of dedication, we’re always on the lookout for exercises we can incorporate into our personal workout schedules that will target, strengthen, and ultimately chisel our stems and core. To get a better understanding of how the act of toning up the bod actually works, we caught up with ChaiseFitness co-founder Rachel Piskin, a former dancer with the New York City ballet who broke down and explained a few methods, moves (using resistance bands and your own body weight), and sculpting tips based on different areas of the body. Take a look below and try it out at home.

Time Frame and Fitness Level
To really buckle down on your goal, make up a workout schedule for yourself so that you know you’re hitting the target areas. While Pisken says that this is relative to your fitness level, she says that focusing on toning three times a week for eight weeks is a nice kick-off start. “You will begin to see and feel new definition, tone, and strength throughout your body.”

Don’t Discount Full-Body
Really, really love those cardio-centric, full-body bootcamp classes? You don’t have to give them up when you’re looking to tone. “I always think that full-body workouts, like vigorous cardio, are an essential part of the toning process. In order to achieve the best results, full-body workouts should be worked into your workout regime along with isolated toning workouts that target a specific zone,” explains Piskin.

Watch Your Diet
Diet is a definite factor in toning the body. Piskin says to make sure you’re staying hydrated (so drink that water!) and maintaining a healthy, nutritious meal plan.

MORE: Fitness Inspo to Kick Your Butt Into Gear

Arms
Making muscles (with definition) on your resolutions list? “To tone you want to choose a workout method that is safe, effective, and that focuses on form and technique. When you perform an exercise properly your muscles will react quicker and the results will be long lasting,” says Piskin who suggests using light weights or resistance bands with longer repetitions for muscle tone.

At the ChaiseFitness Studio that Piskin instructs at, she explains that their classes are often centered around an overhead bungee system that creates resistance needed for lean and defined muscles. “If you can’t make it into the studio grab a resistance band which provides the perfect amount of even resistance to create those well-defined arms. The resistance band helps lengthen the muscle while sculpting it so you will not build bulky muscles, only long, lean sculpted guns.”

Exercises to Try
Bicep Lunge: Stand on the middle of the band with left foot and the right leg back placing ball and toes of foot to floor and your heel lifted parallel back leg. Hold one end of the band in each hand at the side of the body. Go into a deep lunge, keeping elbows glued to the side of the body and curl fists into a bicep curl. Release to starting position. To this move 20 times per side with 2-3 sets with rests in-between.
Piskin notes that this move also tones and strengthens the upper body, core, and glute.

Plank Passe Push-Up: Put your right foot against the wall. Rotate right knee to a passe position (toes to the left knee). Walk hands out into a plank position. Pull right knee up towards shoulder as you push up. Bring toes back to knee and release push-up position. Do this 10 reps per side at two to three sets with rests in-between. Piskin says this specific exercise tones and strengthens not only the upper body but also the core.

To really see results, Piskin says you should try to target this area with strengthening and toning exercises at least three days a week.

Abs:
If you’re looking to give your abs some definition, Piskin suggests picking classes that have a foundation in Pilates or dance or are core-focused.”Balance and coordination require core focused movements, so you are forced to constantly engage your abdominal muscles.”

She also mentions that to really see the results you’re seeking, you should focus on keeping a solid form (that means don’t get sloppy with your moves) even when your muscles are fatigued. The two exercises mentioned above target the core area, too.

Legs:
“The legs are comprised of many different muscle groups, so it is important to make sure that you are doing the exercises that focus on the correct zones to achieve the effect you want. For example, to get long, lean, dancer-like legs it is important to focus on exercises that have eccentric and concentric muscles movements with a lower-body focus,” says Piskin.

In terms of exercise, Piskin points to lower-body exercises and her ChaiseFitness streamable Pilates and Dance-focused exercise videos which target areas like glutes, quads, and the hamstrings. “Instead of squats think lunges into a balance, curtseys with a resistance band and leg extensions on the mat,” she says when explaining the videos.

MORE: How to Get in Shape