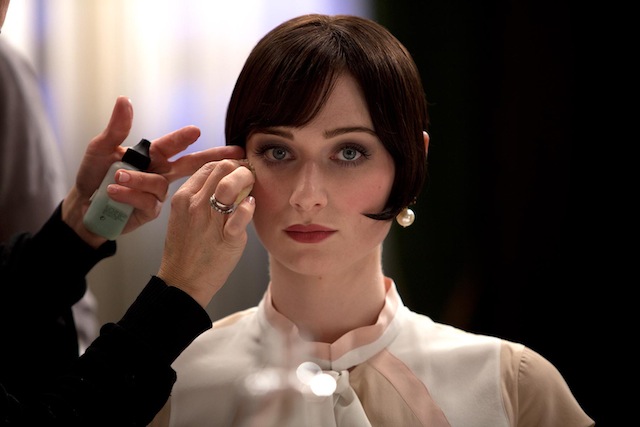 Elizabeth Debicki getting final touches on her makeup on set of “The Great Gatsby.”

With the release of the much-anticipated Baz Luhrmann movie version of “The Great Gatsby” growing near, our minds are constantly being drawn to the retro beauty looks of the Roaring Twenties. From a defined brow with a straighter edge to a perfectly-stained lip and a lived-in, rosy flush to the cheeks, the ladies of the ’20s certainly understood glamour, and the steps to faking it until you make it.

MAC Cosmetics provided makeup support to makeup designer Maurizio Silvi to create the look for the film (which stars the gorgeous Carey Mulligan as Daisy), and we caught up with one of their senior artists, Keri Blair, to walk us through the creations of the retro beauty look, and learned how the movie version of “Gatsby” modernized the ’20s-era makeup. Read on below!

Beauty High: First, can you walk me through how someone would recreate the above makeup look, which was commonly seen in that decade?

Keri Blair: I think that what’s really beautiful about the whole concept of “The Great Gatsby” and what’s amazing for a makeup artist is that it’s all about glamour – so using colors like vanilla to create a halo effect around the brow and keeping a dark stain around the eyelid, it’s kind of sheer but has a great effect to it, you could also use Blacktrack Fluidline at the lash line, creating a line that is not a defined line but will give you depth and dimension and then of course finish with lots of mascara.

The rest of the look is a bright flush for the cheek – use Blushbaby or Desert Rose for a rosy tone, almost like you’ve pinched your cheeks, and the lips are like a pretty, soft peachy rose. Again, a color called Unlimited which is quite nice, like the perfect coral pink. It’s important that there aren’t any hard lines around the mouth to get that defined shape, so use your pencil all over the whole lip. You would also want to make sure your lip is prepped so it’s creamy (with a balm) when you put the pencil on, all over the lip to create that stained look, and then use your lipstick in the same way over the entire mouth for added color, and then make sure you blot to pick up any excess product.

What are some of the key ways that the makeup teams worked to make the ‘20s look more modern in the film?

It has a lot to do with technology and makeup but also the application process, prepping the skin correctly helps, it gives it a more modern feel and modern look, a rounded brow shape, a rouge cheek and lip, but the textures aren’t overly shiny or overly cake-y – they’re very fresh and the skin keeps it modern and keeps us coming back, essentially when you look at “The Great Gatsby” there was a real strive for glamour, and even if you didn’t have money, you still wanted to be glamorous. 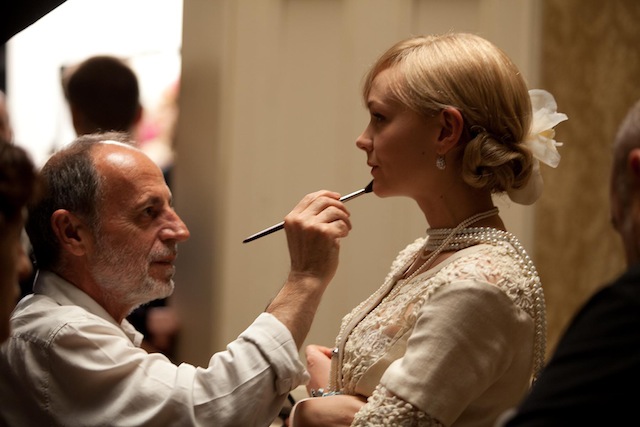 There seems to be a common theme of a very defined upper lip shape – was this true to that decade?

I think what’s interesting about makeup in the ’20s, ’30s, and ’40s was that makeup artists were really creating characters – that bow shape was really prevalent in the ’20s, it was a reflection of what was happening during that time, the art deco nature, and it gives that flapper-esque look, the hair curve close to the face, that sort of innocence that still had something lurking behind it.

The brows also clearly have a defined shape for each character, with a straighter edge  – can you talk about how that was created?

The idea with the brow is that it’s quite thin, it’s very groomed and very rounded, it has a bit of a straighter look with an edge,and  it makes the eyes rounder and bigger and flirty – when you’re applying product to create that shape you would use your pencil to create it into a “bowed line” – it mimics the lip a bit also which is nice.

Lastly, are there any quick tricks that really jump out at you and help to differentiate a ‘20s makeup look?

Again with the ’20s, when you look at the Roaring Twenties as a whole, when you think of the flappers and the deep stained mouth it has a really specific round shape, especially that upper lip and that straight brow – it’s not the cat eye of the fifties – and everything has sort of round edges and sort of a sweet innocence to it, but again everything had sort of an innuendo that was very reminiscent of that decade.

All images courtesy of Warner Bros., photographed by Matt Hart