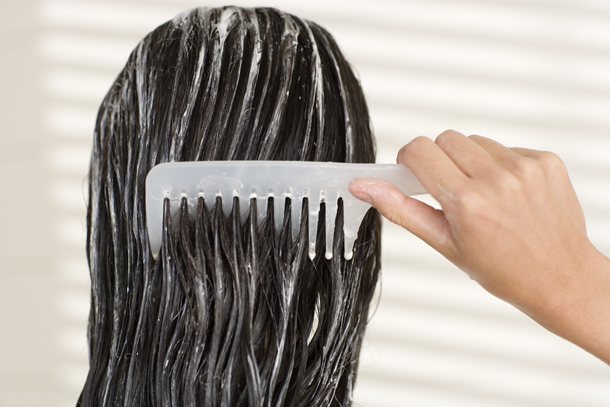 A diligent conditioning routine is a non-negotiable for maintaining healthy, manageable hair—that much we know to be true. But for almost as long as we’ve been obsessing over softness and shine, we’ve been shirking the directions on the packaging that encourage us to let the conditioner linger in our hair for three to five minutes, no more, no less. Instead, we’re wont to leave it in for as long as we like, whether we’re doing so as we scrub and shave in the shower or even deep treating overnight. It’s easy to see why one would think that the longer you condition, the better—but can you have too much of a good thing?

While some conditioners are formulated for extended use (oil-based conditioners are one exception), and some are even meant to be left in overnight, the general consensus is that just a few minutes is plenty of time for conditioner to work its magic. Leaving it in longer has few benefits, as the conditioner has already gotten the job done within those few minutes, and while it doesn’t usually have negative repercussions, certain hair types can indeed suffer from over-conditioning. When left in too long, protein-based conditioners can wreak havoc on damaged hair—because damaged hair is so porous, it’ll suck up all that protein, which will actually incur more breakage as the hair as been overloaded.

Bottom line: conditioner is still a must for keeping hair manageable, but more often than not, there’s no need to leave it in for more than a minute or two. Remember that next time you’re in a rush and wasting time in the shower to give your conditioner a chance to “work.”