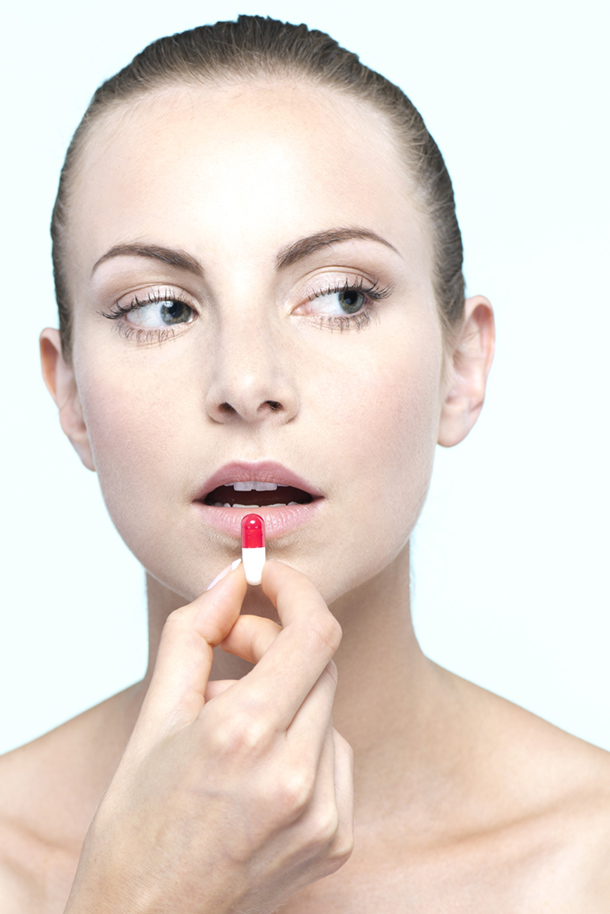 Dealing with acne is tough any way you cut it, but I’ll go out on a potentially controversial limb and say that it may very well be even more difficult when you make it through adolescence unscathed only to develop serious breakouts later in life. You get spoiled, and maybe even a little cocky: When everyone else is suffering from post-pubescent pimples and you still have the unblemished skin of a baby angel, you know just how good you have it.

I was that girl, but in my early twenties, things got kind of real for me. It started innocently enough, in the form of a single inflamed bump on my chin that hurt to the touch. While I attempted to treat it with countless over-the-counter products, they just dried out my skin in that area without affecting the actual zit in any way. It didn’t get smaller, and unlike the usual pimple, it never came to a head, just sort of lived beneath my skin as a painful, red, difficult-to-conceal mound. Charming.

It became all the more concerning when this single alien entity developed siblings. Two more popped up just next to it, which, as someone who both possesses skin and had also never had acne before, was alarming on all counts, which is how I ended up wild-eyed in the dermatologist’s office demanding an explanation. Frustrating as it was, there was no explanation, just a syringe full of cortisone, a topical cream, and an antibiotic prescription.

As both a hypochondriac and a millennial, I was practically born with a computer mouse in my hand, so I got to Googling not only the antibiotics and topical treatment I had been given, but also the type of acne I was suffering. It was most definitely cystic, based on the way it looked, felt, and raised hell for weeks at a time, and based on the part of my face it plagued—my chin, exclusively—it seemed like the cause was hormonal.

Plenty of people suffer hormonal acne around their period, but these popped up at random throughout the month, seemingly without relation to my cycle. I do, however, have a whole host of gynecological issues, including damning cysts (sexy!), so the hormonal connection made perfect sense. But regardless of what was causing the acne, the antibiotics were helping. Don’t tell me—I know how bad oral antibiotics can be for your health overall, but although my skin wasn’t flawless, my cystic blemishes had improved, so I tried not to look a gift horse in the mouth.

I stayed on the antibiotics for longer than I’d like to admit before a new dermatologist offered me another option. At this point, I had gradually started to wean myself off the meds, and things were not looking good. In classic hyperbolic fashion, I would go so far as to suggest that my face was busted. I had tons of tiny red bumps on my cheeks that I’d never had before, as well as a well-stocked inventory of cystic zits scattered across my chin, and without the antibiotics to fend off my acne while potentially destroying my liver, I didn’t know what to do. It wasn’t going away, and it wasn’t getting better. I was desperate.

After arming me with two topical creams (Aczone and Tazorac, for what it’s worth—they’re great!), the derm explained to me that they’d been seeing great success with a new kind of treatment. When I say new, I actually mean that it’s very, very old, but has only recently been used to treat acne. Spironolactone may sound scary by name, but it’s actually fairly innocuous, as far as drugs go. Let’s get scientific: Aldosterone is a hormone that your adrenal glands produce to regulate the salt and water balance in your body. Spironolactone is a diuretic pill that prevents the body from absorbing too much salt due to a condition that causes too much aldosterone in your body. It treats fluid retention in people with serious illnesses, and it most definitely makes you pee. It also works to suppress the very same hormones that—you guessed it—cause hormonal acne in women.

It has relatively few side effects—aside from all of the peeing, which is a happy, belly-flattening byproduct if you tend to hold onto water weight—and while I can’t promise it’ll be a miracle pill for everyone, you can find plenty of anecdotes from women who’ve seen a huge improvement in their acne after they’ve started on the drug. I’m sure you can infer that I started on spironolactone, too. The doctor said it would take anywhere from two to four months to start seeing results, but for me, I noticed my skin improving within a week or two.

I’ve continued with my regular skin care routine, eschewing the recommended CeraVe in favor of my Tata Harper cleanser of choice (come on, I’m a beauty editor, what did you expect?), and in conjunction with the topicals that I often forget to even use, the difference spironolactone has made has been kind of revolutionary for me. Perfect skin in a pill for people who suffer from chronic hormonal acne? It sounds too good to be a reality, but with spironolactone, it may not be so far from the truth.

Read more from Daily Makeover: 12 Scary Facts Your Skin Can Reveal About Your Health