One might say that pulling off a plastic film from a new phone is the most satisfying thing ever. Others might say it’s dipping into a completely untouched jar of peanut butter. But if you’re a skincare junkie like us, there’s no greater feeling than taking off pimple patches and pore strips to see what they soaked up overnight. So it’s no wonder why one set of nose strips
can’t stay in stock.

Hero Cosmetics’ Mighty Patch Nose strips sold out in under six (!!) hours on launch day at the beginning of the year and have been out of stock ever since. After what seemed like an eternity of waiting, these disgustingly satisfying strips are back in stock on Amazon. Even better, they’re on sale for Prime Day
. Score this discount with an Amazon Prime subscription
, if you haven’t signed up already.

The brand seriously took off with its original pimple patches
, and they’re back at it again with a product we have yet to see on the market. As you’ve likely already figured out, it’s a hydrocolloid nose patch. We’ve been waiting for something like this forever—after all, your nose has tons of pores that get congested and form those impossible-to-remove blackheads.

When your pores are having a bad day and are looking more noticeable than usual, the Mighty Patch Nose
can easily draw out all the gunk from your pores. Simply put it on at night and peel the patch off the next morning to admire (or shudder at, depending on your threshold for gross things) the fabulous work it did, all while you were sound asleep.

And if you’re worried about the patch irritating your skin like other pore strips might, stress no more. It’s made of 100 percent medical-grade hydrocolloid, which is drug-free, non-drying and compatible with sensitive skin. Below, hear more about the Mighty Patch Nose’s
many benefits that got it sold out in under six hours.

RELATED: These $12 Pimple Patches Work Overnight & Got Me To Stop Picking At My Acne 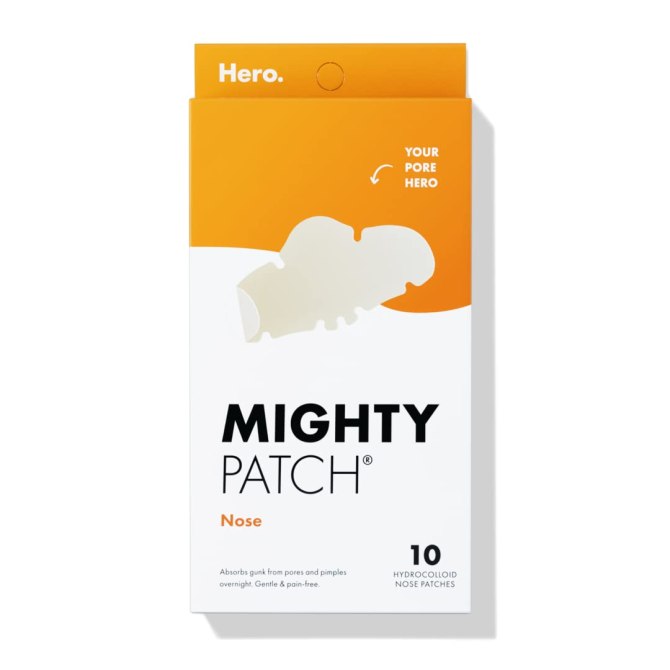 Just as how the product itself went out of stock, you can get clearer-looking pores in just six hours, too. The nose strip
absorbs pore and pimple gunk, as well as oil, like a sponge. The patch is thin and flexible, so it won’t feel like you’re wearing anything on your nose. The extra-large size allows it to cover a whole lot of territory and also fit across different-sized noses with ease. It molds to your nose’s shape and doesn’t hurt or irritate upon removal. In fact, Hero Cosmetics doesn’t use any adhesives.

Whether you’re already a big fan of the brand’s iconic Mighty Patch or you simply want to clean up your nose pores, Mighty Patch Nose
is on it.

“I have been using these strips on my chin once or twice a month since the last update and I have to say that my skin looks the best it ever has,” wrote one reviewer. “Once this product clears your skin, it keeps it that way!!”

Even those who have blackheads out the wazoo praise this hero product
.

“My nose had all [these] tiny blackhead dots [and] I was feeling pretty insecure about it. So I tried this and literally after six hours 70 percent of them were gone, like poof! Magic! Gone! Don’t ask me how this witchcraft was able to do it,” wrote another shopper. “But I am obsessed with it. I did another patch before bed a couple nights later, the remaining 30 percent gone!”

Because the Mighty Patch Nose
sold out so quickly when it launched at the beginning of the year, we suggest you make a mad dash for these innovative, gunk-sucking nose strips ASAP.