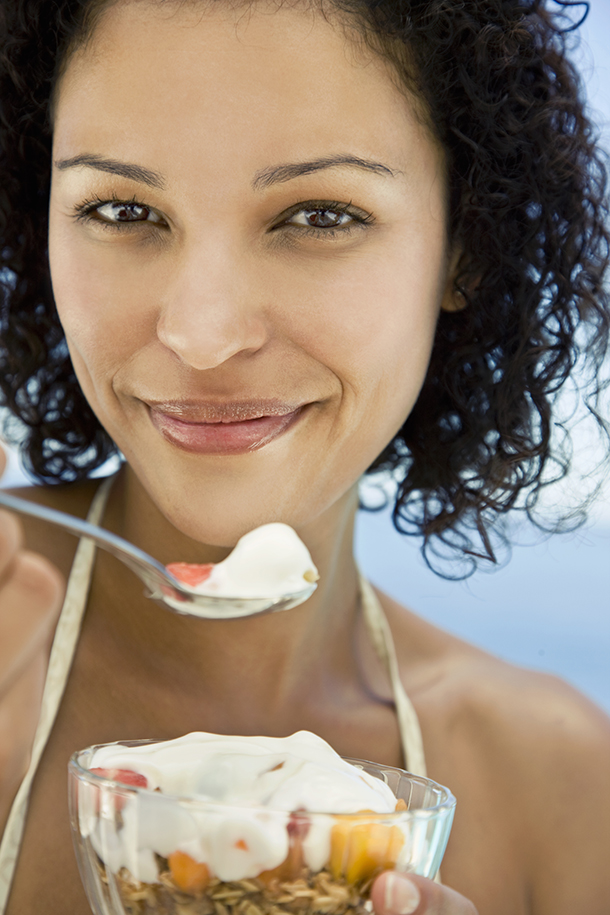 We’ve tried just about every cleanser, oil, moisturizer, and serum combo in the book—anything to keep our skin looking fresh, radiant, and we’ll admit it, breakout and wrinkle free. But if you’re like us, you’ve noticed sometimes, there seems to be other factors in the mix when it comes to great skin. Stress at work, that time of the month, the environment, and yep, the big one: what you eat. To learn exactly how healthy skin correlates to your diet, we chatted with Nigma Talib, ND a Naturopathic Practitioner based in London and author of the best-selling book Younger Skin Starts in the Gut. Dr. Talib, whose clients have included Penelope Cruz, Kate Bosworth, and Sienna Miller, explained exactly what four dietary problems can cause aging and what you can do to get your gut in tip-top shape so your skin can reap the benefits!

What are the Four Faces of Aging?
No, they’re not fancy science fiction terms. They’re totally real! Basically, the “faces of aging” are what Talib refers to as the visible aging symptoms that are associated with diets high in certain foods, primarily these four culprits: wine, dairy, gluten, and sugar.

According to Talib, the typical symptoms of “wine face” are pronounced lines or redness between the eyes, droopy eyelids, enlarged pores, dehydrated skin with feathery lines across the cheeks, reddish cheeks and nose, and deep nasolabial folds. “Drinking wine dehydrates the skin, which worsens the look of fine lines and wrinkles,” she says. And because of its high sugar content, alcohol can actually damage collagen, which we all know is essential in keeping skin nice and firm.

The second “face” is dairy, which appears via swollen eyelids, widespread acne and spots, bags and circles under the eyes, pale cheeks, and concentrated spots on the chin, says Talib.

Next, “gluten face” shows its self through spots on the forehead, cheeks and chin, puffy and red cheeks, and dark patches around the chin.

And lastly, “sugar face” is present when there are heavy lines and wrinkles on the upper forehead, sagging under the eyes, gaunt skin, a gray or pasty white hue to the skin, spots all over the face—specifically pustular acne—and thinning of the skin, explains Talib.

But why the gut?
It’s one thing to say “you are what you eat,” but it’s an entirely separate thing to know that means. “The gut is the control region in the body that controls your health and well-being,” says Talib. Anything that goes wrong in your gut caused by what you eat actually turns into prematurely aged skin, which Talib calls “digest-aging.”

But ultimately the gut is mission control for so much more than just your skin’s appearance. “It controls many things including your brain and the feel-good neurotransmitter called serotonin,” says  Talib. “Depression and happiness can start in the gut,” she explains. “I have often found that my patients who have anxiety and depression-like symptoms also have digestive issues, and once we get to the root cause of those, the anxiety and low mood also lift.” See, we told you your gut was mega important!

What can you do?
We’re not ones to advocate restrictive, unrealistic diets, but limiting trigger-causing foods might just be what your skin—and gut—needs. Start by avoiding wine, beer, sugary fruit drinks and sugary drinks a.k.a. soda, dairy, and gluten, says Talib. “I also tell my clients to remember the mnemonic BROWSK—barley, rye, oats, wheat, spelt, and kamut—as these are the types of grains you need to avoid,” she says.

In addition, Talib recommends adding certain foods to your diet: high amounts of green leafy vegetables, protein-rich foods, antioxidant-rich fruits, and foods with good fats like those found in avocado, pumpkin seed oil, and coconut oil. “There are also other simple swamps you can do, like make your own oil-based salad dressing rather than buying something from the supermarket,” she suggests. “There are also many gut-friendly grains that can replace gluten in your diet,” she adds. “Look for amaranth, buckwheat, brown or wild rice, chia seeds, quinoa, or feff (an Ethiopian grain).”

And don’t forget exercise! “It boosts the happy and good hormones and improves telomeres,” says Talib. Exercise can help counteract some of the inflammatory load caused by sitting—a growing epidemic among so many of us office workers. In fact, Talib predicts getting up from your desk and walking around will soon be added to the anti-aging must list. Even just walking around the office for a few minutes at least once an hour can make a difference, she says.

But remember, not every diet plan is right for everyone, so it’s best to consult Talib’s book or a nutritionist before making any drastic dietary or exercise changes!

More from Daily Makeover: 5 Foods You Must Eat for Glowing Skin