Fact: Most things that taste amazingly good aren’t good for you (we’re looking at you, cheeseburgers and fries.) The thing about these foods, though, is that we know were not doing ourselves any favors in the health department, but we get that indulging once in a while isn’t the end of the world. 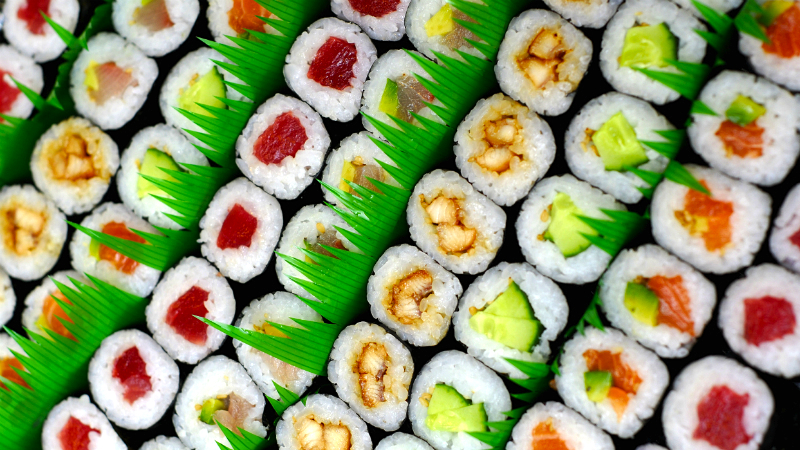 1. Wheat bread and multi-grain bread.
Most people think they’re doing themselves a healthy favor when they opt for “wheat bread” on their deli sandwiches, or pick up a pre-packaged loaf of 7-grain at the supermarket , but the fact remains most mass brands not much better for you than plain old white bread, as they’re made with refined grains, which means you’re not getting the full nutritional benefit of the actual whole grain.

A good way to tell whether your wheat bread is really whole is to read labels—if the first flour in the ingredient list is refined (code terms include “bleached” or “unbleached enriched wheat flour”) it’s most defintiely not “whole wheat” or “whole grain—it’s essentially white bread with a brownish tint. In a restaurant and can’t see the label? Take half the bread off a sandwich, which not only nixes calories and carbs, but also will lessen your refined flour intake.

2. Muffins
Or “cakes for one” as we like to call them, it’s absurd that muffins are marketed to us as breakfast foods, when they really should be considered decadent desserts. Many pre-made muffins—even “healthy” kinds like bran—are completely oversized, and clock in at over 350 calories (others can get as high as almost 700 calories and nearly 40 grams of fat!), and they’re packed with refined grains and sodium.

Homemade muffins can be a different story, as you control the size and what goes into them (check out Pinterest for some good healthy recipes), but most pre-made versions are one-way ticket to calorieville. If you’re at brunch, and a basket of mini muffins arrive, one won’t hurt since they’re so small, but stop there if you’re ordering other things.

MORE: How to Cheat on Your Diet—and Still Lose Weight

3. Store-bought apple sauce
In this case, we’re talking about mass-market applesauce that you find near the juice in typical supermarkets, which is loaded with added sugar. In fact, one leading brand’s snack-size cup of has 90 calories and 22 grams of sugar, and the second ingredient is high fructose corn syrup. Instead, stick with an actual apple—one small one has around 65 calories, 3 grams of fiber, and 13 grams of sugar, but it’s natural sugar, not added sugar.

If you live near a specialty supermarket like Whole Foods or a health food store, look for unsweetened applesauce, or try to make your own this season.

4. Already-made salads
You’ve heard it before: Just because something is called a “salad” does not make it automatically healthy. In fact, some salads have more calories than a Big Mac. The offenders: Salads packed with meats, cheese, bacon, crutons, and those drenched in dressing (yes, even heart-healthy olive oil.)

The trick here is stay away from already-made dishes like Chef’s Salads (which is packed with ham, turkey, eggs, cheese, and, usually a creamy dessing), Cobb salads (blue cheese, egg, bacon, chicken, and occasionally avocado), and anything with fried chicken, crispy strips, or heavy cream-based dressings. Craving a Ceasar salad? Ask for dressing on the side and dip your fork into it before each bite, as opposed to pouring it on.

Again, all of the above salads can easily be prepped at home, and you can control exactly how much meat (try a slice or two of turkey or half a grilled chicken breast, as opposed to half a pound), cheese (one teaspoon of crumbled cheese, or one to two thin slices chopped), and other ingredients goes into them, which obviously makes them healthier.

Restaurants will be happy to make substitutions, and while pre-made grab-and-go salads are occasinoally a necessity, you can usually control the dressing, and weed out some offending ingredients.

MORE: How I Broke My Liters-a-Day Diet Coke Addiction

4. Cranberry juice
Much like lemon or lime juice, pure cranberry juice is extremely tart and pretty much undrinkable on its own, so most types found in supermarkets and at restaurants—actually called “cranberry juice cocktail”—are jam-packed with sugar and sweeteners. In fact, an 8-ounce glass of most store-bought cranberry juice has more sugar than a can of soda!

The alternative? Seek out cranberry juice concentrate, which is often sold in very small bottles in the juice aisle. It’s purely the juice of untouched cranberries, so it’s way too tart to sip on its own, but when a little is poured into water or seltzer, you get the flavor and the many health benefits craberries have to offer.

5. Granola
It’s ironic that we often attribute the word “granola” to healthy types, considering the crunchy snack is anything but. Most mass-market granola is made with rolled oats, honey, and puffed rice, none of which have any real nutritional value. It’s also packed with sugar, fat, and calories (some clock in at 400 a cup!) and low in vitamins and minerals. Plus, granola is a food that’s hard to digest which can lead to bloating, gas, and other stomach issues. Why not snack on fiber-rich cereal or a handful of almonds instead?

6. Sushi rolls (well, some)
While lots of sushi rolls make a sensible meal—nothing wrong with fresh fish and a little white rice—some types are packed to the gills with fat and calories.

And while a California roll isn’t unhealthy, per se, its abundance of avocado and (often) imitation crabmeat aren’t the best choice if you’re already eating spicy rolls, or anything fried.

The solution? Next time you’re out for sushi, choose a mix of rolls that only include fish and vegetables like cucumber, radish, scallion, or carrots, and treat yourself to one “treat roll” like Spicy Tuna. If you’re low-carbing it, ask for your rolls to be wrapped in cucumber instead of rice, and fill up on starters like miso soup, a little edamame, or a green salad.

MORE: How To Look Thinner in Pictures

7. Gluten-free foods
If your body simply cannot tolerate gluten, occasionally indulging in treats made without it isn’t so terrible. However, it’s key to understand that most aren’t healthier, they’re just made without gluten. Case in point: According to Eat This, Not That two of Glow’s Gluten-Free Gingersnap Cookies contain as much saturated fat as 10 McDonald’s Chicken McNuggets and more calories than seven Nabisco Ginger Snaps! In addition, certain brands use eggs and canola oil to bind loaves of bread, which means more fat and calories per slice. Check out this article, which provides healthier gluten-free options.

8. ‘Juicing’ juices
We hate to break it to all you juicing fanatics, but sipping green concoctions all day isn’t as healthy as you might think. If you’ve ever made your own, you’ll know that it literally takes pounds of produce to produce 16 ounces of juice, whcih is why we all think it’s so good for us.

As the website Quick and Dirty Tips pointed out, theoretically, we’re getting the nutritional equivalent of at least a dozen servings of fruits and vegetable in every glass of fresh pressed juice, but the problem is that juicing also concentrates the natural sugars in the produce while separating out the the fiber that would normally slow the absorption of sugars. That means, if you drink the juice by itself, those sugars will be quickly absorbed into your bloodstream. Check out this handy chart to clock which fruits and veggies pack the most sugar into juices, and avoid replacing all your meals with juice unless you’re doing a strict liquid-only cleanse.

9. Flavored Greek yogurt
If it seems like Greek yogurt is everywhere these days, that’s because it really is. The thick, creamy, protein-heavy snack first becamse popular in the States in the late 1990s by the brand Fage, but it’s now been co-opted by every yogurt brand under the sun—and lots have been doctored up with artificial junk. Fruit-flavored Greek yogurt is the worst offender, as most contain fake flavors, sweeteners or added sugars. And—according to one health site—the protein content in flavored Greek yogurt (as compared with plain) is quite low.

10. Fancy coffee drinks
In its most basic form, coffee is pretty harmless, calorically speaking (black coffee clocks in at 5 calories per cup), but it can be hard to chug without adding in a little extras. While a splash of skim milk is fine, it’s not fine to sip frappuccinos—which are filled with fat and topped with whipped cream—every day. In fact, a grande vanilla frap from Starbucks has 430 calories, 14 grams of fat, 72 carbs, and 69 grams of sugar. Yowza.

And while a skim latte is a better choice—a grande size has 130 calories and no fat—it’s still pretty caloric to drink every day. Instead, try limiting your latte intake to one or two a week.

MORE: 101 Fashion Tips and Tricks Every Girl Should Know