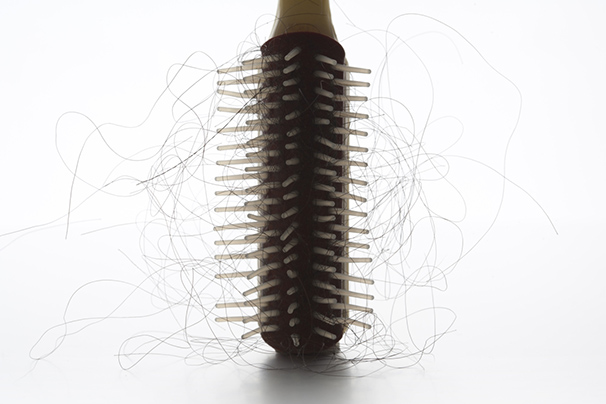 Although hair loss isn’t anything new, it’s become a major topic of discussion in the beauty world in the past few years. Whereas hair loss was once regarded as a problem that exclusively affected men, it’s now considered a major concern for women, too. While the recognition of this health concern is a huge win, it can also result in false diagnosis—as in, self-diagnosis. Before you dive head first into the new sea of hair growth products, it’s important to differentiate between hair loss that’s abnormal and hair loss that’s nothing to worry about, because believe it or not, experiencing a certain amount of hair fall is normal and even healthy.

“Normal shedding of the human scalp is up to 100 hairs per day,” says Dr. Robert Leonard, the Founder and Chief Surgeon of Leonard Hair Transplant Associates and Medical Advisor to Keranique. This a result of the hair’s natural growth cycle, which consists of three stages. At any given time, ninety percent of the hair is in the growth phase, which lasts two to six years based on genetics. Another three percent is in the intermediate phase that lasts two weeks—the hair is static for a time being. “During the last phase [which accounts for about six-eight percent of the hair], the hair follicle is completely at rest and the club hair is completely formed. Pulling out a hair in this phase will reveal a solid, dry, white material at the root,” Leonard says.

To diagnose a bigger issue versus the aforementioned healthy loss, be aware of why you’re losing hair. Rest assured: You may just require a simple change to your routine.

Know Your Average Loss
“In general, you will see greater shifts in natural daily hair shedding between different ethnicities,” says Diane Minar, a senior scientist at Unilever. “Caucasians generally lose on average 100 hairs per day, Asians about 70, and Africans about 60 hairs per day.  This is because the amount of hairs per square inch more drastically changes between these ethnicities,” Minar adds. Blonde hair will experience more loss than red or brown because the lighter the hair, the more hairs per square inch there are.

Consider the Weather
Just like your dog sheds more come winter, human hair loss patterns also change with the seasons. “There are two times during the calendar year when humans experience seasonal hair loss,” Leonard says. “The first is in July and August and the second—and more significant—is November and December into half of January.” The hair is thickest in the summer to serve as protection from the sun. He adds, “The shedding during these months is a temporary situation. The hair will grow back in about three months.”

Be Aware of Damage
“The amount of hair women see falling daily also greatly depends on the condition of the hair. If the hair is highly damaged then breakage will occur, adding to the number of hairs seen,” Minar says. Check fallen hair to see if the root in still intact. If there is a raise at the end of the hair, this is a damaged strand that did not complete the hair cycle. Be conscious of how much you heat style, put the hair in an elastic only when dry, and apply leave-in conditioners at least once a week.

Account for Length
Regardless of damage, women with longer hair may perceive more hair loss. “This is because longer hair will take up more space and appear to be a greater volume lost,” says Minar.

If your average daily loss seems above average even after taking these variables into account, Dr. Leonard has a few treatment recommendations. “Using a topical treatment containing minoxidil like Keranique Hair Regrowth Treatment and a low level laser therapy, Capillus272, can stimulate the hair growth cycle to make hair grow faster and longer once again,” he recommends. However, the sad truth remains that there’s no way to add more hair to the scalp. Your best bets are decreased damage and extending the period in which your hair rests in the hair cycle. “Rogaine works by anchoring the hair strand, preventing it from shedding as quickly as it normally would,” says Minar. Check out the newly released Women’s Rogaine Hair Regrowth Treatment, a foam formula specifically for women’s needs.

Read more: The Truth About What Volumizing Products Really Do to Your Hair