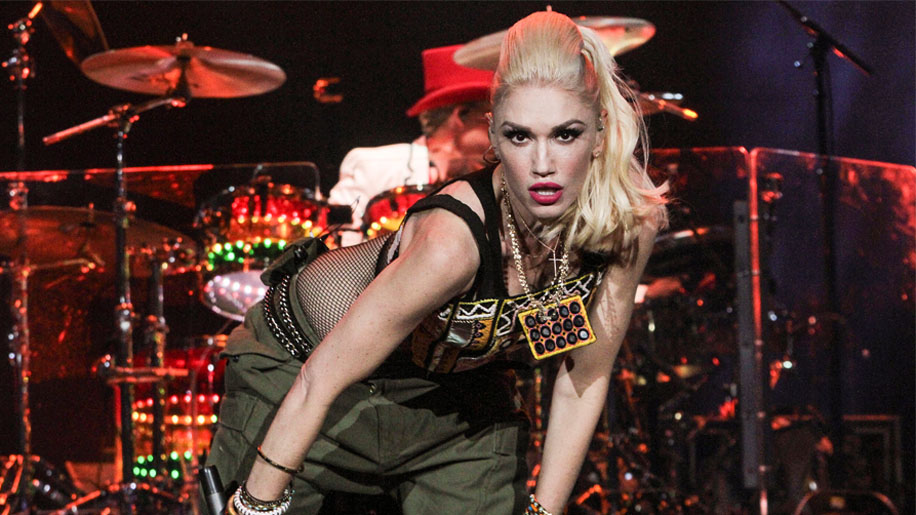 When it comes to multihyphenate talent, Gwen Stefani is an undisputed inspiration. The singer, TV personality, designer, fragrance mogul, and mother has always embodied what it means to be a strong, successful woman. Her ever-evolving style and lyrical skill helped make No Doubt a household name in the ’90s, and she managed to flawlessly transition into a solo career in the early 2000s—all while raising three sons.

Now, in the midst of a divorce from longtime husband, Gavin Rossdale, Stefani is ready for yet another transition. Set to release an upcoming album that she refers to as her “spiritual workouts,” she’s also (finally) releasing her first makeup product, in collaboration with Urban Decay.

The UDxGwen eyeshadow palette will launch just before the holidays—November 22—and it’s already the talk of the beauty world. We sat down with Stefani in L.A. during a celebration for the product to talk about the collaboration, her ever-changing style, and what really inspired her signature blonde hair.

Why she chose Urban Decay (and eyeshadow!) as her first foray into makeup:
I always wanted to do a makeup line; I’m the girl who ran home from school and put the Mary Kay on. I was always really inspired by Old Hollywood and vintage and retro, so I had wanted to do it for the longest time. There were different talks about doing it with different people, and it just never worked out. It’s freaky that it’s taken this long to do it, but it’s perfect timing because it’s [Urban Decay]. They’re these Orange County girls who created this Orange County company that’s just a little to the left, and did it their way, and they have an edge to them—I just relate to them so much.

They were building their thing while I was doing No Doubt, and so when they came to me it was just a really, really cool chemistry, so they kind of led the way. I didn’t know what to do first—lipstick, palette, I don’t care; I want to do all of it.

How the palette came to be filled with lots of super-wearable neutrals:
If you look at the makeup I wear, it’s really quite simple. I know that sounds crazy, but it’s not bold shadows you know? I mean I’ve done everything, but most of the time, my eye is simple. I wanted to make it real and really what I wear.

Where she pulls inspiration for her ever-changing style:
My fashion and looks, it really just happens in the moment … It just comes from being in a situation, and it depends what I’m being creative for. It’s just like “What mood am I in?” “What do I look like right now?” “What do I want to hide?” “Who do I want to be today?”

And that’s why makeup is so fun, because to me, it’s like war paint; it’s like you put it on and that’s how you’re going to face everybody. I have different looks for different things: If I’m going to the beach, I put that black all in there [in the inner rims of eyes], and it’s like “Oops, I forgot to take my makeup off from last night.” You know what I mean?

How she made her voice heard in a male-dominated band:
I think that the big change for me was once I started writing music, because before that I was quite passionate about my boyfriend [No Doubt bandmate Tony Kanal] and about eating bean-and-cheese burritos and, like, sleeping. I didn’t really have a lot going on, and I think that when the breakup happened [from Kanal]—which was just devastating at the time because I had only had one boyfriend, and he was in the band—I became really empowered. I knew I had a gift, and I was quite spiritual about that and recognizing it—it was just like one song after another.

Where that signature platinum hair started:
Once he broke up with me, my style changed loads too. It was just like, “I’m going blonde.” Like, I don’t care—if I have to scrape all of my money together to get my roots done, I’m doing it. It was that kind of thing [where] it wasn’t until the break-up that it really started.

Why her spiritual health is a higher priority than physical health right now:
I used to spend a lot of time staying in shape—a lot. The past five years, I haven’t really worked out, and I know people are going to be mad at me for that. But for whatever reason, I did a lot of it for a long time, and this is not that time. I think that you go through different phases of your life where you have to struggle with it, and other times it’s just not really a struggle.

I’m trying to get my brain in shape, my mind. And the way I do that is music. The reason I haven’t lost my mind this year is because I’ve been in the studio writing and just getting it out and being creative, and whenever that happens, it’s literally a gift from God and I’m just honoring that, and I’m so grateful. And my spiritual workouts are what I’m doing right now.