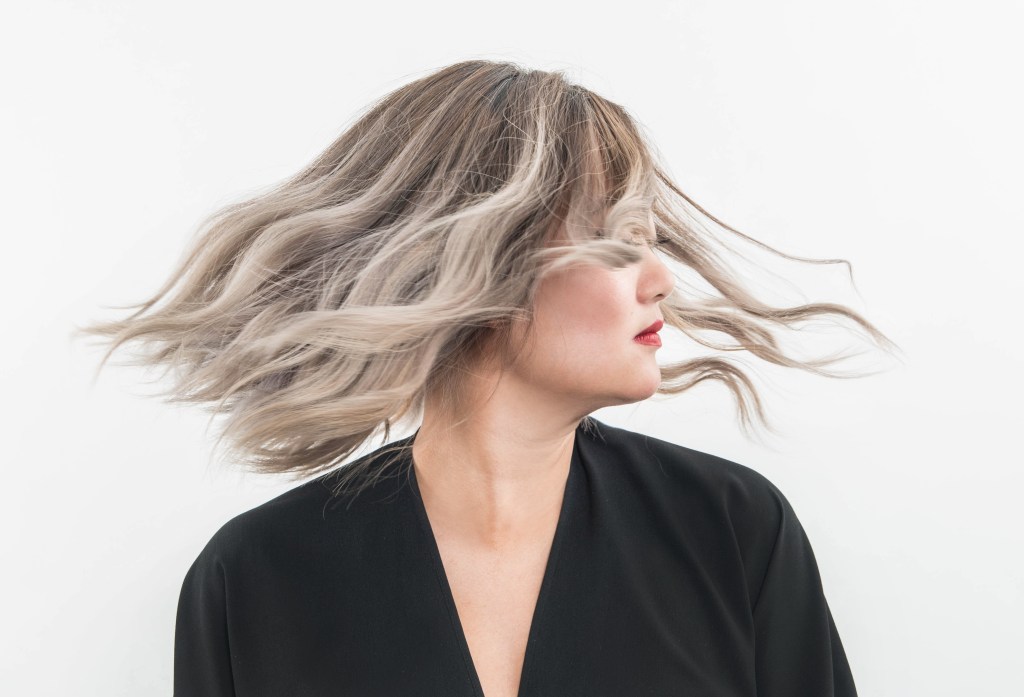 Let me preface this by saying that I’m a creature of habit, especially when it comes to my hair. I don’t like change. When something works for me, I usually stick to it, which is why my hair has been basically the same (brunette and very, very long) for the past 24 years. The minor exceptions are a blunt bob as a toddler and a very ill-advised chop during my freshman year of college. I’ve colored my hair a reddish-brown (the same color that it was when I was a small child) but have otherwise pretty much left my hair untouched. 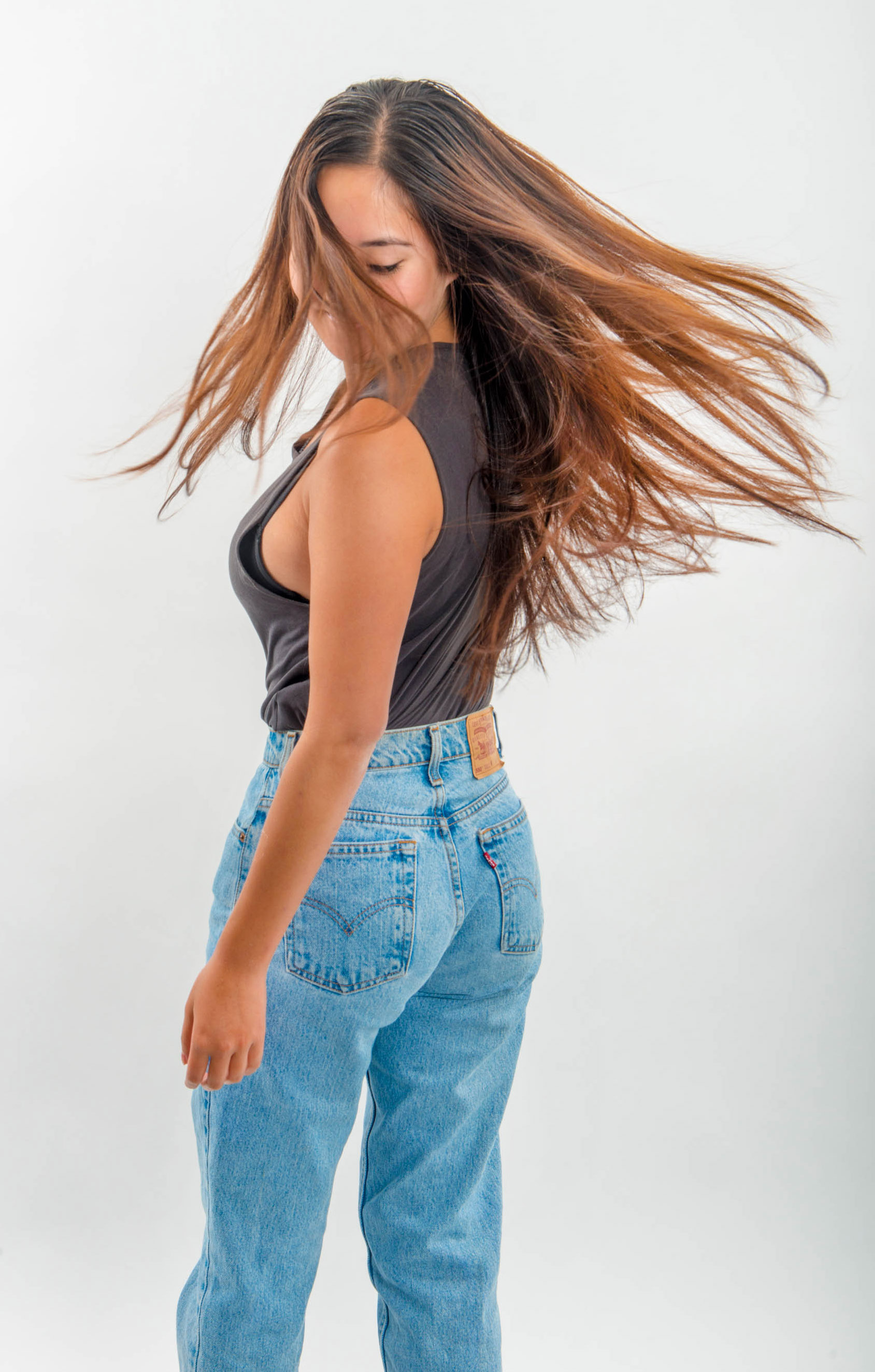 Keeping my hair long has also been a security blanket of sorts—it’s easy to wear and works well with my round face shape. For my slightly wavy texture, long hair was also the easiest for wash-and-wear and didn’t take much effort to style, which is good since I don’t own or use any heat tools and am a bona fide lazy girl when it comes to my hair.

So what does it take to change the hair routine of a girl set in her ways? Marga Esquivel, apparently. Marga, besides being my girl crush forever, is the up-and-coming model of the moment, due largely to her silvery gray hair. My unabashed love for Marga developed after I saw her walk in Gucci’s resort show this spring, where her gray hair was the perfect complement to Alessandro Michele‘s granny-chic vibes. I wasn’t the only one to fall for her either—she’s been steadily dominating runways and editorials ever since. The more shows I saw Marga walk in, the more I thought about coloring my hair. Gray wouldn’t be that hard to achieve, right?

After a full season of seeing Marga on the runway, I knew that if there was ever a hair trend that I would adopt, this would be it. Platinum has been heavily in style for a few seasons now, and while I love the pale blonde shade on everyone from model Soo Joo Park to our own beauty director, Rachel Adler, I was never quite sure it would work with my skin’s yellow undertones. Marga’s skin tone is similar to mine, which pretty much sealed the deal. 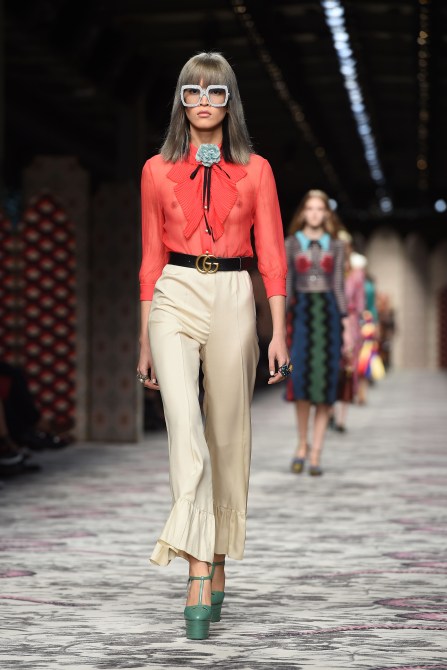 When I announced that I wanted to go gray, everyone had an opinion. My mother simply asked, “Why?” Friends who’d bleached their hair warned me that my own thick strands would become dry and straw-like. The StyleCaster staff, however, was extremely excited and immediately starting supplying me with hair masks and deep conditioners. Here are some of the best gems I received from both the concerned and the veteran:

“Don’t wash your hair for a few days beforehand to save your scalp from the bleach.”

“I was there for eight hours, so definitely bring things to do.”

“Be prepared to cut off lots of hair.”

That last piece of advice made me feel … anxious. Going gray is one thing, but chopping off inches is quite another.

But there was no turning back. Marga hair goals, I reminded myself.

Rachel set up an appointment for me with colorist Zoe Wiepert at Bumble and Bumble. Zoe is known as “the Blond Whisperer,” and she’s also responsible for Rachel’s own sparkly ice blond, which made me feel more at ease since copious amounts of bleach would be used in my own quest for gray.

When I arrived at the salon at 11:30 a.m., I met with Zoe and stylist Carrie Hill, who was going to cut off some of my hair in preparation for the color process.

I told them all I wanted was to keep as much length as possible. We agreed on cutting a few inches, and then Zoe would bleach my hair to see how much color she could lift without damage. If need be, I would say farewell more length to help with the bleaching.

After the cut, the color process began. Zoe’s cart was filled with wads of cotton, Saran wrap, and a bowl of lavender-colored goop that I later discovered was bleach.

“Ready?” Zoe asked before she placed a piece of cotton on my head, painted on the first coat of bleach, and wrapped a piece of plastic wrap on the bleached strands. The cotton, she explained, was to keep the bleach away from my scalp because the heat from my head would cause the bleach to develop more quickly. After she dyed most of my hair the first time, she would go back and bleach the roots in a second pass. This is called a double-process, which I had always heard people talk about when they were going platinum blonde.

When half of my head was Saran wrapped/cotton-cushioned/bleached, I saw steam rising from the back of my head. Zoe began removing the plastic and cotton and then rinsed my hair, which had turned from reddish-brown to a garish orange. When we returned to her station and I saw it, I tried to remain calm despite the fact that my hair was the color of a Flaming Hot Cheeto. 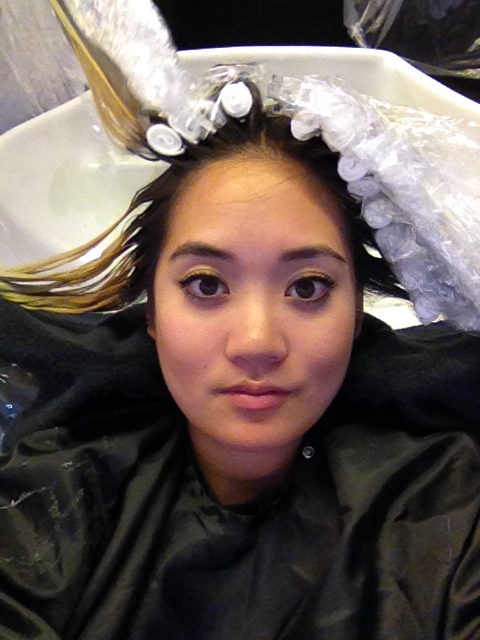 “Your color’s not lifting very well on the ends,” Zoe told me as she painted the last of the bleach on my hair. At this point, we were three hours into the appointment and many, many bowls of bleach into the process. “If you want to keep the length, we can make it look really good, but if you want the color, you might have to cut it shorter, to where the color lifted.” She gestured to just below my shoulders and my heart sank.

While the bleach did its work, I debated whether or not gray was worth it. The last short haircut I got (that horrible bob during my freshman year of college) still haunted me. But Marga! I would never get to gray unless I cut my hair. I could feel tears welling up—my hair was orange, and I might have to cut it off. As a welcome distraction, I’d been live-tweeting the entire process (#cadygoesgray, if you want to search the tweets), so I asked my Twitter timeline what I should do. I sent frantic texts to my friends. I tried to reason with myself, the way I do whenever I feel emotional about my hair, by telling myself that it’s already dead and it’s just protein; this did little to reassure me. 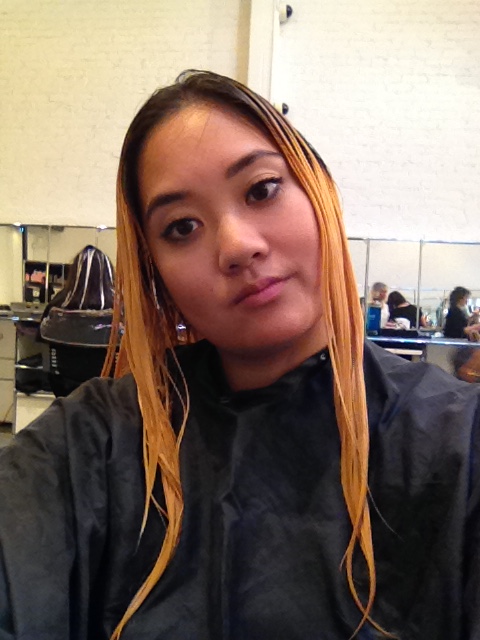 Eventually, I confidently told Zoe: “I want to cut it off. As long as I can get to the color I want!” She explained that we wouldn’t be able to do the double-process we’d planned since the color was having so much trouble lifting from my dark and previously colored hair. Instead, she painted highlights on my roots, which would help to blend the shade more naturally.

This was more gentle than putting lots of bleach on my roots, which (obviously) would have been much damaging.

“I promise it will look good,” she reassured me once again as she took out my foils, revealing bright yellow hair. At this point, I was wondering if gray hair was going to be my white whale. But there’s not much else you can do when your hair is covered in bleach and feels like it might fall off, so I just nodded and trotted off to the sink where Zoe began the toning and glossing process. Here was where the magic happened—at least from what I could tell, since my head was in a sink. My hair went from a garish yellow-orange blonde to a delicate ombré gray. SUCCESS! GRAY! PEAK MARGA LEVELS!

There were a few spots on the tips of my hair where the orange hadn’t lifted, but those were why we would cut off more hair. To say I was relived would be the understatement of the year.

At this point, we’d been at it for about eight hours, and no one was left in the salon except for us and the cleaning staff. I had run out of snacks. I was surprised that Zoe was still extremely chipper and excited to keep working on my hair, despite the fact that it had taken almost all day to get me to this color and she had done everything herself, with no breaks. I was exhausted (at least, emotionally), and all I’d done was sit in the damn chair.

We headed downstairs to where Carrie had been patiently waiting and collectively decided on a Beyoncé-esque “lob.” I was still so high off the supreme grayness of my hair that when Carrie cut off the first long section, I didn’t even feel sad. She angled the bob to be longer in the front, where my hair was the lightest and sliced lots of subtle layers for my hair so it wouldn’t become triangular as it grew out.

At 10:30 p.m.—11 hours after I’d arrive—we were finally finished, and I couldn’t have been happier. My hair looked gray, sophisticated, and chic. We held an impromptu photo shoot, and I couldn’t help but beam the entire time. Orange hair was a fleeting nightmare. My hair was beautiful silvery gray!

Carrie and Zoe advised that I hold off washing my hair for a few days to let the color set. Zoe also let me know that I could freshen the gray with a gloss, since gray is one of the hardest colors for hair to hold. She also told me that if I wanted to go even lighter and more silver, I could come back to the salon in a month for the double-process, which I will definitely be doing. There are new levels of silvery gray to reach, and I can’t wait to try them all. My struggles through orange shades and shorter lengths were already a distant memory–I just wanted more. 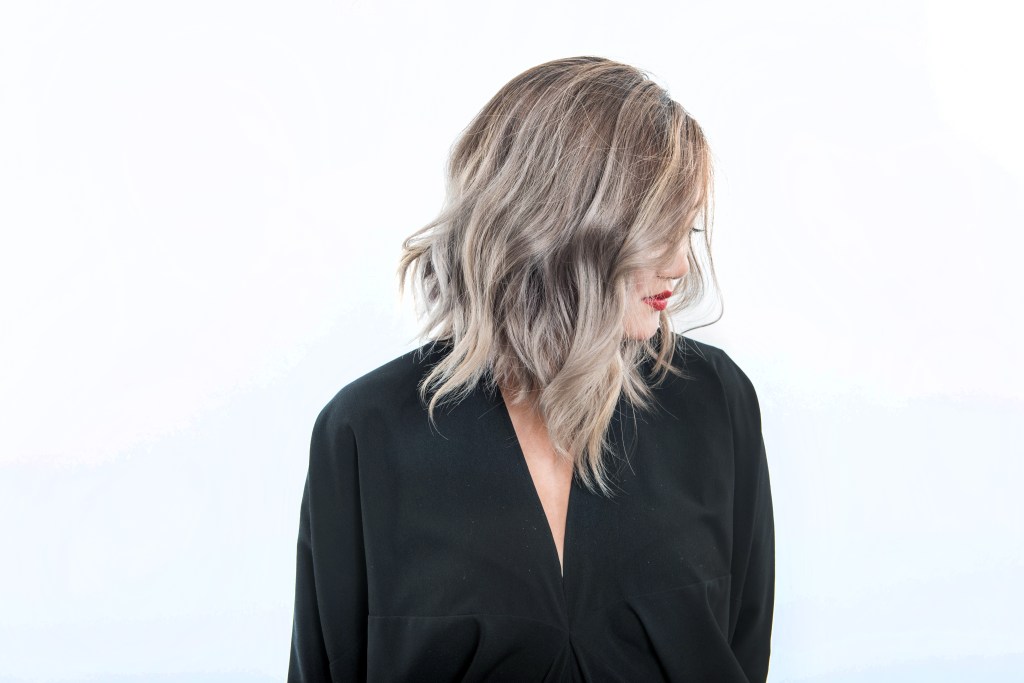 For the first time in 24 years, my hair is drastically different. A gray lob makes me feel like a fox whether I’m headed to work in the morning or to the bar after-hours. It’s definitely not as “safe” as having long hair to hide behind, but that’s not a bad thing. Unnaturally gray hair is a statement, and it’s one that I finally feel confident making.

All original photos by Tiffany Hagler-Geard