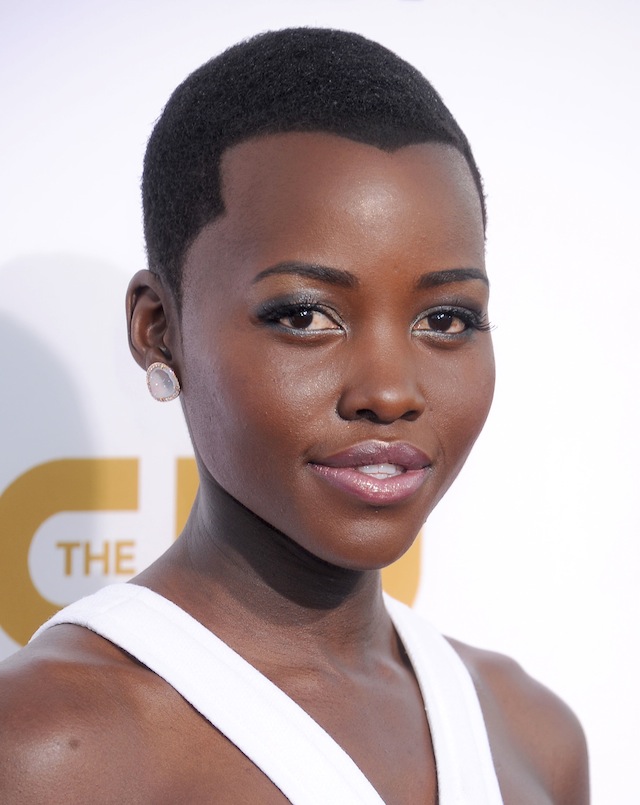 Lupita Nyong’o has stolen awards season so far – not only on the nominations front (and winning for best supporting actress last night at the Critic’s Choice awards), but also in the beauty and fashion categories. The newcomer has gotten everyone talking with her show-stopping bold lips and sleek, on-trend dresses.

Last night was no different at the Critic’s Choice Awards, as she stunned on the red carpet in a white Calvin Klein dress with body-hugging cut outs. But, our favorite part of the look was of course her hair and makeup – and it may be one of the best ones yet this awards season. To complement her white dress, makeup artist Nick Barose created a “pearl goddess” theme for her makeup. To top off the look, Ted Gibson gave her an exaggerated widow’s peak, using a combination of shine lotions (and a wax) to calm flyaways while adding shine. He also used the help of a fiber filling agent to really accent her widow’s peak.

As for the makeup look, Barose created a shimmering pearl highlight on the brow bones and a shimmering pale pink on the lips to really drive the “pearl goddess” look home – and now we know why we couldn’t take our eyes off of her on the carpet, she was literally glowing. He started by prepping her skin with MAC Matchmasters foundation to keep her skin matte and create a contrast with her shimmering eyes. To add to that, he dabbed Mally Beauty Face Defenders on her T-Zone. “With shimmer, you want the rest of the face to look polished to avoid too much shine everywhere,” Barose said.

He then filled in her brows to add arch and an elegant ’50s movie star shape to the brow, using Votre Vu Arch de Triumph Brows Definer. Barose noted that you shouldn’t be afraid to go dramatic with the brows, making them slightly longer and fuller to frame the dramatic, pearlized eyes. Then, he dabbed Chanel Illusion d’ Ombre in 81 Fantasme, a cream gel shadow into Nyong’o’s lids first with a finger, adding some of the color into the inner corners of the eye with a small brush. To make the eyes pop, Barose placed shimmering black powder shadow and liner along the outer corners of the eyes (as well as in the crease) using Surratt Beauty Eye Baton in Fumee Noir. He added two coats of mascara to finish the eye look.

Then, Barose added a hint of color to her cheeks by using a burgundy cheek stain just on the apples of the cheek. “Deep burgundy on cheeks with that dark chocolate skin tone looks like a subtle flush,” said Barose. He chose Jouer Tint in Dahlia and blended it in to the apples of the cheeks using a Beauty Blender. For the lips, Barose used Chanel’s Precision Lip Pencil in 59 to sketch in the lips and then added one coat of pale pink lip gloss (MAC Cosmetics Lipglass in LoveChild) all over them, and an extra coat just in the center of the lips as the final touch.