Update: 4:45 p.m:  Garnier has issued a statement: “This post on Reddit is an isolated report–we have not received any other similar reports from consumers using the Garnier Micellar All-in-One Waterproof cleanser (with the blue cap).  We are trying to get in touch with the person who posted the thread to learn more, as consumer safety is our absolute priority.  We did see the Reddit post referenced reviews on our Garnier website about solid particles appearing in our regular All-in-One cleanser (with the pink cap).  This is a result of an ingredient (which is part of the formula) that solidified in the micellar water and does not impact the product’s effectiveness or present any health risk to someone using it. We have already corrected this in our manufacturing process.”

Originally posted 12:30 p.m:  Fact: Any beauty obsessive has a can’t-live-without, desert-island product. For me, it’s a super-pigmented, matte lipstick, but for many (including a few of my fellow editors) it’s Garnier’s Micellar Cleansing Water. Deemed the lazy-girl way to remove makeup, cleanse skin, and tone, Garnier’s hero product has become the ultimate, cult-favorite staple—and at $8.99 a pop, it’s a major drugstore steal. But according to a recent viral thread on Reddit’s Skincare Addiction, consumers have noticed a, well, disturbing issue with the formula: The water is allegedly growing bacteria, which has resulted in broken out and irritated skin for some.

Yup, sorry for spoiling your lunch, but an outraged (see: heartbroken) Micellar Cleansing Water user just took to Reddit to share their horrifying experience. The user started, “Just a warning to you all, something is going on with some bottles of Garnier Micellar Water. I have used two bottles of this stuff without a problem, and I considered it my [holy grail] cleanser. Then, something weird as fuck started growing in my third bottle (which I got from Ulta), and it kept getting bigger and bigger.” 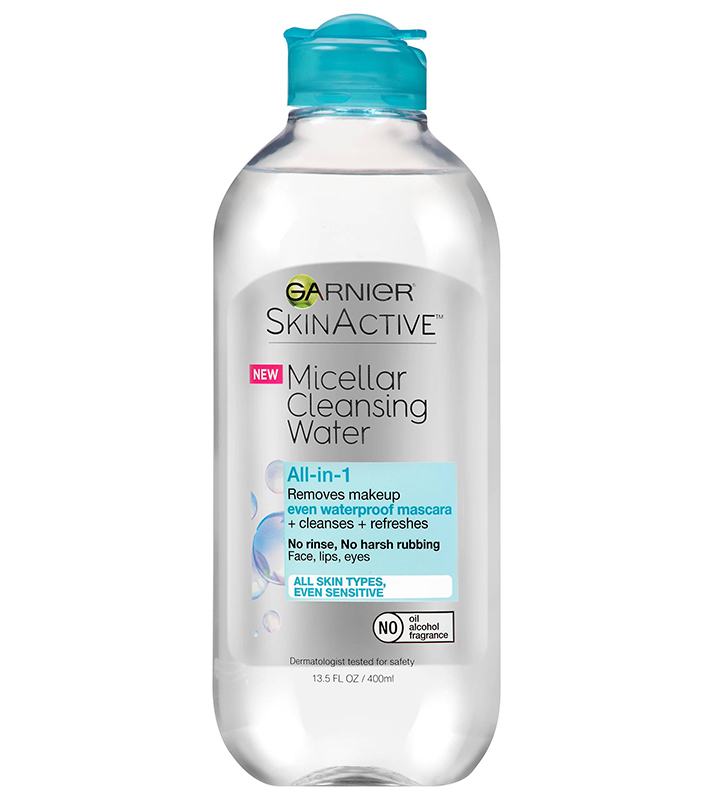 The user shared an insane photo of their bottle, which appears to have thick, white globs of the alleged bacteria or fungus floating in the water—and later, the user began to experience out-of-character breakouts and irritation. “For a while I didn’t realize [the water] was setting my skin on fire and breaking me out in tiny little red and white bumps all over my cheeks in localized clusters, giving me random red patches, and making everything I put on my skin sting like hell.” Of course, the user didn’t send their bottle to a lab for testing, so at this point, whether it’s bacteria, mold, or something else entirely is all pure speculation.

Still, like anyone would, the user assumed it was a faulty bottle and promptly threw it away. But after a few weeks of using a new bottle (this time, from Walmart), the cloudy particles appeared again—along with the user’s red and irritated skin. They concluded: “Please, if you’re using this product, check it and if it isn’t CLEAR when settled, be careful.”

Obviously, the community of self-labeled skin-care addicts had a shit-ton to say. Most consumers responded with caution, like one user who commented, “Oh god, that’s horrifying and disgusting, especially so because I actually have a bottle on my self and have been using it constantly. I just peered at mine, and while it looks perfectly clear right now, I’m going to be incredibly cautious and double check before using it in the future.” Others were concerned by the product’s lack of security seal. As one user put it: “One thing I have always thought is weird about this product (in addition to this issue) is that there’s no safety seal on it when you first open it.”

Interesting enough, a common idea suggested throughout the thread was that the alleged bacteria could have been infiltrating the water via cotton pads. The original poster responded, “I considered that bacteria may be getting introduced into it through the cotton, but the bottle cap is not the kind of cap you can really dip a cotton pad into… Regardless, I think if normal use can cause it to grow bacteria in a few weeks, then something is wrong with the preservative system.”

We reached out to Garnier team for comment, but did not receive a response by press time. We’ll update this story as soon as we hear back.