Excuse my lack of eloquence, but cutting straight to the point: facials are my jam. I’m in the camp that doesn’t dismiss long baths and Swedish massages as forms of self-care outside of therapy. Between the political landscape of our country and the general anxiety of being a twenty-something black woman, I deserve to be spoiled, even if it’s just a 10-minute mask in the middle of a busy week. That brings me to this Garnier Charcoal mask review, which I wasn’t expecting to write.

I keep a lot of face masks in rotation, half of which are from the drugstore because I appreciate a high-low routine. My introduction to this $8 gem came in a slightly unconventional way. Last month during a trip to Los Angeles, I linked up with Shani Darden for what I consider to be one of the best facials I’ve ever experienced. If you’ve never heard the name before and consider yourself a beauty expert, you’re definitely in the minority. She’s a go-to esthetician for more celebrities than I have room to share. So for the sake of brevity, here’s a short list: Emmy Rossum, Olivia Munn, Laura Harrier, Shay Mitchell, Jessica Alba, Rosie Huntington-Whiteley and Emily Ratajkowski.

Beyond her famous clientele, which I expect has grown in the midst of award season, the back-up-dancer-turned-skin expert also has a namesake product line. The most talked-about pick is Texture Reform ($95), a resurfacing retinol serum that utilizes lactic acid to exfoliate the skin without depriving it of moisture. What makes its word-of-mouth so overwhelmingly positive is the fact that it’s especially effective for sensitive skin types who would otherwise experience irritation with retinol. With all that being said, I was more than ready to have her bless my skin with an A-list treatment. 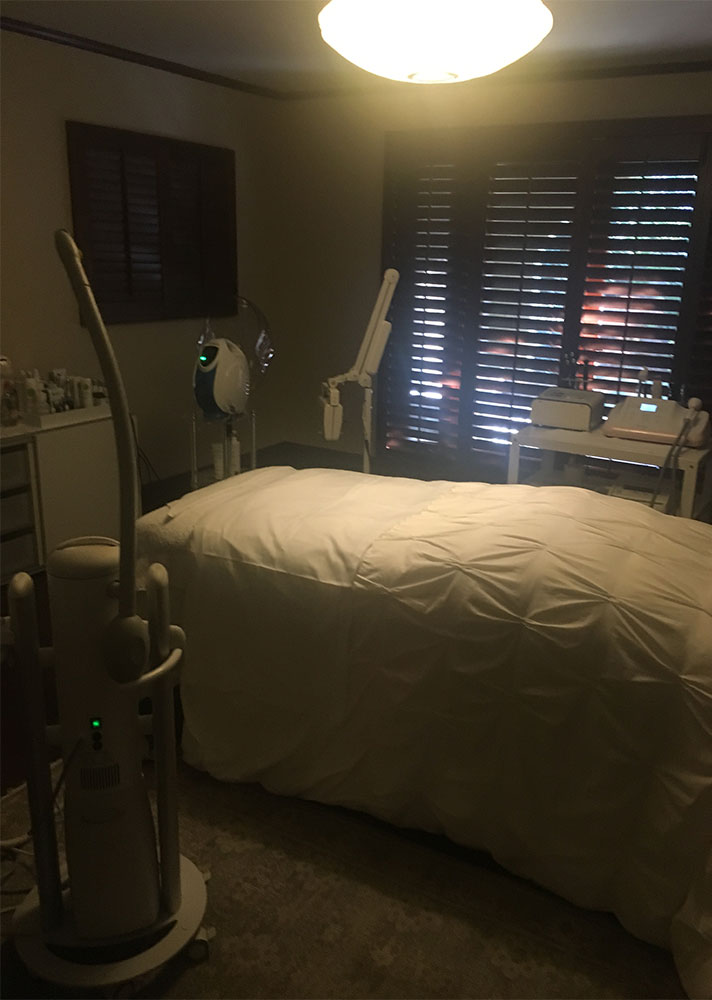 Upon arriving at her headquarters–a cozy house instead of a doctor’s office–I was led into a dimly lit room, complete with a tranquil playlist and plenty of fancy machines for me to ask about later. After getting onto the table where the magic happens, our appointment began with her examining my skin. Other than a “few spots on my cheeks,” she noted that my skin was in good shape, a compliment I wasn’t expecting but gladly accepted. From there, we started with vibration therapy to “tone, lighten and lift” my skin and soon transitioned into the itchiest part of the session: a lactic acid peel. I’m generally familiar with the alpha-hydroxy acid and its ability to exfoliate the top layer of skin. I’ve used it in the form of a cleanser, but rarely have I tried it in peel form.

Outside of the “not awesome feeling” Darden warned me about, what makes lactic acid a standout amongst other AHAs is the fact that there’s no downtime when used on a pro level. “It’s more of a hydrating peel. It doesn’t strip the skin. So you can pretty much use lactic acid on almost any skin type without having any problems. And because it’s just exfoliating that surface layer, you get a really great glow from it,” she told me. 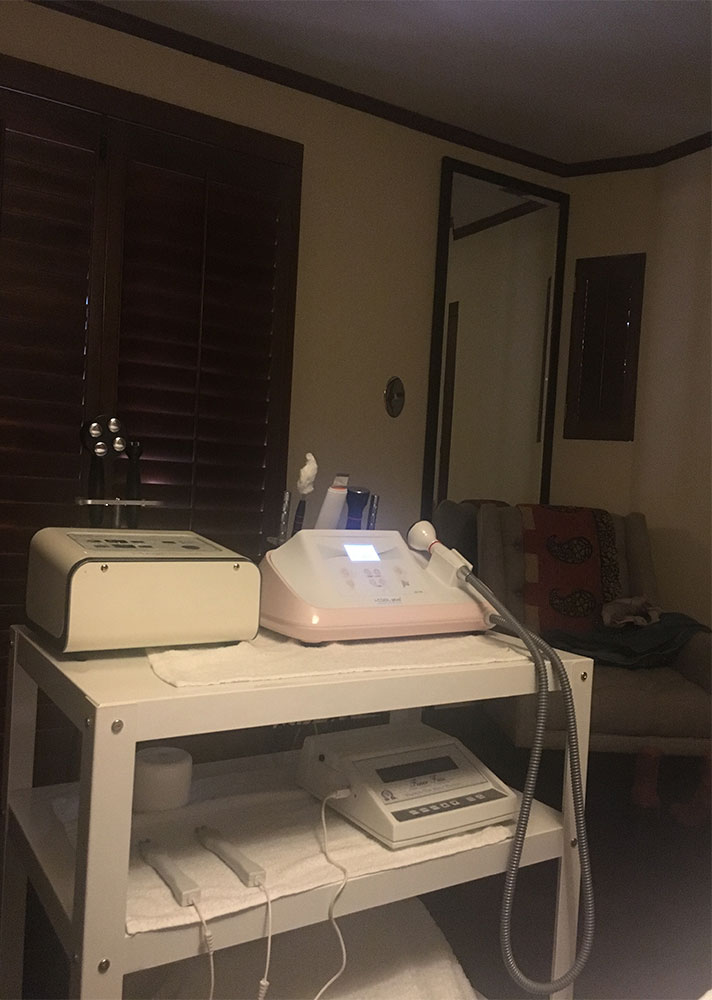 From there, she hit my face with a light steam treatment that I immediately had questions about. I’ve always been skeptical of facial steaming because up until this point, most experts have claimed that its reputation precedes the actual benefits. In short: it’s not doing much of anything. Well according to Darden, we shouldn’t believe it.

“The steam helps for any extractions that I want to do. It kind-of softens everything. Without it, it can be a more of a struggle to get anything out,” she explained while describing how she approaches breakouts. Speaking of pimples, I had a huge blemish on my cheek that she wasted no time extracting. Part of me panicked because I immediately though of the dark spot that would follow and likely take months to get rid of.

Thankfully, Darden reassured me saying, “When they’re bigger ones, it’s sometimes better to take it out because either way, you’re going to leave a dark mark. But when it doesn’t come out, you’ll have the dark mark for a lot longer. Some people don’t get extractions because they’re like, ‘but it’ll leave marks.’ Trust me–it leaves marks regardless. And the older you get, the slower it is to heal up.” Pimple-popping is expert approved? Say no more. 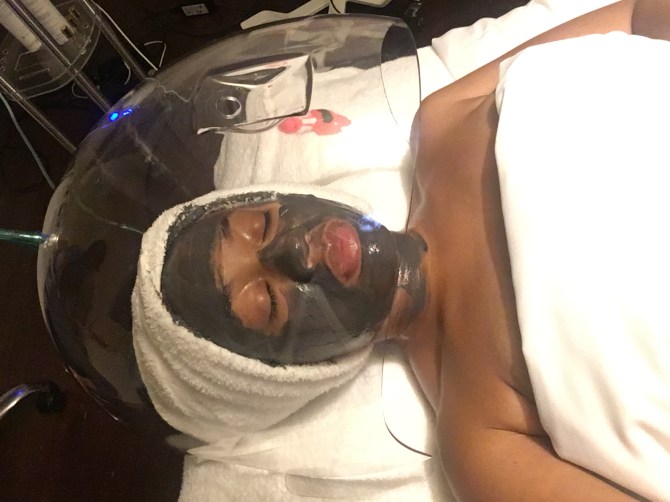 After the extraction, an ultrasound treatment followed to calm and help push product further into the skin. In this case, that product would be the Garnier SkinActive Charcoal 3 in 1 Face Wash, Scrub and Mask ($8). Once I got over the fact that this fancy treatment would be enhanced with something I can pick up at Target, she told me the charcoal was actually perfect for my oily, acne-prone skin and would compliment the peel’s effects. Plus, I can confirm that it’s literally the coolest, silkiest charcoal mask I’ve ever used. More often than not, the alternatives have been super drying, leading me to douse my face in oil; a no-no for oily skin types according to Darden. 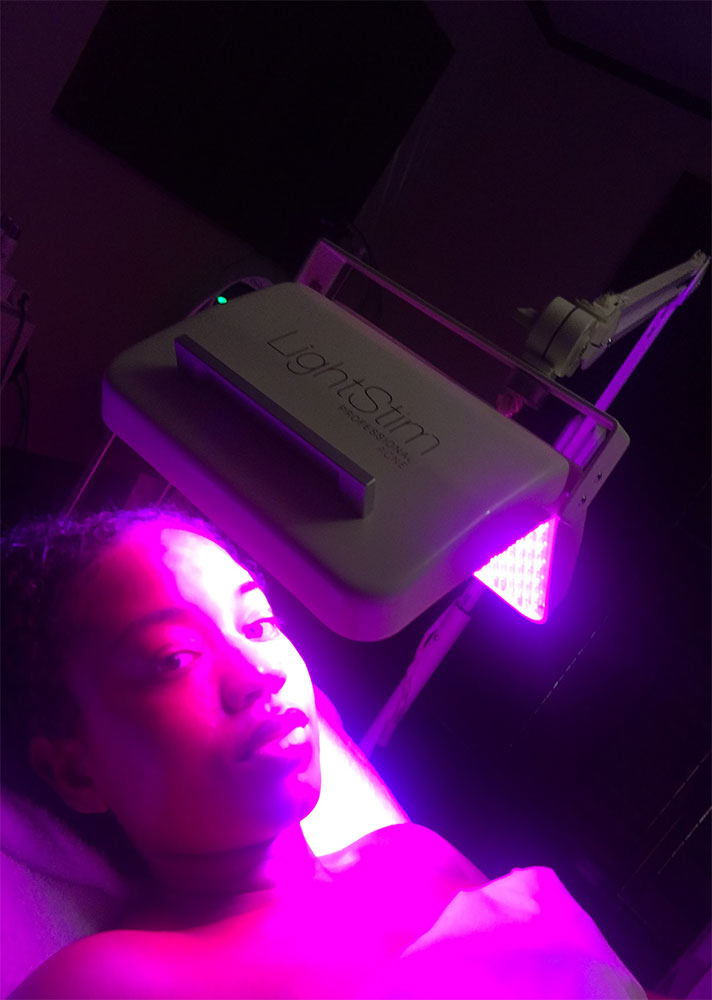 “I would stay away from oils, but that’s just my opinion. Some people will tell you oils for oily skin are great. I totally disagree. You want to stay away from milky anything. Milky is not your friend,” she told me while I sat under an oxygen dome. “Glycolic and salicylic might be great for you too. I find with acids, it’s really about trial-and-error so you can find out what your skin loves. Salicylic is really good for acne. If I were you, I’d be using an acne serum at night or a retinol. And everything else would be oil-free.” Duly noted.

As if this treatment could get any more luxurious, she finished our appointment with a few minutes of LED light therapy. “It’s really super relaxing,” she told me. “What red light does is it boosts collagen in the skin, decreases fine lines and speeds up healing. Blue light kills bacteria. So it’s a panel of both lights.” Fancy machines aside, the biggest takeaway from this once-in-a-lifetime experience is that at the end of the day, knowing what products work best for you is paramount. And if you’re super oily like me, this Garnier mask is a must-have.