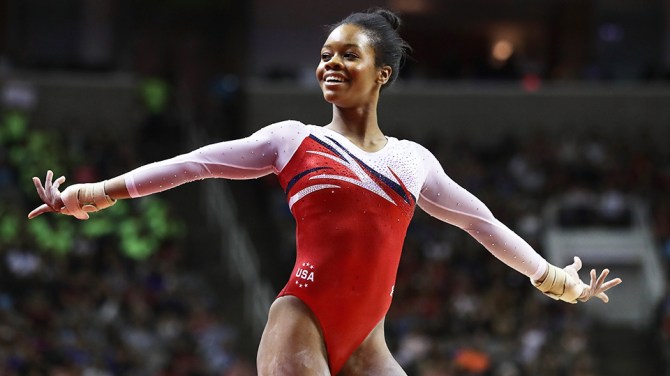 With the 2016 Olympic Games in Rio just days away, all eyes are on Gabby Douglas. But she’s used to the attention: The 20-year-old phenom won the world over four years ago in London when she became the women’s all-around champion—a coveted title she is set to defend this year—and made Olympic history as the first black women’s gold medalist.

MORE: How America’s Best (and Hottest) Divers Prepare for the Rio Olympics

In addition to her gymnastics accomplishments, Douglas has become a veritable businesswoman, with her own reality TV show, Barbie doll, line of unitards with GK Elite, and a New York Times best-selling book under her belt.

But training is always top of mind; you don’t score gold twice in a row without intense dedication. Depending on the day, Douglas can be found working with coach Kittia Carpenter upwards of six hours at a time, often with only one day off a week. We were surprised to find that she doesn’t have a strict diet, but it makes sense considering she has the incredibly fast metabolism of an athlete who trains nonstop.

“I try to eat very healthy foods and drink lots of liquids,” says Douglas, shocking us to our very core. “I include lots of vegetables and fruits and lean protein in my diet. I have my cheat days when I splurge, but I don’t go too crazy with it.” And when it comes to snacks, she’s into fruits, nuts, whole grain bars, and, oddly enough, bagels with peanut butter.

And though she could probably sit down at any of the world’s best restaurants, Douglas says she prefers home-cooked meals—with one exception: “There’s a really cool place in Downtown Columbus that I really enjoy called Forno Kitchen and Bar.”

Otherwise, she turns to the same place we do for recipe inspiration: to @buzzfeedtasty, @tastemade, @lovefoodextra. “I love salmon, mashed potatoes with grilled asparagus,” she says, mentioning her grandmother often cooks for her while she’s training. Olympic gold medalists: They’re just like us.