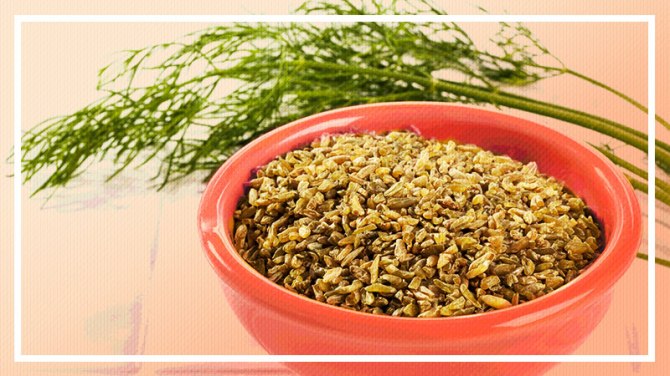 As someone who follows more fitness bloggers on Instagram than actual friends, I’m prone to getting overexcited about passing health and fitness fads. Whether it’s a superfood or a new kind of fitness class, I’m usually quick to hail something as the Next Big Thing. So when I started seeing my favorite bloggers and wellness insiders start obsessing over freekah–a grain I’d admittedly never before heard of–I decided to stave of hysteria for a minute and really put this so-called superfood to the test.

Like you, I’ve followed the wave of ancient grains becoming incredibly trendy on the foodie and fitness scene (quinoa, holla)–and although freekeh’s only started popping up in U.S. grocery stores recently, it’s been a staple in the Middle East for hundreds years. So instead of passively accepting that, as a centuries-old grain, freekah must be brilliant, I chatted with a bunch of experts, and ate the stuff in every meal for a full weekend. Here’s what I found out.

1. It tastes good (really good) with just about anything.

If you like the taste and texture of quinoa, you’ll enjoy freekeh. Once cooked, the flavor is actually quite strong, and has an earthy, nutty taste (like quinoa) and is quite chewy in texture (like brown rice.)

Unlike a lot of grains, this food can work for breakfast, lunch, or dinner. Take my food experiment as an example: For my freekeh-based breakfasts I created a sweet porridge-type dish, boiling about half a cup of the grain in one cup of water and half a cup of coconut water for about 20 minutes, adding in honey, almonds, banana, and strawberries at the end.

Later in the day I had a freekeh (boiled just in half water/half chicken stock this time) salad with kale, avocado, almonds, red onion, and edamame. Dinner was freekeh cooked in water with chicken and lemon vinaigrette. Aside from being super #Instagram friendly, both the sweet and the savory dishes worked with the freekeh.

Troy DeSemat, president at Freekeh Foods (where I ordered all of my Freekeh online) gave me some advice on how to cook the grain, recommending that I “Use a rice cooker on the brown rice setting, or the stovetop.  Bring 2.5 cups of liquid with one cup of Freekeh to boil, cover and let simmer for 20-25 minutes or until desired tenderness is reached.” By liquid, he means anything like water, coconut water, or stock–personally, I recommend trying it with water first, so you can taste the natural flavor before adding anything extra. 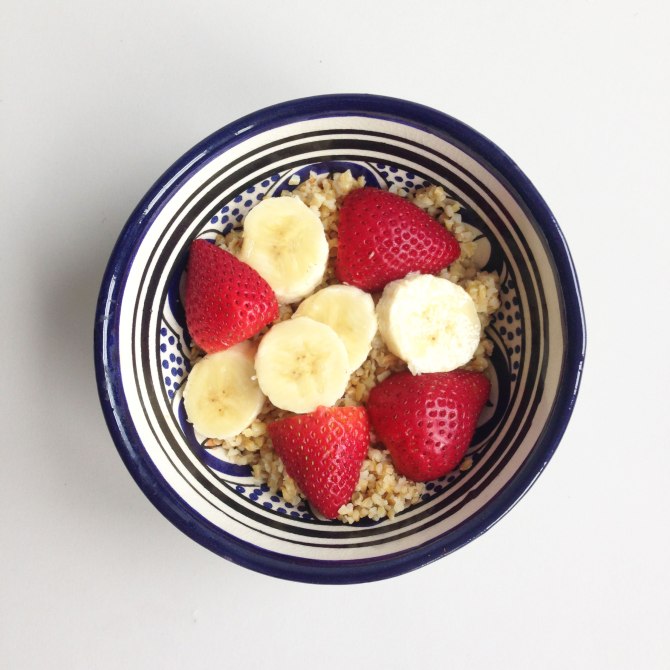 I’m not someone who often eats grains–instead my diet’s usually pretty protein and vegetable-heavy. So after a weekend spent eating freekeh with just about every meal, I expected to feel heavy and bloated by the end of my two day taste-test. Not so: In fact, not only did I not feel bloated, I noticed myself feeling fuller for longer and snacking less (pretty much a miracle by my popcorn-loving standards.) I asked award-winning dietitian and Clif Bar spokesperson Kate Geagan (you might have seen her dishing out advice on “The Dr. Oz Show”) to explain why.

She put it all down to the amount of fiber and protein in the ancient grain: “Because it’s an intact whole grain, which means you get the package as nature intended, it is an excellent source of fiber–actually about twice as much as quinoa per serving. Fiber, of course, is good for digestive health, slows blood sugar rise, and keeps you fuller longer after a meal, and can even be a source of prebiotics for your “good bugs” in your microbiome. Freekeh also packs twice the protein of brown rice and is a good source of B vitamins, calcium, iron and zinc.”

I have some news that might surprise you: You’re probably not gluten intolerant. Shocking, I know, but unless a doctor’s confirmed that you have celiac disease, gluten isn’t going to hurt you, despite what Instagram hashtags might convince you.

Troy explained to me what freekeh actually is: “Freekeh means ‘to rub’ in Arabic and is a roasted green wheat.  The production process involves harvesting the plant at a specific stage and bringing the Durum Wheat to processing within a short period of time.” So yes, because this is a wheat product, it contains gluten.

Dietician and author of The Flexitarian Diet, Dawn Jackson Blatner, told me: “Freekeh is not gluten-free, which is something many people falsely care about.”

She explains that many people feel great after following a gluten-free diet, but that has nothing to do with taking out the gluten. “It’s because you are eating fewer baked goods, less processed junk food and more naturally whole foods.” 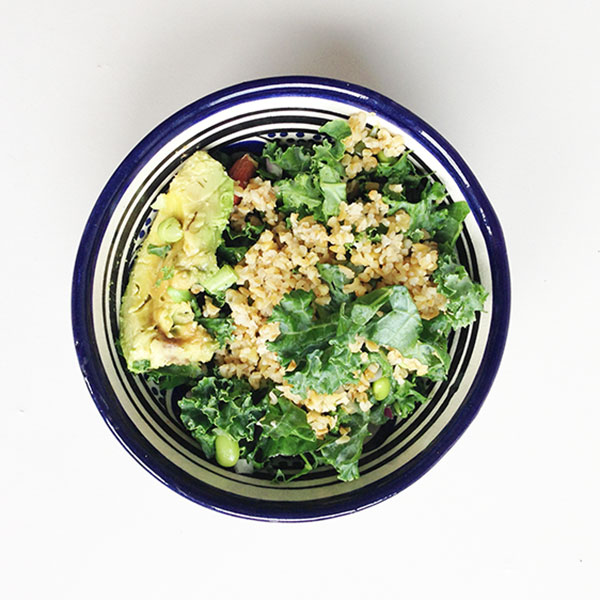 4. You won’t get fat from eating freekeh.

I’ll raise a guilty hand and admit that I’m one of those people who thought eating lots of grains would make me gain weight. So naturally, I assumed that sure, freekeh might be a nutritional powerhouse and packed with vitamins and fiber–but it’s probably also packed with calories, right? Wrong. Obviously two days isn’t long enough to notice whether my little food experiment led to weight gain, but I went back to Geagan for some insight. She told me not to worry, explaining, “Freekeh actually has fewer calories than quinoa or brown rice per serving.” You can consider that food myth busted.

The take away from my two day taste test was this: Yes, wellness bloggers are quick to call out something as the next superfood craze, but freekeh is one tasty, easy to cook, low calorie superfood that seriously lives up to the hype–at least in this editor’s eyes.

Want to try it out for yourself? Head to Freekeh Foods to order a case of six packets of organic freekeh for $14.40.