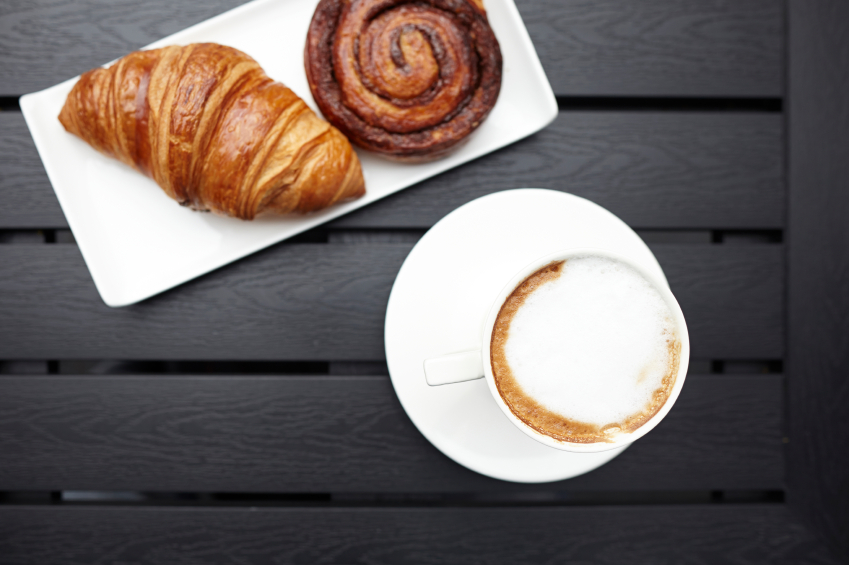 You wash your face daily and take your makeup off before bed like you’re supposed to. So why is your skin far from glowing? Well, even though what you put on your face matters a whole lot, what you put into your body also reflects back onto your skin, according to leading nutrition experts.

Here are eight foods (and drinks!) to stay away from if you’re having skin issues—or if you simply want your skin to look its best every single day.

1. Chocolate: For years we’ve heard myths about how sweets can make you break out, and the  (not-so-sweet) truth is that these stories are true. According to nutritionists Jayson and Mira Calton, co-authors of Naked Calories
, chocolate may actually make acne worse. Citing a study conducted in the Netherlands, they say that chocolate increases production of interleukin -1b, a marker of immune system inflammation, which increases the inflammation due to acne. Chocolate can also increase production of interleukin 10, which lowers the body’s immune defense, which could create conditions that allow bacteria to infect pimples, then worsen them.

MORE: The 10 Foods You Need to Eat For Your Summer Bikini Body

2. Bread, Sugar, and High Carb Foods: The Carltons saw the effects of a high-carb diet when they traveled to Papua New Guinea, where no one seems to have acne. They say that this may be due to the fact that people there eat low glycemic foods, and leave out things such as bread. The increased insulin levels in carbs causes the skin to secrete sebum, a greasy substance that attracts acne-promoting bacteria, as well as causes inflammation in the skin.

3. Whole grains: While whole grains are better for you than white ones, celebrity nutritionist JJ Virgin, author of The Virgin Diet
, says that even complex carbs can be damaging to your skin.  Especially for gluten-sensitive people (and that’s most of us), any kind of gluten can create inflammation and an immune response that can result in acne and other skin problems.

4. Dairy: The Carltons say that there is something called IGF-1 (insulin growth factor) in milk, which is similar to insulin and can cause an increase in sebum, the oily substance that clogs pores for some people. Crazily enough, as little as one cup of milk can cause this. Virgin says that skim milk in particular can cause other skin issues as well: Removing the fat from milk means more lactose (sugar) that can contribute to rosacea, acne, and other skin problems. Try eliminating dairy for two weeks to see if this could be causing your acne.

5. Soy milk: Soy is another highly reactive food that can create an immune reaction and inflammation that create skin problems, Virgin tells us. “I see this often with vegans and vegetarians especially, who over-rely on soy, which eventually becomes a food intolerance,” she explains.

7. “Empty” foods: It’s no surprise that foods lacking in nutritional value are not so great for your skin. Nutritionally empty foods like candy or French fries, for example, not only spike blood sugar but lack antioxidants, which fight free radicals for younger, more radiant skin, says nutritionist Mark Macdonald, New York Times best-selling author of Body Confidence. The big culprit contributing to these skin issues is salt, he says. “High salt food and even table salt increases bloating and gives you that puffy eye appearance. Replace high sodium, processed foods with natural foods—not in a box, package or can—as often as possible and skip salt at the table.”

Virgin adds that even foods that seem good for you with labels like “fat-free” are equally as bad—after all, they’re processed. “‘Fat free’ almost always means increased amounts of sugar, preservatives, and other junk that can ruin healthy skin,” she says.

8. Alcohol: Yep, another one of our favorite vices dehydrates the skin and makes us look older and washed out, MacDonald says. “Hydrate your skin with at least two liters of water per day—preferably working your way up to three to four liters—for a ‘fresh’ appearance, and limit alcohol as much as possible,” he suggests.