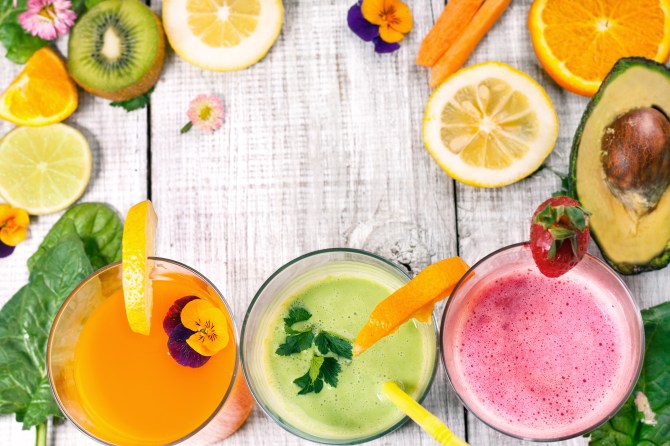 For the last few years, every fitness blogger, Instagram star and pseudo internet health expert has been championing the three- or five-day juice cleanse as the ultimate detox—some obsessives even swear by sticking to liquids for a week. Admittedly, I was one of those sad fad-diet followers who jumped on board the cold pressed trend. “Glowing skin and rapid weight loss,” I thought, “Where do I sign up?”

Now, the liquid juice diet is receiving the type of backlash other extreme fads (talking about you, lemon detox diet) have experienced. It’s the kind of hate that happens when enough people actually try the trend and discover it’s nothing more than another crash diet.

Maybe I’m crazy, but personally I just prefer chewing my food, and the juice “detox” diets I’ve tried leave me feeling exhausted, grumpy, unable to exercise, and desperate for a burrito—which I usually inhale moments after finishing my last juice.

Increasingly, experts are warning against long-term juicing too, labeling them as extreme and dangerous, and explaining that they also lead to bad eating habits. “Long-term juice cleansing can lead to deficiencies as well as to yo-yo dieting, which itself can lead to a whole host of problems,” cautions celebrity nutritionist and author Keri Glassman.

Some juice cleanse fans claim that juicing is better for your cleanse than eating whole fruits and vegetables because it’s easier for your body to absorb nutrients, and your digestive system can take a breather from working on fiber. However, there’s really no strong scientific evidence to support the idea that extracted juices are somehow better for you than eating the whole vegetable itself.

“The best cleanses don’t follow an all-liquid diet, include any weight loss pills or powders and are not meant to be followed for a long period of time,” says Glassman. “Steer clear of a cleanse that requires you to invest a lot of money or requires really extreme practices.”

Oh, and you know your kidneys, skin, and urinary system? Well, all of those things do a pretty brilliant job of detoxing your body just fine, without the help of some crazy, liquid-only diet.

“What many people don’t realize is that your body is a natural cleansing system built to detox all the time, if you treat it right,” explains Glassman.

Instead, she recommends eating an organic, whole food–based diet for about four days if you want to break unhealthy habits and reset your mind and body. Afterwards, you can expect to feel less bloated, more energetic, and could drop around two to six pounds.

“The best way to stay cleansed is to consistently eat organic greens and lots of other veggies, and carefully portioned organic fruit and healthy fats,” says Glassman. “Follow a high-in-fiber diet with plenty of water, and take out all packaged and processed foods.”

Here are a few of Glassman’s tips for following a four day whole food detox that will actually lead to long-term, healthy (burrito-free) eating habits.

News flash: Cleansing or detoxing is not synonymous with starvation. Keri recommends eating five to six small meals per day that incorporate “real foods like fresh vegetables and fruit, healthy fat and lean protein.” She also added that juices do have a place in cleansing, and while you shouldn’t stick to an entirely liquid diet, it’s fine to have a veggie juice instead of a regular snack.

Cut out these foods.

Glassman’s idea of a good cleanse is one that removes all processed foods—so for the next four days, ditch the packaged crap. “You’ll find most cleanses limit or omit processed foods, especially carbohydrates and unhealthy fats, as well as dairy, because they are more challenging to digest and process,” explains Glassman.

“Drink lots of water,” is one of those annoying health tips experts and celebrities often recommend. Glassman’s tip is a little different though: While she recommends drinking eight eight-ounce glasses per day, she also suggests you add a squeeze of lemon juice and a dash of cayenne into each cup. “Cayenne can help you feel satisfied and has been linked with boosting metabolism,” she notes. She also suggests adding one ounce of aloe vera to one of your cups of water each day.

Tea fans should switch to green or herbal teas, and try to down two cups of green tea during the cleanse, while also drinking plenty of other herbal tea—especially dandelion root tea and fennel tea.

Keep some of your cleansing habits.

While you can go back to eating the occasional bagel after the cleanse, you should still be able to incorporate a lot of the eating habits you created during the four days into everyday life. A juice cleanse is completely unsustainable, but a whole food cleanse sets you up forever.

“Feeling physically and mentally better during a whole food cleanse will help motivate you to not only stick with the cleanse for four days, but also to continue to incorporate the healthy habits you learn into your daily life for the long haul,” promises Glassman.

Next time you’re considering starving yourself with a liquid, juice-only diet, maybe try this instead—I know I will be.

Head over to Glassman’s website, Nutritious Life, for some of her favorite whole food recipes to try during your cleanse.