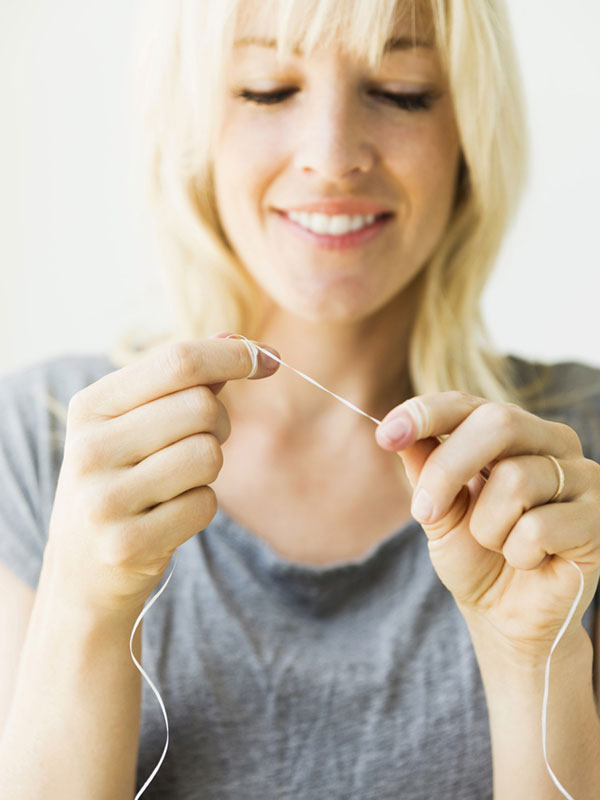 It’s your toothbrush’s trusty counterpart, and it’s saved you from embarrassingly smiling with chia seeds, chocolate, or any tiny particle of food wedged between your teeth for hours on end. Floss is a miracle-worker, for sure. After visiting with this teeth tool daily (as we all should be, anyway) and listening your dentist’s advice after your appointments, the importance of regularly setting aside time for a flossing session for the sake of your pearly whites and gums is clear. It may come in tiny, purse-approved packaging that doesn’t seem to get as many advertized advancements as brushes, but this stuff is packed with power. Read on to find out 10 things no one ever tells you about flossing your teeth.

MORE: What No One Tells You About Hormonal Acne

1. Most floss packages come with yards upon yards of the stuff. So how much do you actually use per session? Colgate suggests taking about 18 inches, wrapping the excess around your middle finger to create a taunt surface, and using about one to two inch-sections of the string to floss between each tooth. Remember to use clean sections between each, too!

2. Flossing in general is of more importance than when you do it, but it’s been reported that flossing before you brush your teeth might be helpful! It’s been said that it could help loosen up particles that can then be removed by brushing your teeth afterwards.

3. Flossing actually helps fight against bad breath, as it gets rid of the bacteria and plaque that lands and then lives between your teeth and can contribute to the unpleasant fragrance.

4. According to the American Dental Association, floss was once made from silk fibers, but now it’s made of a combination between nylon filaments and plastic monofilaments. It can also be waxed and unwaxed.

5. Flossing can contribute to making your teeth appear whiter by clearing out food and bacteria, but you can also buy whitening dental floss on the market. What’s it do? According to Oral-B—a brand that also sells whitening floss—some of the products out there are made with what they call a “calcium peroxide” which dissolves proteins that are found on the teeth that can lead to discoloration. They also note that whitening floss doesn’t actually bleach your teeth.

6. Flossing is a big player in preventing gingivitis and periodontal disease. When you don’t floss or brush your teeth enough to remove the bacteria and plaque, you gums can become inflamed and shift, forming pockets between your gum and teeth. This section can then be invaded with bacteria which can lead to much worse scenarios, like the bone and tissues being harmed and destroyed.

7. If you only decide to floss once a day, try it out before you head to bed. According to Yahoo!, flossing at night can help you remove the food and other not-so-great particles that have built-up in your mouth during the day. Gross, yet true.

8. A 2008 survey of 1000 people between the ADA and Crest, revealed that only 49 percent flossed once a day or often. In addition, 10 percent admitted that they never flossed.

9. Floss picks make it easy to reach tight spaces between your teeth, especially if you have a hard time holding it and getting it around each tooth. Tons of brands offer floss picks in a variety of forms and prices, including waxed, unwaxed, and whitening. And if you’re on-the-go and noticed something in your sitting in-between your teeth that’s not supposed to be there, we’d assume these would get the job done.

10. A helpful reminder—you shouldn’t reuse floss. The ADA says that it can lose its effectiveness, transporting bacteria back into your mouth after you’ve removed it, and even break! A successful flossing session should include gently sliding the floss between two teeth, taking it up to the gumline. Once you’re there, the Mayo Clinic suggests curving it against one tooth and then rubbing it up and down in tiny motions.

MORE: What You Should Know About Beauty IVs