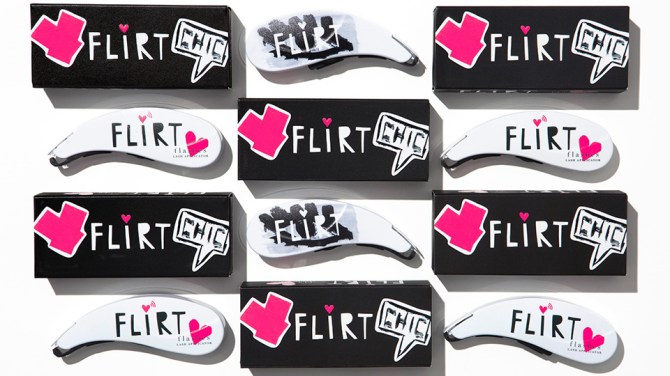 Just a day after Estée Lauder gave us a peek at its amazing collaboration with Victoria Beckham, the brand made another fun announcement: It’s teaming up with Amber Rose—who’s having one helluva month herself, thanks to the debut of her new VH1 talk show, “The Amber Rose Show,” and Instagram-famous illustrator Donald Robertson—or @drawbertson, as he’s known on the ‘gram—on a new stand-alone company, Flirt Cosmetics. Presumably, the brand is going to be Instagram-first, which makes sense considering Amber, who’s fronting the brand, has more than 12 million followers. Meanwhile, @drawberton, who has almost 200K, designed the kitschy packaging.

MORE: Amber Rose’s Long Braids May Have Just Knocked the Earth Off Its Axis

The brand is built on one product: false lashes. The hero product (and right now, only product, though there’s more coming down the pike), is an all-in-one false lash applicator. The $28 contraption looks sort of like one of those new-fangled white out cartridges, and it dispenses false lash buds in sets of three.

After you dab on a bit of glue, you click the pen, stick it to your lash line, and, uh, that’s it. It’s really that easy—even if you’re false-lash-challenged like myself. There’s even an Android app for tutorials and other video content, presumably featuring Amber.

Probably the edgiest of the Estée brands—you may gave heard of M.A.C and Aerin, two of Lauder’s other stand-alone success stories—Flirt Cosmetics officially launches on September 15.