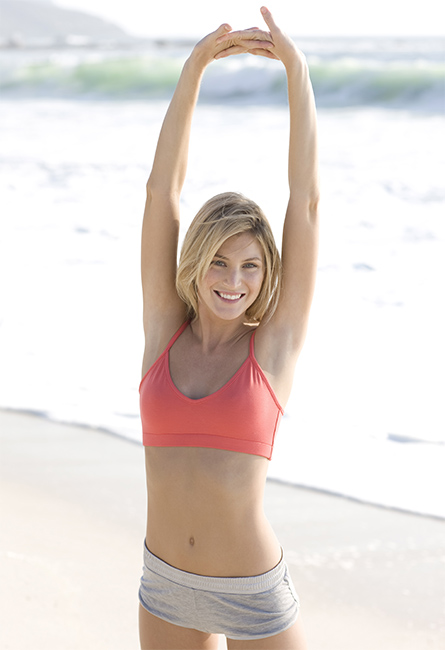 It doesn’t matter whether you’re a verified fitness junkie or just making your way into the fitness world: The same fitness myths have been flying around for decades, and while some of them can claim more than an ounce of veracity, plenty of them aren’t only incorrect but also dangerous when believed. Here’s the plain truth behind some of the most commonly heard fitness myths out there.

Myth: If it doesn’t hurt, or if you’re not drenched in sweat, it isn’t working.
Reality: Your muscles may burn during a particularly tough spin class, but most of the pain component in the “no pain, no gain” motto should be felt days after the workout, not while you’re doing it. In fact, any kind of noticeable pain you’re experiencing during your training is likely a sign of an injury or something wrong rather than a sign that you’re working really hard. And as for sweat, just because you’re sweatier than usual after a run doesn’t mean you worked harder than ever. Sweating is your body’s natural cooling mechanism, so it may just be a few degrees higher than usual outside or in your fitness studio.

Myth: You can target problem areas with strength training.
Reality: As nice as it would be to score killer abs from crunches alone, the truth of the matter is that sit-ups alone won’t turn your gut into a six pack. They can, indeed, strengthen your abdominal muscles, but you won’t get the visual impact unless you’re also working to lower your body fat. Strength training helps to build muscle, but you won’t see those muscles if they’re covered in fat.

Myth: The more you work out, the better.
Reality: Believe it or not, your body actually needs rest days to recover in between workouts. When you’re building muscle, what your body is really doing is forming small tears in your muscle. Muscles become stronger when they’ve repaired themselves, and if you’re doing the same activities and overworking your muscles every day, they won’t get a chance to repair, and then you’ll be injured, not stronger or fitter. This is especially true for those who have just begun a fitness routine—beginners should rest up one day in between vigorous workouts, while the more experienced can get away with cutting it down once a week.

Myth: Weights will make your muscles unattractively bulky.
Reality: Cross this one off your list altogether. Unless you’re taking steroids, there’s no reason to be concerned that you’ll suddenly develop huge, manly muscles. There’s a reason we associate big muscles with being manly—getting that big requires high levels of testosterone, which women typically lack. We also have less muscle tissue than men altogether, so go ahead and lift those heavy dumbbells.

Myth: If you’re trying to lose weight, you should focus on burning calories through cardio, not building muscle.
Reality: Cardio is great for your heart and for calorie-burning, but weight loss is subjective. We’ve all heard time and time again that muscle weighs more than fat, and it’s true. Someone can weigh less with less muscle tone and look bigger than someone who weighs considerably more but has more muscle tone. Strength training with weights and your body weight is absolutely critical for weight loss and overall toning. The more muscle you have, the more efficient your body’s metabolism is—having more muscle actually makes working out and losing weight easier than cardio alone. If you’re trying to lose weight, start with your diet, because fat loss happens when you’re expending more calories than you’re taking in, then focus on building muscle rather than simply burning calories.

Read more: The Lazy Girl’s Guide to Getting Fit