Kacey Musgraves just wrapped up her record-breaking “Oh What a Wonderful World Tour’, and per usual, her concert fashion and glam were next-level. Kacey is not afraid of color and her hair is always on point. Whether she’s rocking a bouffant or has her long raven locks sleek and parted down the middle, it always looks gorgeous. Recently, her hairstylist Giovanni Delgado truly outdid himself with sparkly tinsel hair extensions during two of Kacey’s shows.

She first wore them in a high pony at her New Orleans show. And she brought them out again at her show in New York City at Radio City Music Hall. After seeing Kacey rock them, I had to get some of my own. So I made an appointment to have Finklepott’s Original Fairy Hair installed. This isn’t my first rodeo with the brand (I wore them from December 2018-February 2019), but I couldn’t help but experience the magic again. Plus, it’s festive AF, and heading into the holidays, I’m here for the extra sparkle.

Finklepott’s strands aren’t tinsel, but they look like it. They’re actually made of silk and cellulose, and come in a bevy of colors and different sheens. Some are holographic while others are metallic. Each strand is fused to a single strand of your hair and by fused, I mean they’re tied in like your standard hair extension (the exact process is a trade secret). According to the site, you can “wash it, brush it, comb it, curl it, flat iron (up to 450°), color it, straighten it, perm it, blow it dry, get your haircut, etc.” (Note: this is not the case with actual tinsel hair, which can be flammable and may destruct with heat and other chemicals.) 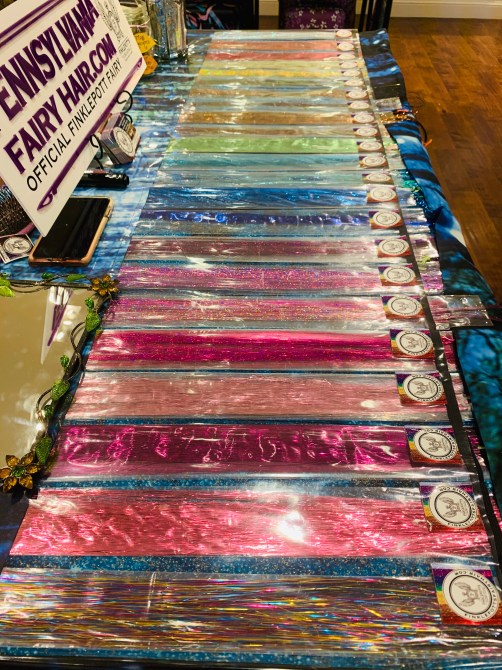 As for how long the fairy magic lasts, it varies from person to person. Each strand lasts as long as that one piece of hair stays on your head. It could be a day, a week, a month, several months, or even up to a year. According to the site , most adults retain theirs for a few months. I can personally confirm this, given my previous experience; I only made a ‘touch-up’ appointment one month in to replace a couple that had fallen out. This time around, I went with more ‘subtle’ chocolate and copper metallic colors. Price-wise, I had 20 strands put in for $50. (This is their ‘average’, but you can get as little or as many strands put in.)

I was also happy to accept a few tips for longer wear. First, it was recommended that when brushing my hair, I use a wide-tooth comb and start from the ends. This will decrease the likelihood of pulling out the fairy hair extensions, which are installed close to the root of each hair strand. I was also told to stay away from rubber bands without protective coating and the trendy coil hair ties since they can tug and eventually pull out the extensions too. (I’ve been using silk scrunchies as an extra precaution.) 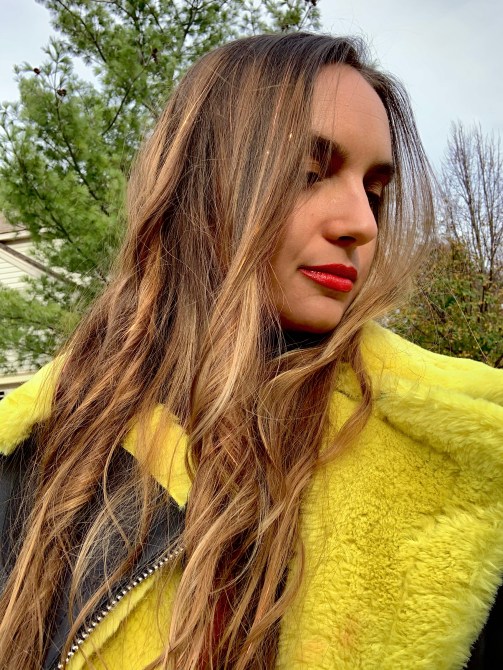 I am one week in and have only lost 2 strands (that I know of) so far. Again, I’m being mindful of not yanking on my hair, using silk scrunchies, and not washing my hair every day, which helps with longevity. The compliments are certainly great and I truly believe the fairy vibes help brighten a passerby’s day. But what I love most is that they’re a temporary way for me to feel more glam without the extra leg work.

The only caveat is that they’re only available in a lucky 13 states and require linking up with a “Finklepott Fairy” who can handle the install process for you. Fingers crossed for an expansion sooner than later because word is spreading fast and it’s good. For now, learn more about at the brand’s website, where you can find a fairy with the hookup.