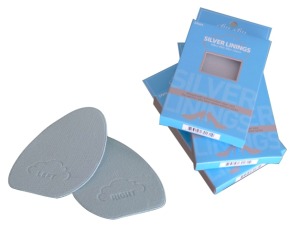 Sweating–not the most glamorous topic in the world, but a problem that affects all of us ladies in one way or another.

One of the biggest problems I have, especially come summertime, is the issue of sweaty feet. A lot of my shoes, while adorable, aren’t exactly breathable. This leads to sweating, which invariably leads to stinky feet.

While the problem of smelly feet is annoying enough as it is, what’s worse is when it causes you to ruin a pair of shoes. I’ve had plenty a pair of cute ballet flats that have had to be tossed before their time due to funky odor.

That’s why I’m loving these new shoe inserts from Chu Su New York. Called Silver Linings, they’re super-thin liners infused with silver-based technology. Silver is said to be antibacterial, so it will kill the bacteria that causes funky odors before it has the chance to invade your footwear. It comes sold in a set of three and each pair lasts for up to one month. They’re a great way to extend the life of your shoes, saving you some major $$$.