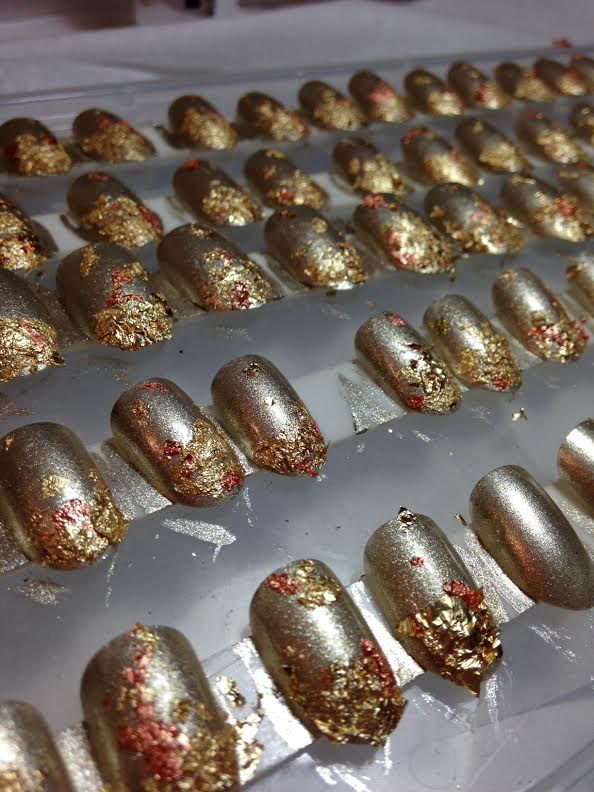 We all love to look at gorgeous runway images of models, but often forget the hours of work that designers, stylists, makeup artists and nail artists put in before getting to that finished product. As we dive into yet another season of fashion “month,” we wanted to get into the specifics, and learn what really happens as some of our favorite talents in the business get to work on their masterpieces.

We checked in with MAC Cosmetics Senior Artist Keri Blair as she began brainstorming ideas for the nails for the Desigual Fall 2014 show, to find out exactly what went into the process as she worked with the designers. Blair explained that this season, the concept was all about love. From the clothes to the hair to the makeup, the designers wanted the show to be romantic and sweet, with a focus on gold. She was also told that they were looking to do a fun element on the body of the models where they would be creating a stocking seam to run up the legs that may say “love” in at as well. 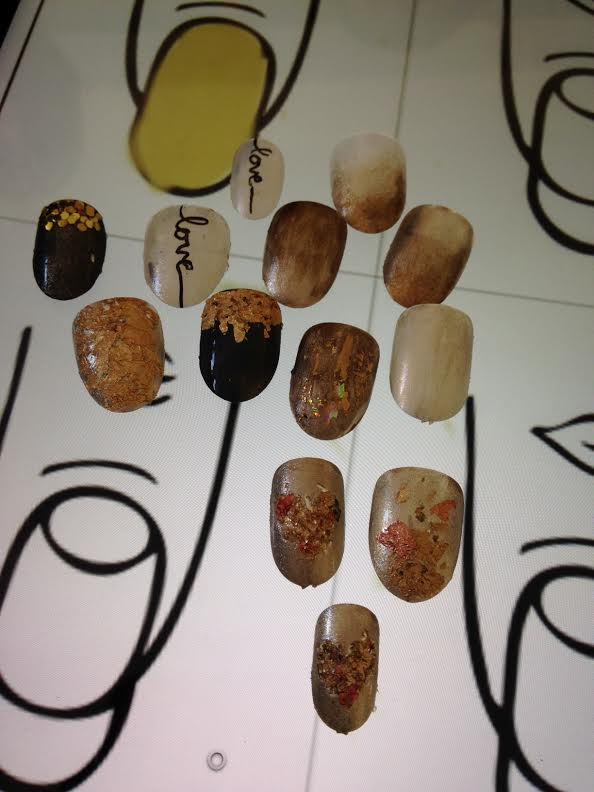 With that information, Blair went to the drawing board to create her first set of nail concepts to turn in to the designers. Since they wanted to focus on gold, her first idea was to do an ombre gold nail. She also mocked up a nail with “love” written down the center, sort of like stocking that they had talked about creating. But, Blair noted that you have to think about how the nails will be perceived on the runway – when they have small details, they’ll look great in backstage photos but for the audience, they won’t know what is on the nail. So, in the end she had to consider what will get the most impact and how to create something uniformed while taking their theme inspiration but not making it too literal.

MORE: Backstage Beauty: How to Get the Velvety Eyes at Richard Chai

Blair then took about 15 different nail mock-ups to meet with the designers and discuss the nail look. She had a mix of textures and gold, and everyone decided that their favorites were the ones with gold leaf – in particular the one that was sort of “raining gold leaf, where it culminated at the tip of the nail.” So, Blair said that that was where they really started off when they met to discuss the nail, and decided how they wanted to place and layer the gold leaf.

Now that the nail was decided, Blair had to actually create enough of them for the models. Because Desigual wanted the nails to have a “sporty chic” look, Blair had to shape each of the fake nails before she painted them. To make enough nails for all of the girls in the show, she had to paint 300 nails in total (painting a couple of extra thumbs just in case, since those are the most noticeable of the fingers). Blair used two coats of MAC Cosmetics’ Screaming Bright on all of the nails, then let them dry and used Overlacquer to get the nail a little bit tacky to help the gold leaf to stick. Then, she placed the gold leaf on (focusing on the bottom of the nail) with a tweezer. Blair then added in a few leading to the cuticle, giving it a “raining” effect. Once it dried, she added a top coat.

All in all, Blair spent between 25 to 30 hours physically making the nails from start to finish – over the span of just two days! While it was of course a labor of love according to Blair (and oh-so-fitting considering the theme), we can’t imagine making 300 nails in just a matter of days. But we are so glad she did – now we just have to try to replicate it on just 10 of our own fingers.